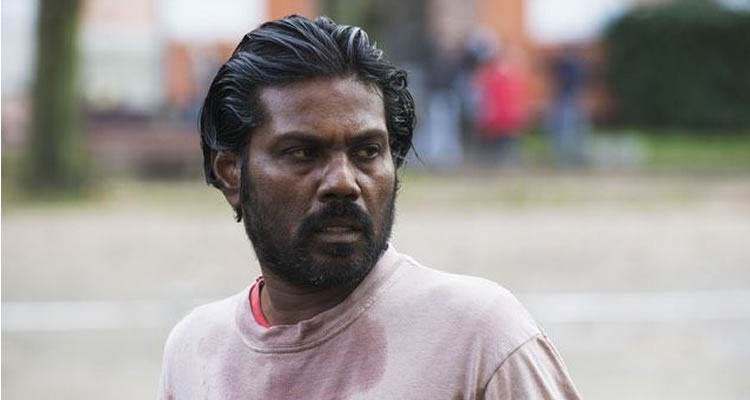 DHEEPAN (France/15A/109mins)
Directed by Jacques Audiard. Starring Vincent Rottiers, Marc Zinga, Jesuthasan Antonythasan, Kalieaswari Srinivasan, Franck Falise, Claudine Vinasithamby
THE PLOT: Dheepan (Jesuthasan Antonythasan) moves from war-torn Sri Lanka to France with Yalini (Kalieaswari Srinivasan) and Illayaal (Claudine Winasuthamby). To all intents and purposes, they are a family trying to escape the horrors of their home country, but the three are travelling on the passports of the dead; this secret unites them, and also almost becomes their undoing.
THE VERDICT: DHEEPAN is the first film by director Jacques Audiard since 2012’s RUST AND BONE, which also premiered at Cannes. Dheepan tells the story of an immigrant family, held together by a secret. The film opens with Yalini running around a slum town desperately searching for a child; it seems that she and Dheepan need a child to travel with for their story to work, but far from kidnapping the 9 year old girl they end up with, she is an orphan whose aunt seems to willingly hand her over.
Kalieaswari Srinivasan, as Yalini is, in many ways, the heart of the story. She plays the character well, making her gruff and ruthless, but eventually gentle and kind. Jesuthasan Antonythasan holds the family unit together as Sheepan. It is clear this man has a secret or two of his own, but he seems to be the most compassionate toward his adopted daughter. Antonythasan also makes sure that Dheepan has a dark and dangerous side, which he uses to keep the family in check. Claudine Winasuthamby plays Illayaal as quiet and respectful, utterly bewildered by the new world she finds herself in, but not afraid to speak her mind. The rest of the cast is made up of Vincent Rottiers, Marc Zinga and Franck Falise.
Much like RUST AND BONE, Audiard makes Dheepan a story of trust and adjustment as this family get to know one another. Transplanted to Le Pré, Dheepan works as a caretaker in a complex home to violent gangs, although he keeps his head down and they accept his presence. Yalini finds herself getting deeper into the world of the gangs as she cares for an elderly man, and Illayaal struggles with the transition to school, and making friends. The story is slow moving, but emotionally engaging for much of the film, but everything comes together once war breaks out between rival gang members. This allows the audience to see the true colours of the characters we have been watching, and the decisions they make in order to survive.
As director, Audiard makes DHEEPAN a family drama set against the backdrop of secrets, lies and an encroaching sense of danger. Although much of the film is slow moving, the human story being told is engaging enough to keep the audience rooting for this newly formed family. The final act of the film is an utter change in pace, and is jarring at first, but the emotional groundwork has been laid carefully enough for the audience to accept this sudden change in circumstance and energy.
In all, DHEEPAN is the story of a family coming together and falling apart. The performances are strong and engaging, and although the final act is a sudden change in tempo, we learn enough about the characters in the first two acts for this to be accepted.
RATING: 3/5
Review by Brogen Hayes