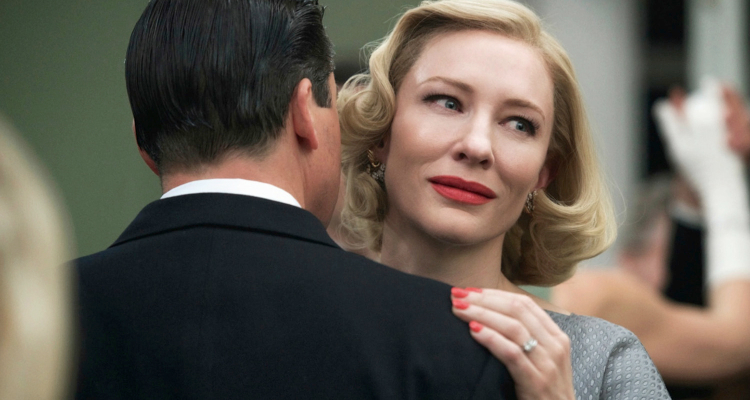 CAROL (UK | USA/TBC/118mins)
Diecred by Todd Haynes. Starring Cate Blanchett. Rooney Mara, Carrie Brownstein, Sarah Paulson, Kyle Chandler.
THE PLOT: Therese (Rooney Mara) first meets the aloof but curiously magnetic Carol (Cate Blanchett) when she serves her in an upmarket department store. The two women soon become friends and, as Carol’s divorce from Herge (Kyle Chandler) turns ugly, the two grow closer. Herge, however, is unable to let Carol go, and begins to use her relationship with Therese as a weapon in their divorce.
THE VERDICT: There has been much talk of CAROL for some time now, so it is hardly surprising that this tale of forbidden love in 1950s America was one of the most highly anticipated films at this year’s Cannes Film Festival.
Blanchett is on enigmatic, engaging and slightly scary form as the title character, making the character aloof and beautiful, with a feeling of a shark circling Mara, and a layer of vulnerability not far below the surface. Mara is perhaps the best she has ever been as Therese, the young ingénue who knows she doesn’t want to marry her boyfriend, but is not always quite sure why. The chemistry, affection and respect between Blanchett and Mara runs deep on screen and they are a joy to watch together. The rest of the cast is made up of Kyle Chandler, Sarah Paulson and Carrie Brownstein in a small role.
Phyllis Nagy’s screenplay, adapted from Highsmith’s novel, is careful in its portrayal of a romantic relationship between two women, never straying into gratuity, but making the connection between the two feel real and honest. The dialogue creates a shiny layer on the surface of the film, which is allowed to crack from time to time, and show the vulnerability and fear inherent in these characters.
As director, Todd Haynes makes the world of the film beautiful and rich, but fills it with shadows and secret corners. Haynes makes Blanchett and Mara’s characters and performances the heart and soul of the film, but it is truly with Blanchett that the film lives and dies. In fact, when Blanchett disappears from proceedings in the second act, she seems to take the pacing with her, meaning the film drags its heels for several minutes, before recovering when she returns. The film has touches of great love stories of the past, calling to mind classics like DOCTOR ZHIVAGO, CASABLANCA and THE AGE OF INNOCENCE. Edward Lachman’s cinematography, Carter Burwell’s music and Judy Becker’s production design all enrich the film, making this world feel at once familiar and completely new.
In all, CAROL is a powerful and engaging look at a same sex relationship in 1950s America, and the toll it takes on those involved due to attitudes at the time. Blanchett and Mara light up the screen; every touch is sensual and every glance speaks volumes. The production design is lavish and sumptuous, and Lachman’s cinematography is warm and beautiful. I think we may have found a serious contender for the Palme D’Or in CAROL.
Rating: 4/5
Review by Brogen Hayes