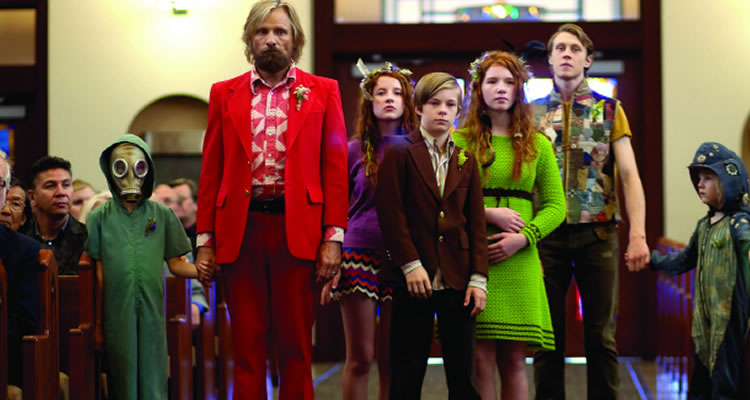 CAPTAIN FANTASTIC (USA/TBC/118mins)
Directed by Matt Ross. Starring Viggo Mortensen, Kathryn Hahn, Steve Zahn, Missi Pyle, Frank Langhella, George McKay.
THE PLOT: Ben (Viggo Mortensen) and his seven young children live completely removed from society, somewhere in an American forest. When the children’s mother commits suicide while away from her family, Ben is warned not to come to the funeral by the children’s grandfather (Frank Langhella). Ben refuses to take this lying down however, and packs the kids into their trusty bus – that they have named Steve – and head back to civilisation on a road trip that will change the way they live forever.
THE VERDICT: ‘Captain Fantastic’ is screening in the Un Certain Regard section of the Cannes Film Festival. Directed by Matt Ross, the film is a warm, funny and moving tale about how far one family can truly be removed from the capitalist society they so truly despise.
Viggo Mortensen leads the cast with a wonderful performance as Ben. Strong in his convictions, and love of Noam Chomsky, Ben is a loving father who is not afraid to challenge his children. Mortensen is at once loud and thoughtful in his role; determined to fight “the power”. But always trying to make his children’s lives better. Magnetic, charming and funny, as well as tenacious and kind, Mortensen easily leads this cast to greatness. George McKay plays Bo, the eldest of the children, and the one who is beginning to move away from the isolated life the family leads. McKay makes Bo earnest and sweet, and honest in a way that the people in the “real world” cannot understand. The rest of the children are played by Samantha Isler, Annalise Basso, Nicholas Hamilton, Shree Crooks, Charlie Shotwell and Trin Miller who are all sweet and warm in their sincere but smaller roles. The rest of the cast features Frank Langhella, Kathryn Hahn, Missi Pyle and Steve Zahn in lovely small turns.
The screenplay, written by director Matt Ross, is quirky and sweet, and never judges Ben for moving his family to a forest and fighting to keep them outside of the system. The dialogue carefully highlights the strengths and weaknesses of living such a secluded life, while also gently and kindly taking a look at the nature of grief and grieving; the ones being lashed out at rarely being the ones who deserve it. The film is a combination of a road movie, a coming of age tale and one about outsiders trying to find a way in, and this mix is woven together in a moving and delightful manner on screen.
As director, Matt Ross keeps the film moving at a steady but engaging pace; there is rarely a moment where the pacing dips, and when it does, it is something that works in favour of this slightly manic and weird family. The performances are sweet and engaging, and feel entirely honest and are often hilarious. The music choices are strong and the cinematography beautiful, rounding ‘Captain Fantastic’ our to a touching and engaging whole. Even though there are times when the film could easily have ended 20 or so minutes before it does, the extra scenes are worth the wait, and have a strong emotional payoff.
In all, ‘Captain Fantastic’ is weird, warm, hilarious and moving, with the entire cast working together in harmony to form a cosy and engaging film. Matt Ross proves himself a director worthy of commendation with this film about love, loss and trying to do what’s right for your family, even if it is not necessarily what is right for you.
RATING: 5/5
Review by Brogen Hayes