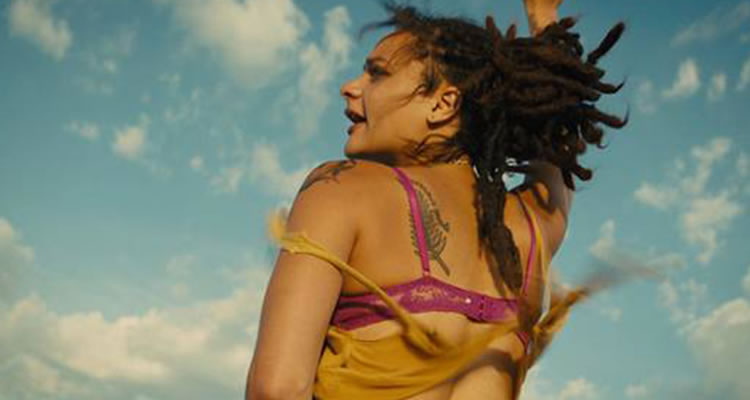 AMERICAN HONEY (UK|USA/TBC/162mins)
Directed by Andrea Arnold. Starring Shia LaBoeuf, Sasha Lane, Shia LaBeouf,
McCaul Lombardi, Arielle Holmes, Veronica Ezell
THE PLOT: When first we meet Star (Sasha Lane) she is dumpster diving for food, and hitching lifts with children that are obviously not her own. After she meets Jake (Shia La Boeuf) at a K Mart and he offers her a job selling magazines door to door, she leaves the kids with their parents, and sets off on a road trip across America with Jake and other disaffected and lost teens, led by the mysterious Krystal (Riley Keough).
THE VERDICT: Screening In Competition in Cannes, and taking its title from the song by Lady Antebellum, American Honey is both a cautionary the and wildly aspirational; even though this is perhaps not the message the film wants to convey.
In the lead role, Sasha Lane makes Star a charming enough character, and makes sure that her morals shine through as she questions the methods people use for selling magazines, and spends time in the film rescuing animals from uncomfortable situations. Lane is well able enough to carry the film, and works well with the other members of the cast. Shia La Boeuf plays Jake, the salesperson most favoured by Krystal, and who develops an infatuation with Star. La Boeuf’s performance as the morally bereft Jake is strong, and a good contrast to the well meaning and kind Star. Riley Keough makes Krystal ruthless and unlikeable, delivering many of her lines with a dripping malice. The rest of the cast features McCaul Lombardi and Arielle Holmes many of whom director Andrea Arnold found in shopping malls and the like; often holding auditions for the film in parking lots.
The screenplay, written by Andrea Arnold, follows these disaffected youths – many of whom will not be missed by anyone – as they journey through the American Mid West. Much of the film is spent with the characters as they drink, get high and sing along with rap in the back of cars, and although Star is the heart of the film and we are with her on this journey, we don’t learn much about her or any of the characters since the film seems more interested in capturing the cult-like life of these kids on the road, with a tumultuous romance thrown in for good measure.
As director, Andrea Arnold makes the kids likeable for the most part; it is clear they are having the time of their lives crossing the country with little responsibility, staying in motels and partying every night, but this means that the 2 hour 42 minute running time of the film feels drawn out, and the eventual ending unsatisfactory. There is a feel of Spring Breakers about the film; filled as it is with neon clothing, a charismatic leader and a drifting storyline, and this leaves the film feeling familiar and derivative, rather than a fresh statement on the state of youth in America today. The film could easily have been a companion piece to Ken Loach’s I, Daniel Blake, as the characters in both films find themselves falling through the cracks and on the fringes of society, but American Honey feels thin by comparison to the emotion of Ken Loach’s film, and the characters are too carefree to understand the economic tragedy they are in. The cinematography of the film is beautiful, with the Academy aspect ratio making much of the film look like an instagram video – the handheld feel of the camera only adds to this – and this beauty in desolation is perhaps one of the strongest aspects of the film.
In all, American Honey feels too familiar to be truly original, and with another film In Competition at Cannes about economic challenges, it pales in comparison. The characters are charming, however, and if you are looking for a two and a half hour instagram video on how beautiful the US can be, during which the characters change very little, then this is the film for you. The rest of us, however, may struggle to stay engaged.
RATING: 2/5
Review by Brogen Hayes