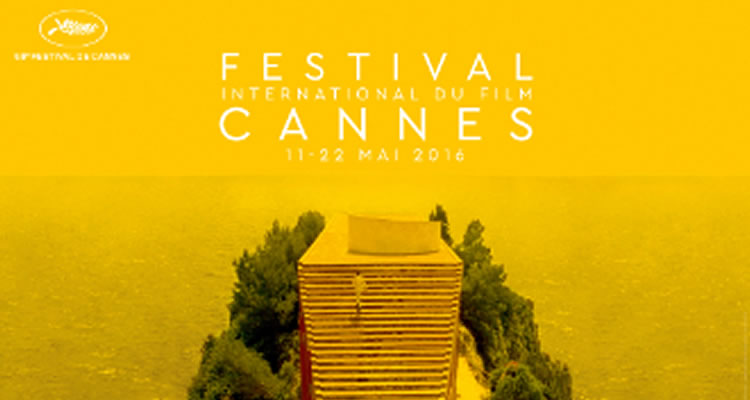 DAY 8
Another early start this morning, but we did not head down to the Palais for the screening of ‘The Unknown Girl’ by the Dardenne Brothers, instead we walked in the opposite direction; to the Theatre Croisette for a screening of Kim Nguyen’s ‘Two Lovers and a Bear’, screening in Director’s Fortnight.

Starring Dane DeHaan and ‘Orphan Black’’s Tatiana Maslany, ‘Two Lovers and a Bear’ is the story of a young couple very much in love, who live at the top of the world in a Canadian tundra. Both have run away from their past to hide in this barren place, but it is not long before they both realise they must return to the world they have left behind, in order to come to terms with their past. Oh, and one of them can converse with bears. Read our full review here.

After lunch, we headed to yet another rooftop for an interview we were very excited about – yes, even more than Robert DeNiro – ‘Orphan Black’’s Tatiana Maslany. Maslany was in town to talk about her new film ‘Two Lovers and a Bear’, but of course we also talked with her about her hit TV show, and just how beautiful the view over Cannes really is.

Another day, another rooftop. #cannes2016

The interview with Tatiana Maslany will be published on Movies.ie later in the year, so keep an eye out for it.

After a rather relaxed afternoon – and god knows we needed it – we headed to the Palais early for one of the most anticipated films of the festival; ‘It’s Only the End of the World’ by Cannes darling Xavier Dolan. The queue was one of the busiest we’ve seen this year – we were right to get there early – and even inside the Debussy screening room, seats were hotly contested. Sadly, Xavier Dolan’s latest did not live up to the hype, and was certainly not up to the young director’s usual standard. Based on the play “Juste fin de la Monde” by French playwright Gilles Paris, ‘It’s Only the End of the World’ follows Louis (Gaspard Ulliel) as he reutrns home to his family for the first time in 12 years. Louis has some news to tell his family, but his presence in the house stirs up old tensions, and it is not long before the entire gathering turns into chaos. Also starring Marion Cotillard, Vincent Cassel and Lea Seydoux, ‘It’s Only the End of the World’ is a film that significantly less than the sum of its parts; drowned as it is in bickering family members, and a booming and jarring soundtrack. ‘It’s Only the End of the World’ is not only filled with infuriating characters, but it is the first time that Xavier Dolan’s young age is screamingly evident on screen. Read our full review here.

DAY 9
Another early start this morning, and back to the Palais for the screening of Cristian Mungiu’s ‘Graduation’. Mungiu won the Palme D’Or at Cannes in 2007 for his film ‘4 Months, 3 Weeks and 2 Days’ and his film ‘Beyond the Hills’ was incredibly well received at the festival in 2012. The film is the story of honest and respected Romanian doctor Romeo (Adrian Titieni) who turns toward the corrupt when his daughter is assaulted just before her final exams, on which a place in a prestigious college rests. The film has a strong message about corruption in Romania, but loses momentum very quickly through some slow pacing and questions left unanswered. Read our full review here.

After the screening of ‘Graduation’, and sure that the god of Iggy Pop would smile on us, we joined the queue inside the Palais for Jim Jarmusch’s second film at the festival; ‘Gimme Danger’. Fate was not on our side however, as we arrived too late to get into the small screening room, and were waved away from the door. We sadly took up residence in the pressroom overlooking the Croisette, before heading over to the Olympia cinema for a screening of Mel Gibson’s film screening out of competition; ‘Blood Father’.

As we unglamorously stood on the stairs of the cinema, waiting for the doors to be opened, we managed to grab Nick Kroll – who was in Cannes for Jeff Nichol’s film ‘Loving’ – to tell him how much we enjoyed his film, as well as his hilarious turns in ‘The League’ and ‘Parks and Recreation’. Kroll very sweet and happy to hear our effulgent praise, and we went back to queuing with a smile on our face!

‘Blood Father’ is screening at the Midnight Screenings section at the Cannes Film Festival this year, and tells the story of ex-con John Link (Mel Gibson). Link’s daughter has been missing for several years, and when she contacts him out of the blue, Link finds himself in serious violation of his parole as he fights to protect his daughter from criminals and drug dealers who are our to kill her. Our full review is still to come on Movies.ie.

After a walk in the sunny sunshine – we hear it’s raining back home – it was back out early to queue for the new Nicolas Winding Refn film ‘The Neon Demon’. After so many people were turned away from ‘It’s Only the End of the World’, we were not taking any chances with this one, as ‘The Neon Demon’ is another highly anticipated film at the festival. The film stars Elle Fanning as Jesse, a beautiful young girl who moves to LA with the dream of being a famous model – even going so far as to state “I’m pretty, and I can make money off pretty” – but when Jesse is fawned over by agents, photographers and designers, it is not long before she attracts the violent ire of other, older models.

Cannes audiences are known for being vociferous with their opinions at screenings, and amidst then boo-ing and scattered applause after the screening of ‘The Neon Demon’, audience members were even going so far as to shout abuse at the screen, in language that we couldn’t possibly repeat here. We are on the side of the boo-ers with this one however; we found ‘The Neon Demon’ to be vapid, thin and misogynistic; as though director Nicolas Winding Refn opened a fashion magazine and decided to make a film about it. Read our full review here.

After the disappointment of ‘The Neon Demon’, it was time for us to retire to the quieter end of the Croisette for a decent meal – what’s seldom is wonderful – and an early night – even more seldom – in preparation for a very exciting day tomorrow. Keep an eye on Movies.ie for more…