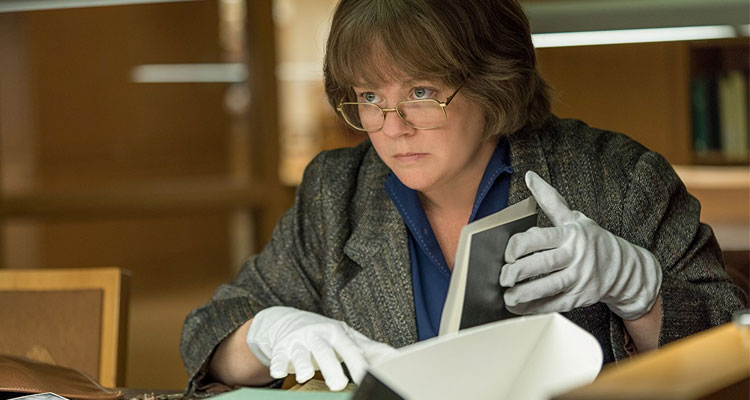 Can You Ever Forgive Me?

In short: The write stuff

The Plot: New York, 1991. Writer Lee Israel (Melissa McCarthy) has had some hits as a biographer, but her own life is not exactly worth writing about. She’s fallen out of fashion in the literary world, her cat isn’t feeling well, her rent is well overdue and the bills are mounting up. Her latest work, a biography of a vaudeville queen, is met with a frosty reception from her exasperated agent Marjorie (Jane Curtin). In desperation, Lee hits upon the idea of creating forged letters and memos from celebrated and preferably dead writers like Dorothy Parker and Noel Coward. It’s a lucrative business for collectors, looking for authentic memorabilia. She confides in her dodgy scheme to her flamboyant and frequently sozzled friend Jack (Richard E. Grant), who seems to be her only friend. How long can she pull off this criminal endeavour?

The Verdict: While primarily known as a comedic actor, Melissa McCarthy also does serious acting from time to time. The kind that gets attention from awards bodies, hence her recent Golden Globe and BAFTA nominations for her new film, Can You Ever Forgive Me? Like Jim Carrey before her, she’s a darn fine actor when not pratfalling or playing the comedic sidekick and is instead given something meatier to chew on. Can You Ever Forgive Me? sees McCarthy take on the role of the real-life Lee Israel, a sad-sack fiftysomething biographer whose life didn’t work out the way she hoped for. It’s not that she has writer’s block, it’s that the ink well is drying up and the creative juices aren’t flowing as much as they used to. That’s where we find her at the start of the film and through much of what follows.

The script, by Nicole Holofcener and Jeff Whitty, is essentially a two-hander between Lee and Jack, with satellite characters stopping by to offer their own perspective on Lee’s failure to make that all-important comeback. That warm interplay and verbal jousting between Lee and Jack is at the heart of the film, made amiable by equally engaging and winning performances from McCarthy and Grant. Grant has remarked that the chemistry between them was immediately there and it shows. They spark off each other brilliantly, with McCarthy essaying the sad-sack has-been but still keeping her sympathetic. She’s balanced out by the more positive and direct Grant, who channels some of that drunken Withnail vibe to keep Lee in check. Well, mostly. Jack gets in on the scam to amusing effect later on.

Following on from her feature debut The Diary Of A Teenage Girl, which also introduced us to the remarkable Bel Powley, Marielle Heller’s direction is quiet and unassuming. It’s less distinctive than her debut though, with a slightly muddled voice. She simply lets her actors get on with the job, which is fine for what it is. If you’re looking for a deeper meaning as to why Lee did what she did, then it’s not particularly apparent. Heller takes more of a surface skim of her characters, emphasising their quirks rather than their qualities. It has the unfortunate effect of coming across as too light and not fully playing into McCarthy and Grant’s deeper dramatic reserves. There’s a hint of that dramatic reserve in the terrific closing scene, but more throughout would be welcome. Can You Ever Forgive Me? has the write stuff though and makes for agreeable company with these two not-so-mastermind forgers. More like this please, Melissa McCarthy.