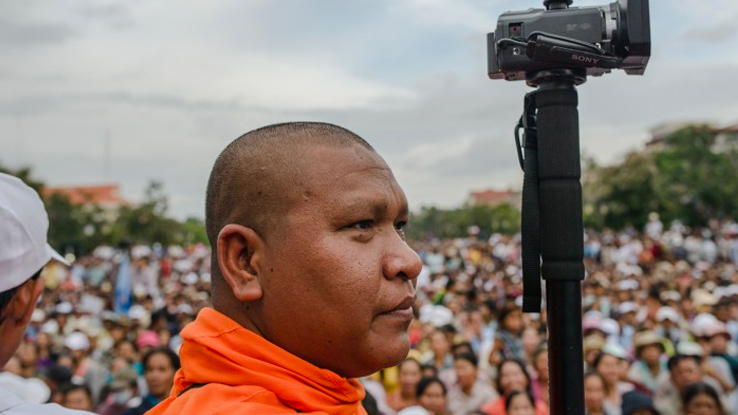 Interview with Irish film-maker Chris Kelly for his powerful documentary now showing in select cinemas. It’s an unapologetically subjective portrait of his time in Cambodia, of the people who shared their lives with him and of the shifting landscapes, both physical and emotional.

Writer, Director, Producer, Editor & Cinematographer. Is it fair to say, Chris, this is a passion project for yourself?

Yeah, definitely I’ve been working on it for 25% of the time I’ve been alive it’s been nine years since we started it and ten years when it’s finished in cinemas.

What was it about the Venerable Luon Sovath, Toul Srey Pou, and Tep Vanny that made you decide to have them as the focal point of the film?
I had gone to Cambodia in 2009 to start filming and to find subjects to document the idea being that we would spend about three months in the country filming and that would be it but when I met the Venerable and the people it became quite clear that it would be a much more interesting documentary if we stayed and documented things as they unfolded in real time rather than recount their experiences. That’s why the film has an immediacy about it because you’re witnessing everything as it happens. Also, the Venerable was such a tremendous filmmaker himself so I thought as a filmmaker it would be interesting to follow someone like him and be able to reflect on the wider political landscape. I had no idea that things were going to go the way they went in the Venerables cases were quite small they were well known the Boeung Kak case was going on in Cambodia because it was the largest forced eviction and also because the World Bank was connected to it but I had no idea six years down the line we were going to still be filming and that there was going to be such huge political upheaval so that was something that just happened while we were filming.

You talked about working with the Venerable and I’m wondering what was it like for him as he has such a unique journey. What was it like talking to him as this situation unfolded?
In the beginning, it was really interesting because when we first went to the province to meet with him he was directing me on what to shoot and everything and it took awhile to sort everything and for him to let go and let me do what I was going to do. But you know some of the key scenes were shot from him using a secret camera for example when he’s arrested and of course, the conflict at the end of the film was also shot by him so we really wanted to give him a voice and let his filmmaking aesthetic and his
filmmaking technique comes through. He’s actually credited as a co-cinematographer in the film.

What was it like interacting with all the people of the village during your time there? I’ve seen the film and watching that kind of devastation that was going on around them how was that for yourself?
I was very conscious of being a foreigner and I never wanted to make the definitive history of Cambodian forced evictions or the Cambodian political landscape. I don’t think there’s any definite version of any one story there are always alternative views on things and alternative perspectives and so I very consciously made a film that’s a subjective portrait of my time in Cambodia and the people that have left. It’s a very rewarding experience in a way selfishly for me to do that because the people are so generous and so brave and so giving with their time and so willing to allow into these very private and painful moments in their lives. As you can see people are having their homes destroyed and are being thrown in jail and their being threatened and to be given that kind of access is a humbling experience. They did say to me though that having me there at times was a source of inspiration because somebody else cared about what they were going through and was there willing to spend six years living with them in the country even though I was never able to help them financially or them with aid even.

There are some truly harrowing scenes in A Cambodian Spring, one particular scene comes to mind where we see a bullet being extracted from a person. Were there any moments you couldn’t film due to the intense nature of the events around you?
No, I never had any problems as a foreigner I was always allowed do my work unimpeded and I never had any restrictions or I never had any kind of censorship or I never had any kind of aggression toward me from the authorities. Seeing these harrowing things was, of course, difficult I mean someone was shot dead no more than two feet from me when we were filming the protests and that very easily could have been me that was shot because the police and the army were just indiscriminately firing live rounds into the crowd so there was a danger in that sense but that’s just the nature of urban conflict and unrest.

I’ve done a hostile training course for this type of scenario so I’m quite prepared in that sense for it. Also by filming it detaches you from the reality of what your filming so it’s a kind of coping mechanism too. It’s easier to experience these events through the lens of a camera than to be totally present and I think you probably notice there’s a lot of people filming everything happening which is a coping mechanism for them also. They’re documenting everything all the time it’s rare for an event in Cambodia to happen and not be filmed by multiple people. Life happens under the scrutiny of multiple camera lenses it’s a phenomena that occurs in lots of different places around the world and maybe there’s a universal reason for it I’m not sure. But it certainly helped me deal with what was going on and I felt compelled to do as good a job as possible even though there are stressful situations.

As a documentarian and an editor how much of A Cambodian Spring is on the cutting room floor?
Well there’s a lot on the cutting room floor actually there’s a whole other story with another character that we filmed with an extremely brave woman one of the bravest women I’ve ever met and her story was in a separate location and it just didn’t work with the other stories because the other stories connect throughout the narrative. So hers, unfortunately, couldn’t be fit into the final edit but hopefully, we can salvage enough material to have her story when the DVD and Blu-ray are released. Also, we had to
factor in that it’s not too short or too long and it’s long as a documentary but we moved at a decent enough pace to balance that and we’ve had no negative feedback from audiences so far. In terms of what we shot we didn’t actually have that much because for six years we had approximately two hundred and eighty hours of footage thereabouts. We just made sure not to film unnecessarily but what is funny is how we found scenes while editing and that’s how documentaries are made in the editing process.

Can you discuss your upcoming projects? Including your animated feature about slavery in the Thai fishing industry as well as a VR game about slavery and migration?
Sure, so they’re both connected the VR game is a spin-off of the animated feature. It’s an animated feature drama based on the years of investigative work that I did for The Guardian about slavery in the Thai fishing industry so I broke some stories for The Guardian in either 2013 or 2014 and it was a huge international story. We connected slavery between prawns being sold in Tescos, Costco, and Walmart, Lidl, and Aldi. It was a huge story and the British government amended a huge slavery bill and it was discussed in parliament and there was a whole global task force set up because of it and the whole Thai seafood industry was supposed to be revamped in the wake of it and many newspapers followed afterward and did similar stories. So what I did was take all the testimonies of escaped slaves and all the undercover footage of human traffickers over the years and we’re fictionalising it into a script. We’re still in the development stages of that so that’s all I can say but it’ll be an Irish, Northern Irish co-production with other countries as yet to be confirmed.

Finally, Chris what’s it like now having finished this decade-long journey for A Cambodian Spring?
It’ kind of terrifying and exhilarating at the same time I just really hope that the audience people get to see it and hopefully enjoy it. It’s been a real labour of love and a real passion project that we’ve been working tirelessly on and there have been so many people who’ve believed in this film, who’ve worked for next to nothing or even nothing at all to get it finished like Zanzibar Films in Ireland and lots of other production companies around the world. It’s great to be able to get it out there and let people see it and hopefully enjoy it.

A CAMBODIAN SPRING is at cinemas from May 4th