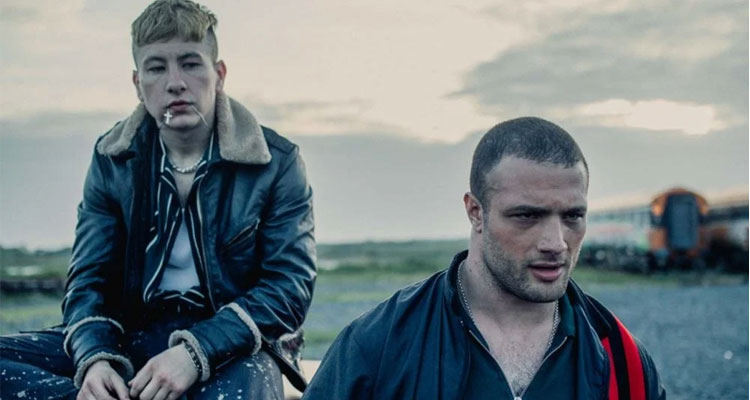 In short: Packs a punch

The Plot: Rural Ireland. Douglas ‘Arm’ Armstrong (Cosmo Jarvis) works as an enforcer for the drug-dealing Devers family. He’s closest to Dympna (Barry Keoghan), who uses Arm to flex his muscles when required. Arm is also trying to maintain contact with his former partner Ursula (Niamh Algar) and their young son. When a situation develops in the Devers family, intimidating senior member Paudi (Ned Dennehy) wants the offender to disappear – permanently. Dympna tasks Arm to finish the job. Arm develops conflicting loyalties towards his real family and his adopted one, as he wrestles with his conscience to kill…

The Verdict: First features can be interesting experiments in burgeoning creativity and talent. A new director can hit the ground running with a great script and be able to co-ordinate his actors and setting with the confidence of someone more seasoned. It could also be an air of confidence and optimism rather than cynicism. It worked for Richard Kelly and Donnie Darko. It appears to have mostly worked for British director Nick Rowland and his Irish-set crime drama Calm With Horses. It’s evident that he’s been able to take a potentially mawkish scenario – an enforcer with a drug habit and a troubled kid has a crisis of conscience – and develops it into something deeper and more character-driven.

The involving script by Joseph Murtagh establishes Arm as a former boxer who now boxes those who draw the attention of the crime family he works for. He’s under pressure as much as his buddy Dympna, himself a jumped-up thug who hasn’t got what it takes to look a man in the eyes and end his life. Living up to the family name has its risks. It’s important here that Murtagh gets Arm on the audience’s side early on. To humanise him and make him more like a trapped animal caught between the loving family he wants and the family that he’s ended up with that requires absolute loyalty. It makes for a multi-layered story about familial duty.

Singer/actor Cosmo Jarvis, who made an impression along with Florence Pugh in Lady Macbeth, has the physicality required for the role. His hulking frame masks Arm’s inner insecurities, allowing him to commit equal acts of brutality and kindness to strangers. It’s a terrific performance, a man at war with himself reminiscent of Matthias Schoenaerts recent performance in The Mustang. Apart from some eccentric acting from Ned Dennehy as the unhinged boss of the Devers family, Jarvis is surrounded by an equally impressive cast including rising star Niamh Algar. Good things should come from this film for both of them.

Just when it looks like the story might be heading towards a signposted western-style escape and showdown, Rowland subverts audience expectations. This shows a measure of thought on the part of Rowland and Murtagh to not tread familiar territory, but to suggest something more Biblical amid the misty mountains and unsympathetic landscapes. Calm With Horses is an assured debut that, like its lead character, packs a punch.