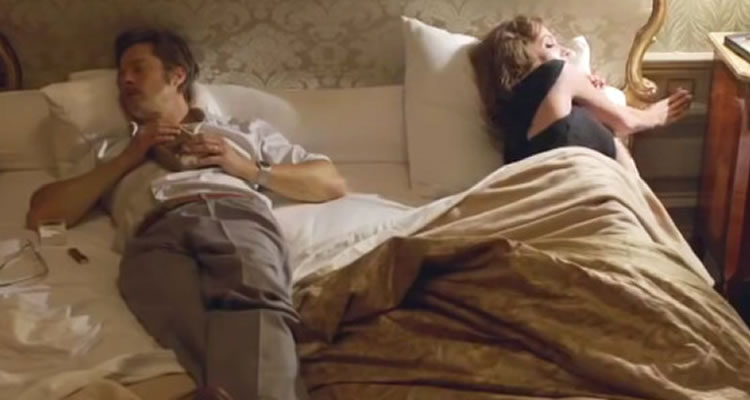 BY THE SEA (USA|France/15A/12mins)
Directed by Angelina Jolie Pitt. Starring Angelina Jolie Pitt, Brad Pitt, Melanie Laurent, Melvil Poupaud, Niels Arestrup
THE PLOT: Vanessa (Angelina Jolie Pitt) and her husband of 14 years Roland (Brad Pitt) arrive in a small French seaside town. Roland, a writer, is searching for inspiration, but mostly spends his days drinking, Vanessa spends her time cooped up in their hotel and popping pills. When a young couple takes the room next door, and Vanessa finds a way to spy on them, the older couple suddenly find a way to spend time together, and a way to finally talk about their problems.
THE VERDICT: First things first; ‘By the Sea’ can be boiled down to just this; two hours of horrible people doing horrible things to one another. It is not that Angelina Jolie Pitt is a bad director per se – last year’s Unforgiven had issues, but as a solid effort – but ‘By the Sea’ is a slow moving, underwritten domestic strife drama, in which the characters learn very little.
In an interview with The Hollywood Reporter, Angelina Jolie Pitt stated that the idea for ‘By the Sea’ came from the grief of her mother dying, and the love she had for movies from the 1970s. This is a noble gesture on the director’s part, but her screenplay for the film is not one that lives up to this noble inspiration. Vanessa is drawn as caustic and nasty, shunning even friendly chatter from those who encounter her; Roland is little more than an unhappy alcoholic and the rest of the characters are two dimensional and thin. Melanie Laurent tries her best with what she is given, as does Melvil Poupaud as Francois, but the standout performance is from Niels Arestrup as barkeeper Michel, who brings genuine emotion and wisdom to his character. Jolie Pitt and Pitt, for their parts, struggle to make their vile and cruel characters interesting and, for the most part, fail.
As director, Jolie Pitt brings no urgency to the film, allowing it to crawl through its 2 hour running time. Much time is spent watching characters look at one another and, when the big change comes with the discovery that Roland and Vanessa can spuy on a young couple having sex, the film turns from dull to creepy and dull. There seems to be no reason for these characters to do what they do – spying certainly doesn’t help their sex life or their emotional relationship with one another, in fact, it seems to make it even worse. Nudity abounds in the film, for no apparent reason, and the characters seem to learn nothing from their cruelty to one another, meaning the story has no resolution.
In all, ‘By the Sea’ is a two-hour journey through the lives of two people who hate each other, and are willing to be nasty to each other to entertain themselves. The trouble is, that this is not all that entertaining to watch. The cast struggle to make their characters relatable and the screenplay makes a big song and dance about revealing secrets; all of which the audience will see coming a mile off. For all its cinematic beauty, ‘By the Sea’ is as languid as its characters, and never truly goes anywhere.
RATING: 1/5
Review by Brogen Hayes