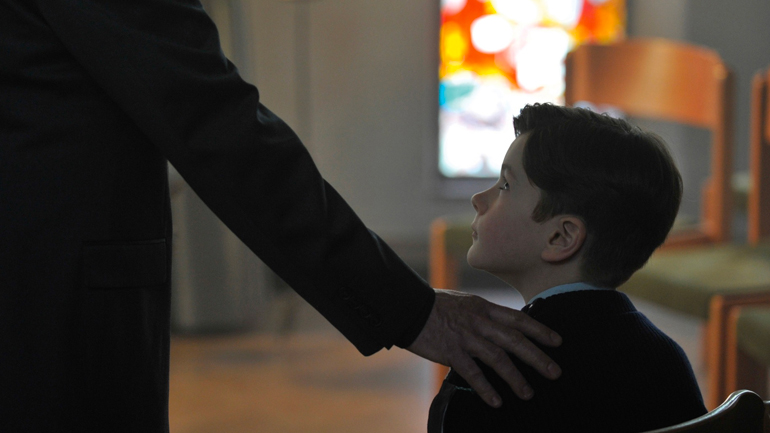 BY THE GRACE OF GOD – Interview with director François Ozon

Opening on October 25th, Francois Ozon’s gripping true-life drama tells the story of three men who come together to dismantle the code of silence around historic abuse cases within the Catholic Church. Based on events from the 2019 conviction of Cardinal Philippe Barbarin of Lyon for concealing the conduct of Father Bernard Preynat, BY THE GRACE OF GOD is as an urgent portrait of resistance.

What inspired you to make this kind of story?
I didn’t really create. I told a story which really happened it comes from real facts. It was not my first choice. My first choice was to make a film about male fragility and to show men expressing their sensitivity and so by chance I discovered the testimonies of these victims of priests and I was touched so I decided to meet them and they told me their stories and I was moved and I decided to tell their fight and I began to find the structure to tell their stories.

The three characters, Alexandre, Emmanuel, and François. Are they real people or are they an amalgamation of people so you can protect the survivors?
They are the people. I just changed their second name. I think they trusted me because they saw the film Spotlight which was very important to them. The told me telling me their private problems will hopefully help them.

There’s a particular scene where Alexandre’s mother says he was always good at stirring up shit. Were you surprised at the brutal nature of the vernacular of some of the families towards the survivors?
Yes, it was quite shocking but it was very real and all the reactions from each family were very different. It is shocking because Lyon is a very conservative catholic city and you realise sometimes that the family did not support their own children because they think the church is more important but I think things are changing now. It comes from another generation. The new generation is very different, you can see that in the film when Alexandre is able to tell his own children what happened to him. It was impossible to speak to his parents when he was young so he decided to wait.

Sadly this is not a new film, a new story to tell on this subject as you spoke earlier on Spotlight. So to make sure it didn’t get lost what kind of challenges did you face to ensure the story of these survivors was seen?
I think my film is complimentary to Spotlight because Spotlight is about society and my film is squarely on the victims and it shows that the damage on an abuse victim is a ticking time bomb for a family. Everybody can be damaged by such a thing, the rape of a child can destroy all families and it was important to show that because usually, you don’t see that in movies so for me that is why I made such a big investigation during the writing of the script. To meet the children, the brothers, sisters, to have all these points of view and to use all of it for the writing of the script.

You have Melvil Poupaud as Alexandre, Denis Ménochet as François, and Swann Arlaud as Emmanuel. How important was it for you to get the casting of these people right?
It was easy. We didn’t have a big budget but actors wanted to be in this film because the subject matter touched them, it moved them. When you are abused as a child have a kind of dislocation. You are too young to understand what happened to you and so you decide to go and live your life and to play again as if nothing happened and when you become an adult the trauma comes back and you discover what happened and that you were raped.

For the actors, they had an arc of dislocation too because they are playing someone else so there is a kind of link I think with the actors. They are a separate like how the child victim is a separate person to the adult victim.

You also wrote the film, François. What kind of challenges did you face when trying to properly convey the trauma of the lives of these people?
It was a big responsibility for me but I like the people I met. I admire them so I wanted to show them as an American hero in a movie. So when you discover all the stories you are so shocked by how the priests never denied what they did. That these priests were still with children all the time so it was so shocking so you just want to tell their story and their fight because it’s so unfair. It’s incomprehensible. I wouldn’t say it’s a political movie but I wanted to show how it’s shocking and how the church can protect these kinds of people. In the end, it was just to be a citizen and tell this story.

On the technical aspect of the film, I’m not sure if you did this on purpose but it’s built almost like a four-act play. You introduce Alexandre, then François, then Emmanuel, and then they come together in the fourth act. Was that a deliberate choice on your part?
Yes of course. Alexandre was alone, he didn’t know most of this existed so he began the fight alone. when after two years that the church wouldn’t help you think the door is closed on him and his story but then an investigation began and it found François and so François began his story and then new victims arrived so it was quite new for me to create this kind of structure because it’s unusual to lose your lead character after forty-five minutes except maybe in a Hitchcock film like Psycho. It was a big challenge because I didn’t have that originally as my plan for the film. In a sense it was exciting, my producers were a little bit nervous about this structure but in the end, it was very exciting for me.

You’ve become so close to the film now and what’s been going on around it, how did you feel when it was announced that the priest in question in this film was defrocked by the church? Does that show you there is still a lot of power in film as well as its influence?
I think the film was very helpful for the victims, before the release of the film all the churches in France were against it and now the film is out in France and it was a huge success. I think the church and its hierarchy now realise how much the victims reach as come. It was a big success for us when he was defrocked because the victims were waiting for so long. Many Catholics came to see the film and they were shocked and moved by it and they wanted things changed by the hierarchy.