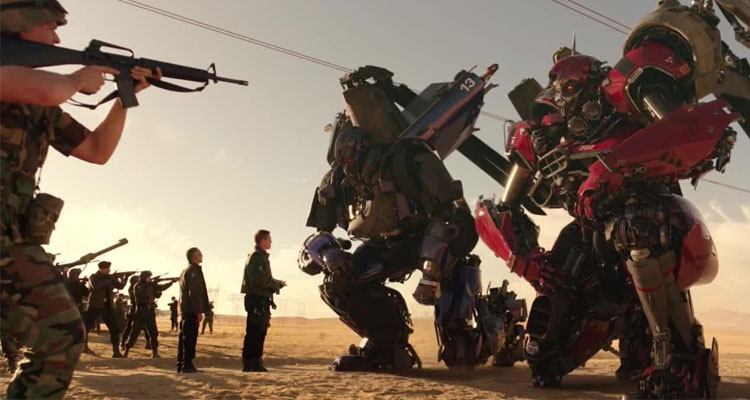 In short: Buzzes with humour

The Plot: Cybertron is caught in a deadly war between Autobots and Decepticons. Optimus Prime (Peter Cullen) retreats and dispatches his trusted right-hand autobot Bumblebee to Earth, to protect humans in the event of an advance attack by Decepticons. Taking the form of a beat-up yellow Volkswagen Beetle, Bumblebee comes into the hands of teenager Charlie (Hailee Steinfeld). Now that she’s 18 and desperate to escape the clutches of her parents, she sees the car as a pathway to a new life of adventure. She gets more than she bargained for when Bumblebee reveals his true identity, but they bond and become protective of each other. They’ll need to stick together, as they’re being tracked by Agent Burns (John Cena) and Decepticons Shatter (Angela Bassett) and Dropkick (Justin Theroux)…

The Verdict: After 11 years and 5 films of Bayhem that gradually decreased in quality, Transformers is not only going back-to-basics but also going retro. This can only be a good thing for a franchise that has become bloated and exhausting to watch. Bumblebee is a smaller, more compact film that comes in under 2 hours and places as much emphasis on the story as on the visual effects. In essence, it recalls the 2007 original with a twist – that of a boy and his first car this time inverted to a girl and her first car. The connecting tissue is of course Bumblebee himself. However, the similarities end there. With the film set during the classic Transformers era of the 1980s (specifically 1987), it taps into the Amblin vibe of that time period. With Steven Spielberg as an executive producer, Bumblebee tips its swinging door at E.T. The Extra Terrestrial and a dash of Short Circuit too.

Director Travis Knight knows how to keep a good story grounded amid all the eye-popping visual effects. Having worked with the ace stop-motion animators in Laika and made his debut with the stunning Kubo And The Two Strings, Knight branches out here for his first live action film. It’s a successful transition, as he brings out the warmth in the characters from Christina Hodson’s script. Charlie is your average girl-next-door just yearning to hit the road and start her newfound adult freedom. She’s mourning the loss of her father and it’s not a stretch to imagine that Bumblebee is as much a surrogate father to her as a friend. A clumsy one at that, as Knight riffs on a scene from E.T. in which Bumblebee amusingly struggles to understand living in a human house.

There’s a lovely interplay between Charlie and the vocally-silent Bumblebee, well-played by the amiable Steinfeld. That connection between teenager and autobot is more pronounced and credible here than in the 2007 film. There’s also less nonsense going on. There’s no camera leering at Megan Fox or the fetishising of cars as sleek, desirable machines. Instead, Knight goes for a geeky love interest who isn’t there to save the day and the car tech is pleasingly retro. For a franchise that has far too often been accused of being aimed solely at boys and middle-aged men who grew up with the toys in the 1980s, this is a refreshing change of pace even if Michael Bay is still a producer. At last we have a Transformers film that has a strong female lead and therefore across-the-board appeal to everyone.

That’s what sets Bumblebee apart from its predecessors, but it’s not a soft reboot. It’s a prequel of sorts to the 2007 film, has plenty of explosive action and a knowing sense of humour. It fits the mold of a Transformers film, but leaves a different imprint. By going smaller, the story and the actors are brought more to the fore so that it becomes a relatable character piece about growing up and taking responsibility. Bumblebee himself is a more interesting character than before – not bad for a bunch of shifting pixels. Bumblebee buzzes with warmth and humour from the get-go and is all the better for it. Even more surprising is just how enjoyable and entertaining it is too. To borrow the classic toy slogan, it’s more than meets the eye.