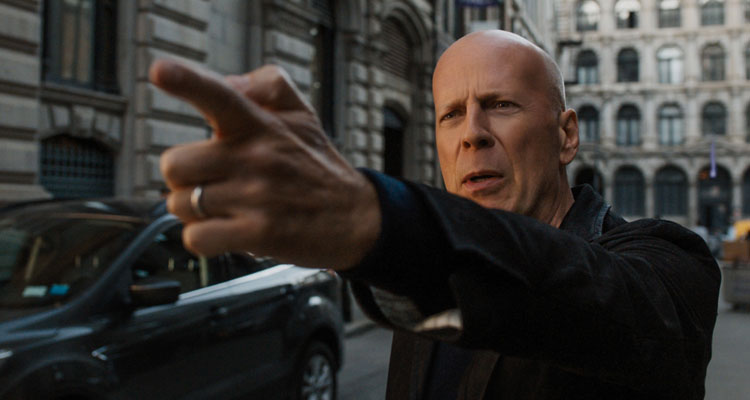 Courtesy of Yahoo! Movies, we have our first look at Bruce Willis in ‘Death Wish,’ the Eli Roth-directed remake of the vigilante classic starring Charles Bronson.

Based on the novel by Brian Garfield, DEATH WISH stars Willis as Paul Kersey, a mild-mannered surgeon who turns hard with a vengeance after his family is torn apart by a violent home invasion. Roth, who lists ‘Unforgiven,’ ‘Eastern Promises,’ ‘Taken,’ and ‘Man on Fire’ as his inspiration for the remake, believes ‘Death Wish’ will be a return to form for Willis.

“We wanted to bring back that great, classic Bruce Willis we all know and love and just do a fun, badass update of a revered classic,” Roth revealed to Yahoo! “I wanted to bring Bruce back to that ‘Fifth Element,’ ‘Unbreakable,’ ‘Die Hard’ glory and have him craft another iconic performance, and I really think he did it. I mean I really think this can be his ‘Taken.’

“The fun is watching him go crazy and watching someone slowly move the moral goal post. What’s interesting about ‘Death Wish’ is it’s not a CIA guy who’s coming out of retirement, you know, he’s not John Wick, he’s not a professional assassin. He’s a normal guy, he’s a surgeon, he’s a dad, he’s never picked up a gun in his life. . And with each kill as he gets closer to finding the people that did this to his family, he gains a new skill. He gets better and better and better. So by the end of the film he’s really much closer to John McClane… The very things that make him a good surgeon are what eventually make him a great killer.””