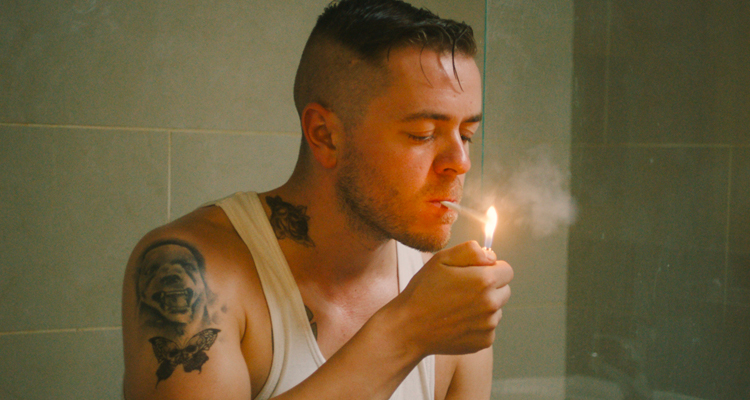 The Plot: Former convict Joe (Graham Earley) gets out of prison. Not quite reformed, he’s soon back in trouble with his bullish mate Wallace (John Connors). Meanwhile, his very different brother Dave (Tristan Heanue) is a Garda who is trying to live up to the policing legacy of his revered father. When Joe engages in a botched credit union robbery with Wallace, lines both professional and personal are crossed when Dave happens to be there and does his duty in protecting employee Amia (Gemma-Leah Devereux). The shared experience of that stressful encounter rubs off on them and they begin an affair. However, with Joe on the run with the stolen money, Wallace wants it back at whatever cost…

The Verdict: Paddy Slattery has been paying attention to his genre filmmaking. Having worked on several short films, he makes his feature directorial debut with Broken Law. It’s a vibrant slice of Dublin crime life, but thankfully not in the kind of way that can often trap the Irish crime drama into following a pre-ordained predictable path. The idea for the film had been knocking around in Slattery’s head since 2009 and at one stage was a very different film. Over the years since, he boiled his microbudget crowd-funded film down to the basics and focused the story on the contrasting lives and moralities of two brothers. One of them is a hardened criminal with a habit of getting into trouble, the other a hardened straight-as-an-arrow Garda who has to choose between duty to his profession and / or loyalty to his family.

Slattery has said that he saw the main theme of the film as a crisis of identity, when the heroes we look up to are pulled out from under us. Dave finds out some hard truths about his father’s legacy, which brings into question his own role in enforcing the law – broken or otherwise. Joe must face up to the consequence of his actions and how they affect innocent bystanders. Slattery adds further flavour by introducing the forthright Amia, who has her own troubles to deal with and must make a life-changing choice following the trauma of the robbery. How these three distinct story strands intersect and then hit off each other is part of the film’s ingenuity. Slattery’s smartly-observed script layers on moral complexity and inner conflict as things come to a head towards the end. It makes for tense and engaging viewing throughout, wondering which way the story might twist or turn next.

If the film has a slight air of familiarity to it, it might be due to crossover similarities to Mark O’Connor’s 2017 feature ‘Cardboard Gangsters’ – which also featured the four lead actors in this film. Given its authentic Dublin setting, good use of location work around the city and clearly defined character motivations, it tips its hat to O’Connor’s colourful depictions of city life but strikes out on its involving storyline. Slattery is a good director of actors, getting the right tone of performance out of them to suggest that the law can be bent as well as be broken. While there are good performances all round, there is the sense that Amia’s character is just a bit underwritten in contrast to the male characters.

Amia’s burgeoning relationship with Dave isn’t entirely obvious and comes unexpectedly. Unless we’re going down that Speed route of relationships based on intense experiences never working, but that doesn’t seem to be Slattery’s intention. She needed more agency and that spikiness we saw early on to round her off as an independent character caught in the crossfire. Devereux does good work though in keeping the character mostly on point. Within time, one can imagine Slattery fleshing out his female characters in subsequent films. While it is a little rough around the edges, Broken Law draws to a satisfying conclusion and shows promising potential for Slattery as a new voice in filmmaking. As the first Irish film back in cinemas since the acclaimed ‘Calm With Horses’ release was so cruelly cut short, ‘Broken Law’ once again proves that homegrown filmmaking is in good health this year.