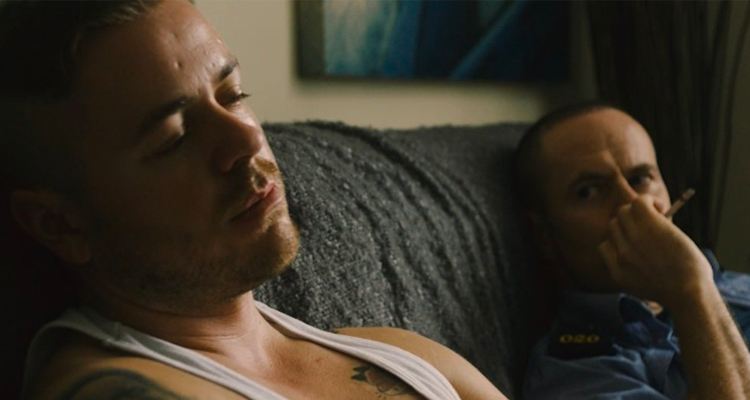 Opening in Irish cinemas on July 31st, BROKEN LAW is one of the most anticipated new releases of the summer. Written and directed by Paddy Slattery, the movie tells the story of two estranged brothers on opposite sides of the law. Dave Connolly is a respected member of the Garda Síochána but his loyalty to the force gets tested by his ex-convict brother Joe following a botched robbery. Suddenly Dave finds himself embroiled in a cover-up that leads to a secret relationship with Amia, an unhappily married woman who also happens to be the victim of his brother’s latest crime.

‘Broken Law’ was a long time in the works. Can you tell me how it came about?
I wrote the first draft of this in 2009, would you believe? But I shelved it. I had started on my journey in filmmaking right at the deep end, writing feature-length screenplays. When I wrote the first draft of this one, I decided to start making short films to learn the trade to get good at writing and good at directing. I wanted to build a network of people who would be able to help me make a feature at some point down the line. So, that was the goal as far back as 2008, 2009. That was the genesis of it.  I started with the script and then I went back and learned how to make films. Eventually, I dared to say, ‘all right, I think I’m ready to make a feature film’. That’s where we began going down the road of trying to go to development with producers and financiers. I went through maybe two previous stages of development with different production companies. And unfortunately, well, fortunately in the long run, but at that time, we got so far and we would hit a wall with finance and it looked like we couldn’t find the right fit. I guess the defining moment was when Simon Doyle, my co-producer on this, decided we would produce it together and start from scratch and redevelop the script to a budget that we could realistically achieve. Simon and I decided to make it ourselves, then the ball started to get moving.

When you went back  to redevelop the script did it change much from what it was to what we now see on screen?
It has changed dramatically! 10 years ago, I was very much a fan of Tarantino and Scorsese and I saw all of those influences in the first draft. It was overtly dialogue-driven with outlandish, stereotypical sort of crime drama characters. 10 years later, when we decided to make a film on an X amount of budget, I started to look at the world and the environment around us and realize that the characters on the original script were more caricatures of a different kind of time and place. I decided to make it more human, make it more real and relatable. So although we are selling this film as a crime thriller, it’s still very much bedded in real people and real circumstances in today’s world. When I read back the original script I cringe, but at the same time, I’m glad to see that I went through an arc in the writing process.

I believe you did some crowdfunding. Did you have difficulty getting funding?
We originally applied to Screen Ireland, then the Irish Film Board, rightfully they turned us down. When you apply, you think it’s the best thing, but in hindsight I realize it wasn’t ready and I wasn’t ready.  I guess I was kind of pigheaded in a way that I just said, right, you want to do it then we do it ourselves.  I raised money for short films in the past by crowdfunding and did it successfully. I was confident in going into that realm. To be honest, I knew I was never going to realistically raise our budget target. At that time it was 150,000 which in terms of feature filmmaking, it’s a very, very small budget, but I knew that as a first time director you’ve got some licence to beg and borrow. You rely on support and talent, that they invest their time in the hope that you get better funded on the next one. So we knew we had that card up our sleeve. So the crowdfunding was only a stepping stone towards getting more substantial money. We knew that if we raised X amount on crowdfunding, that it would at least open the door for us into proper meetings with private investors. And that’s what it did. I think we raised about 46,000 or something like that online. Then we could confidently say to private financers look, this is what we can put up. I can put in even some of my own money, I can match whatever somebody else puts in, and that’s the way we did it.

On the humour side of things, one of the things I loved is the comedy that’s sprinkled throughout.  There is a balance between the crime drama and comedy and, without giving away spoilers, there is one scene between Dave and Joe that is so funny and so full of sibling chemistry. Did they have that sibling bond from the start?
We had to shoot a five-minute promo video for funding. I cast Tristan right at the very beginning. I worked with him before and I knew he was my Dave. It was a matter of me finding my Joe and I was looking for him all over the place. I even tried to wrangle in Moe Dunford before he got too big, but he outgrew the project. John Connors suggested we use Graham for the promo. He stole every scene in this film promo and I wanted him to get the part. The promo became his unofficial audition. By the end of the day shooting the promo, the two boys got on brilliantly. They had instant chemistry and I knew we had our Joe. That scene you mentioned, if I sent you the raw audio you’d hear me giggling like a schoolboy. It was hilarious. We shot that scene for about six hours. Early on, I knew so much relied on that scene working because it was sort of a bittersweet moment of where these brothers bond. It’s a beautiful, intimate moment between two brothers that have been estranged for so long. We also know in that scene that there’s inevitable drama going on after that. There is an underlying sadness, but it is so funny at the same time.

At The Dublin International Film Festival (DIFF) this year you won awards and were given a long-standing ovation. What was it like to have that experience?
I often think because we came so close to not having that premiere because of COVID. If we didn’t have the premiere, I would have been a very different person during the lockdown emotionally. I’m not exaggerating, working on this had me on the brink emotionally and physically several times over the decade or so it took to make it. I think emotionally if we didn’t have that celebration, I would have been very angry about the whole thing. I think we all needed it, it was a kind of a spiritual release. It was the icing on the cake that we worked so hard. It was an honour being there with family and friends in the sold-out  IMAX screen and being able to show your family who has cried tears with me throughout the whole journey. It was one of the highlights of my life. I’ve had some memorable days in my life, thankfully that was right up there. I was buzzing the whole time through the lockdown. I had that moment that I worked hard for and I felt like lockdown was the holiday I had denied myself for over 15, 20 years. In fact, since the crash [Slattery was paralysed in a car accident in 1996 when he was just 17] I just went on this journey of trying to work my ass off to try and prove to people that I could still contribute to life. You know, despite the disability thing, I know it sounds kind of ridiculous even thinking it, but I just went on this mission to prove to people that I could still do something with my life. And that was the goal. And I was like a dog with a bone and I wouldn’t let go. So yeah, the lockdown period for me was a holiday, but it was also a reflection on 20 years of craziness.

Do you ever worry about people’s perception of a director who is a wheelchair user or is that ever something you would be concerned about?
At this point, I’ve earned the confidence to not worry as much, but there are times when I will be quite self-conscious particularly when you meet people for the first time. There’s this internal device that tells me, okay, I need to step up here and prove to them that they can rely on me. My only worry is not necessarily about my disability but is that they can trust that I can deliver what I said what I can deliver on the page. I work hard to try and prove to them that I can be as good as anybody else. It was something I worried about in the past, but not anymore. If someone doesn’t respect me or show me respect, I don’t have time for them. Not anymore.

Unlike many other films from early 2020, ‘Broken Law’ will get its day in the cinema – I assume you are glad it didn’t go down the streaming route?
Yeah, the timing was beautiful for us. We got our premiere and we also got to be able to put the project on ice until the lockdown lifted. We were lucky enough that we didn’t spend our distribution budget and then get derailed. We are so lucky to be working with Breakout Pictures. We met with them last year and we hit it off immediately. We felt we were on the same trajectory. They’re a fresh new company with ambition and are new with a lot to prove, but we also have the talent and ambition. It’s just been such an enjoyable journey because they’re lovers of the craft. You know, they’re not driven by money. They are a business, but they’re not driven that way, thankfully.

What do you want audiences to take away from the film?
I would love for them to come away and think it isn’t just your bog-standard crime drama. I would love for audiences to come away and think there’s a little bit more to that than meets the eye. There’s something there that might inspire audiences to think a little deeper about some of the characters and maybe identify with them or recognise them.  I’d also like them to think, on a professional level, that we made this film for 150 grand. Not a drop in the ocean in comparison with budgets that we’re competing with. So I’d also like them to come away from it not even considering it a low budget, it may be considered on par with any bigger budget film. And one more thing, I hope people will come away and say, well, that’s definitely good enough for me to want to know what Paddy is going to do next. If I can achieve that with audiences, then I might have a chance to make another film.

BROKEN LAW will open in Irish cinemas on July 31st