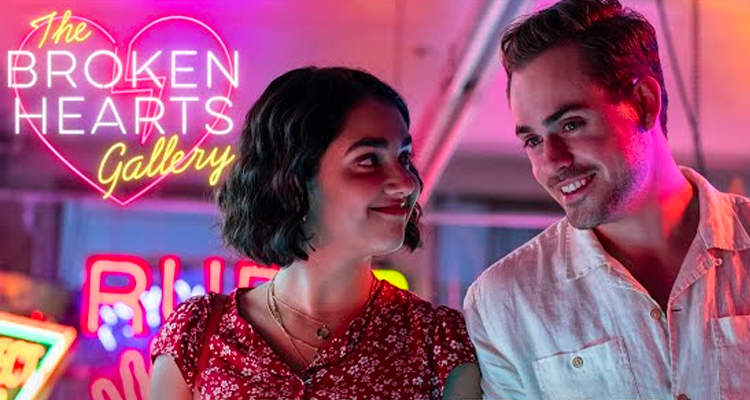 We caught up with the cast of brand new release ‘The Broken Hearts Gallery’ to talk about their refreshing modern take on the rom-com movie.  Dacre Montgomery & Geraldine Viswanathan give an insight on what it was like for two Australian’s to play two American’s while filming in Canada. The film from producer Selina Gomez follows the always unique Lucy (Geraldine Viswanathan), a 20-something art gallery assistant living in New York City, who also happens to be an emotional hoarder. After she gets dumped by her latest boyfriend, Lucy is inspired to create The Broken Heart Gallery, a pop-up space for the items love has left behind. Word of the gallery spreads, encouraging a movement and a fresh start for all the romantics out there, including Lucy herself.

Check out our video interview below :

I love that the film has an old fashioned rom-com feeling to it, but it is a refreshing, modern take. Was that one of the draws?
DM: That was exactly it. It felt fresh and relevant. I have a younger sister and it is the perfect film for her to watch. I’m excited that it’s about to live in the world.

What about you Geraldine?
GV: I think it just felt like this beautiful mix that feels nostalgic of those classic rom-coms that we know and love, but also it feels so modern and refreshing. I love the character of Lucy. I think she’s such a bold and inspiring woman who just wears her heart on her sleeve and is unapologetically herself. I think that she’s a really special character and I loved the friendship and the relationship with Nick and just all of these relationships just felt so truthful and lovely.

We’ve got two Australians playing Americans filming in Canada. What was that like? And did you know each other before you started working on this?
DM: We didn’t know each other before I met Geraldine at the chemistry read in LA several months prior. Shooting in Canada was wonderful. My mom’s actually from a small town close to Toronto, so that was really nice. I hadn’t spent much time in Toronto. It was lovely, but you’re right. It’s so funny two Australians playing Americans and shooting in Canada.

As actors, your job is to get the accent right, but as two Australians working together did you ever find yourself falling back into your natural accent?
GV: I didn’t find that, did you, Dacre?

DC: You’re great at the accent. It was hard for me to improvise in the accent. Geraldine is fantastic just thinking on her feet and staying in that accent world.

GV: I think more in between takes we’d be like “Great take, mate”

On the improv front Geraldine, you have a lot of experience in the comedy world but Dacre coming from Stranger Things to this, was it daunting? Was it an entirely different ball game for you?

DM: Extremely daunting, an entirely different ball game, but so much learning. And I think just trying to act like a sponge every day on set and soak up all that amazing genius and creative energy from Geraldine and Natalie, and the cast and crew was always my goal. It was lovely coming off Stranger Things and pivoting into a different direction – pivoting it’s my parents’ word for it!

Collecting things is a big part of this film so I’m wondering, do you guys collect anything?

VM: All the things! I collect every birthday card ever written to me, every letter. I’ll keep ticket stubs and I have a lot of shoeboxes under my bed with memories of good times. I think we all do that. Lucy just takes it to the extreme.

What about you Dacre?
DM: When I was younger, I had so much stuff. Randomly from the time I was about nine to 15, I collected San Pellegrino bottles. I had thousands of them and then I had the big float bottles of sparkling water with the wooden cases, the one hundredth anniversary ones. I think now it’s going to sound cliche, but now all I collect is emotional baggage. When I was younger, it definitely manifested in stuff. I used to go to my grandparents and they had old books that they’d had since the 1920s and 1930s and I’d roll the pages and smell the oxidizing paper, you know? I think that idea of a good vintage component was a big thing to me when I was a kid like my dad’s old clothes. I’d wear his shirts, not so much anymore. I try to minimize my space now.

One of the things that I love is that it’s a love story between Nick and Lucy, but it’s also a love story about friendship. Lucy has the girls, Nick has Marcus. Did you feel that as well? That it is as much about friendship as it is about a love between Lucy and Nick?
VM: They are so instrumental in Lucy’s whole journey. It’s so highly relatable. We all need those people in our lives that’ll just know exactly how to pick you back up when you’ve fallen down. It was something that I was drawn to in the movie. We got so lucky with Molly Gorden and Phillipa Soo and Arturo Castro. We became actual friends, it was so fortunate that we didn’t have to pretend.

You guys have so much chemistry on screen, did you have a lot of rehearsal time as well or is that something that came naturally to you both?
DM:  Not really, we didn’t have much time.

GM: We had a week when we were reading the script and the scenes together and got to voice any ideas or concerns or thoughts we had. I think you can’t even really rehearse that stuff. I think it just kinda clicked.

DM:  I think as well when you’re talking about the friend component being a bedrock to most good relationships. Geraldine and I just have a very easy, friendly rapport. It’s not even like you’re replicating it. Like we were talking earlier about the accent and coming in and out of it off-camera. It’s easy working with another Australian. There is an identity there. I feel like it is inbuilt in terms of having banter so I think that aided the sense of both the friendliness and then what became this level of romanticism. That play between the two is what sparks electricity in a relationship. In my relationship, my partner is also my best friend. That’s what helps.

We’re living in a crazy time. So many films are going straight streaming or video on demand. How happy are you that this is getting a cinematic release?
DM: I’m the number one cinema guy. I just did a podcast and we talked for an hour at length about cinema and how streaming has changed the game and how fortunate I feel to have something coming out in the cinema. It’s such an unusual time and it’s a time of change and I don’t think it’s settled yet in terms of what this new world will look like, but I think there’s nothing you can match the cinematic experience because it’s a combined collective experience and all of those smells that you associate. And I just hope that Geraldine and I aren’t the last demographic that has a level of sentimentality built into those smells and that combined experience.