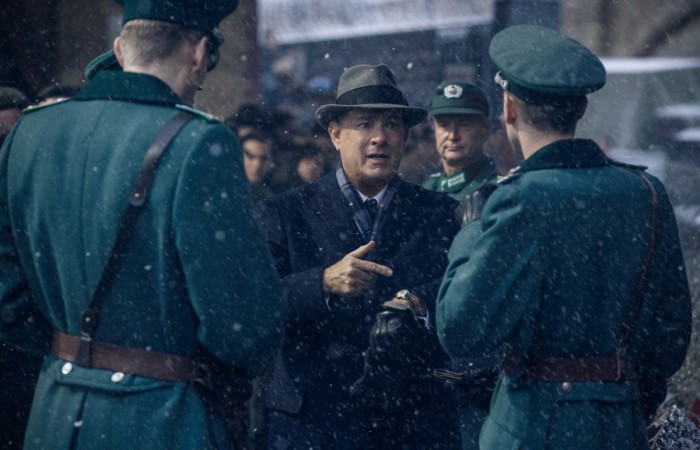 BRIDGE OF SPIES (USA|India|Germany/12A/141mins)
Directed by Steven Spielberg. Starring Tom Hanks, Mark Rylance, Jesse Plemons, Alan Alda, Amy Ryan.
THE PLOT: During the Cold War in 1957, a Soviet spy named Rudolf Abel (Mark Rylance) is caught in Brooklyn, and charged for his crimes. Insurance lawyer Jim B. Donovan (Tom Hanks) is drafted in to represent Abel, to ensure he gets a fair trial. After convincing the judge that Abel should not be put to death for espionage, and after a U-2 spy plane is shot down over Russia, Donovan travels to Berlin to negotiate a prisoner exchange between the two countries.
THE VERDICT: Based on the true story of Jim B. Donovan, pilot Francis Gary Powers, Rudolf Abel and a US student in Germany who found himself caught up in the negotiations, Frederic Pryor. This is not Tom Hanks’ first foray into Cold War drama, and it has all the feel of a Steven Speilberg film. Although the running time is a whopping 141 minutes, ‘Bridge of Spies’ is almost always engaging, even when it becomes complicated and meandering.
Tom Hanks, as usual, is on wonderful form as Jim B. Donovan. Hanks plays the character like he is the embodiment of all the best parts of America; patriotic but not radical, fair, and concerned with the well being of his fellow man. Hanks is engaging and endlessly watchable on screen, and makes Donovan the heart and soul of the film, as he fights to do the right thing, even if it is not the popular thing. Mark Rylance is wonderful as Soviet spy Rudolf Abel; endlessly calm and pragmatic, and consistently wondering if worrying would help make things different. The rest of the cast is made up of Alan Alda, Jesse Plemons, Domenick Lombardozzi and our own Eve Hewson turning up.
The screenplay for the film was written by Matt Charman and Joel and Ethan Coen, and is based – as mentioned – on real events. The first hour of the film focuses on Rudolf’s trial, the hardships endured by Donovan for representing a spy, and the gentle respect that grows up between the two men. The remainder of the film casts a wider net, with Donovan going off to Berlin to negotiate in secret, and trying to sort lies from the truth. This, after the U-2 plane is shot down in graphic detail, is where the film begins to meander, and get caught up in the depths of the politics going on at the time.
Director Steven Spielberg has created an intriguing film that explores the depth of danger during the Cold War, and is perhaps one of the first narrative feature films to show the Berlin Wall actually being built. Among all the intrigue and engrossing performances, there is a slightly muddled feel to ‘Bridge of Spies’ however, with the 141 minute running time only serving to muddle things further and drag things out. Thankfully, Tom Hanks and the rest of the cast are engaging enough to keep audience interest.
In all, ‘Bridge of Spies’ is an engaging and well-acted Cold War thriller. Rylance and Hanks are engrossing in their roles even though the running time is a little too drawn out, the politics slightly dense and the final moments of the film just sentimental enough to be considered truly Spielberg-ian.
RATING: 4/5
Review by Brogen Hayes