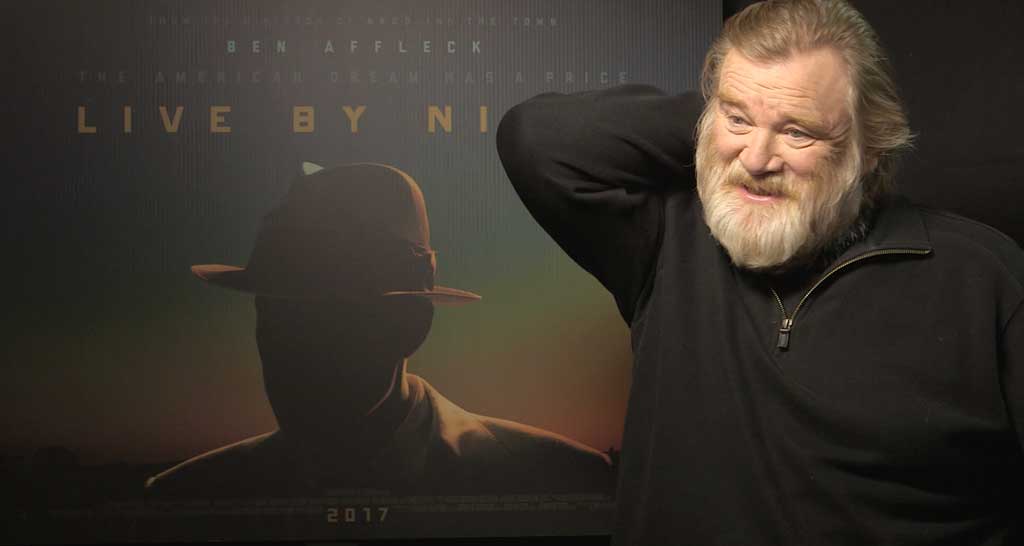 Ben Affleck has had a massive career resurgence of late, and that can almost be putt entirely down to his taking on the directors chair. ‘Gone Baby Gone’, ‘The Town’ and ‘Argo’ were all loved by audiences and critics alike, and for his fourth outing Live By Night, he’s amassed another hugely impressive cast, including our own Brendan Gleeson.

We sat down with the local legend to talk about the gangster epic, what its like working with actor/directors, and his hugely impressive career to date.

WATCH THE BRENDAN GLEESON INTERVIEW BELOW

WATCH THE TRAILER FOR LIVE BY NIGHT

So you get a call by Ben Affleck asking will you play his Dad in his new movie, what was that like?
He didn’t actually have my number, so it came through the usual channels. (Laughs) But obviously I was immediately interested. It was a short enough stint, just two to three weeks over here, but I think he’s great, I love his films, and it was a properly written script. There was no negative side to this at all.

When it comes to Ben Affleck, does he have a specific person in mind when he’s casting, and then gets that person, or did you have to go through a casting process?
I didn’t have to go through a casting process, as far as I know. You don’t have to know all of these things, I just get the call that says “Ben would love to have you in his movie”, and you just have to pretend that that’s the truth. (Laughs)

And is that enough for you to say yes to the project?
It helps! It helps an awful lot if you admire the person. You want to work with the best people, and Ben is one of the best people, so of course that makes a difference, yeah.

Leonardo DiCaprio was supposed to play the lead role before he dropped out and Ben took on the part himself. Is it different for you as an actor to have the director also be a co-starring actor?
Well, I did Braveheart, so it was a long while back when I saw how that would work. He’s very disciplined and very authoritative. It’s very calm and you’re never left wondering what it is that he wants. At the same time there’s space there for you to bring your own stuff to the table, he was very open to new ideas. It was just a question of getting in and doing it. It was really, really cool, there was loads of time to do the takes you needed, there was no time wasted on takes that weren’t needed, and generally it was just a great way to work.

The Irish accent is notoriously difficult to get right…
Oh yeah, I know!

But Sienna Miller’s Irish accent in this movie was incredible. Having you on the set, did you get a lot of the actors coming over asking for pointers on how to do the accent?
That can be a bit of a double edged sword. Because when someone has been working on it and already committed to it and then someone comes in who is actually from wherever it is that you’re meant be doing you’re accent from, because she did come up to me and ask me “Was that good?” and I’d say “Yeah, yeah, it’s getting in there”, but you don’t want to be getting into the difference between Cork and Kerry. Because really, at that level, you don’t want to be getting too exacting in terms of what you want to be laying on, so I just tried to stay away from the whole thing! So just every now and again they’d ask and I’d throw out a few suggestions and you’d see their eyes starting to bounce around so I just learned to say nothing! (Laughs)

Looking at your IMDb page, there’s so many bucket list entries, what with working with Spielberg, Scorsese, being a part of a big Tom Cruise action epic. Is there anything left genre wise or people you haven’t worked with yet that you still wanna do?
I was always hoping to work with The Coen Brothers, but then Domhnall went and worked with them instead. So… Yeah. (Laughs) But I don’t really think about it in that way, in terms of people, because it’s usually just about the thing itself. I don’t want to do things just to tick them off, I really don’t. I mean I was thrilled to be able to work with Scorsese and Spielberg and all these people, but really it’s about the quality of the work that you’re going to be able to do with them. I’m not interested in my CV at this point, it’s about getting your teeth into something that’s worth getting into.