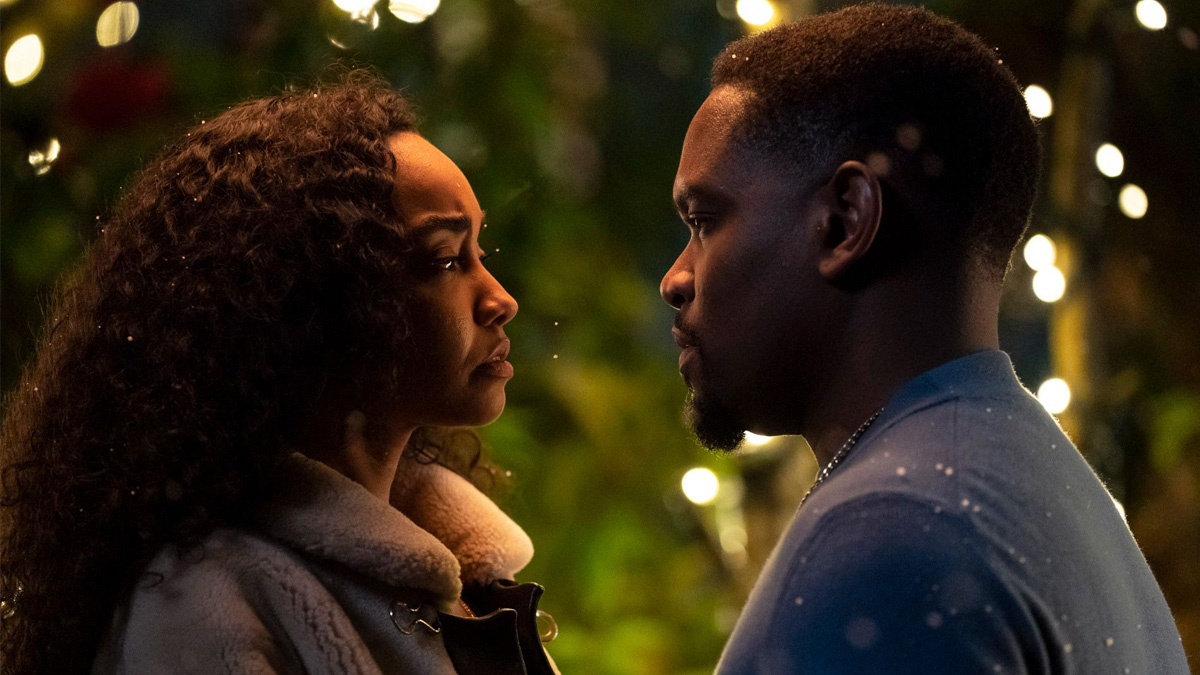 The Plot: British-born author Melvin (Aml Ameen) has made it big in America. He has a loving girlfriend in Lisa (Aja Naomi King) but remains nervous about having children – much to Lisa’s disappointment. Melvin has been running from something though – his family. Double trouble on Boxing Day resulted in him fleeing to America and now he must return to London to face his family. There’s also unfinished business with his jealous ex Georgia (Leigh-Anne Pinnock), now a famous singer…

The Verdict: Christmas movies. You know where you stand with them. They’re either going to be very silly, very soapy or hopefully something subversive and offbeat to balance out the saccharine-induced groans of predictability. The Black British-themed Boxing Day has oodles of the first two served up with a faux festive grin, but none of the latter to make it something memorable. It’s entirely disposable seasonal fluff, moving through its gears like a creaky old bicycle left rusting in the shed before serving up a Love Actually-inspired ending. On paper, it wants to be one of those superior Richard Curtis romcoms. Instead, it has all the impact of a Christmas cracker with the banger and toy removed. All that’s left is a corny joke and a cheap paper hat to try and cheer you up unconvincingly as you endure through it.

The intention seems genuine, with multi-hyphenate co-writer/director/actor and producer Aml Ameen’s own family life inspiring these chaotic shenanigans over a few days at Christmas. Having made an impression in Idris Elba’s directorial debut Yardie, Ameen has a good sense of working with his actors to create amiable characters to drive the plot forward. There’s also a British-Caribbean flavour to the proceedings. The problem though is that the plot leaves a lot to be desired, moving through very predictable beats. Melvin doesn’t just have relationship issues, he also has family issues that need to be worked out. Coming together to celebrate may mean breaking further apart, with the titular day being marked as one in which Melvin’s father left his marriage and Melvin almost proposed. In between all that, there’s much staring of daggers between Lisa and Georgia as they battle for Melvin’s confused heart. It’s the stuff of soap operas, somehow being dragged onto the big screen and served up as being acceptable.

At face value, it’s not even really a Christmas movie. Yes, there’s some good cheer and familiar familial conflict but that’s your basic lot. Melvin even admits to Lisa that his family doesn’t celebrate Christmas, so why present itself as a cosy Christmas movie then? It also appears to take place in an alternate 2021 where you-know-what is not rampaging through the world, adding further to its unreality. There’s a half-hearted attempt here to get all the disparate elements to gel together in the end, in a cliched let’s-put-on-a-show scene. Ameen and his actors work well, but there’s a general laziness to the whole affair that undoes it in the end. It’s a dull and unexciting offering when there are so many more interesting films out right now. This Boxing Day present isn’t really worth opening then. It’s no seasonal classic and is more likely to end up in the Christmas DVD bargain bin next year.

In short: Not worth opening