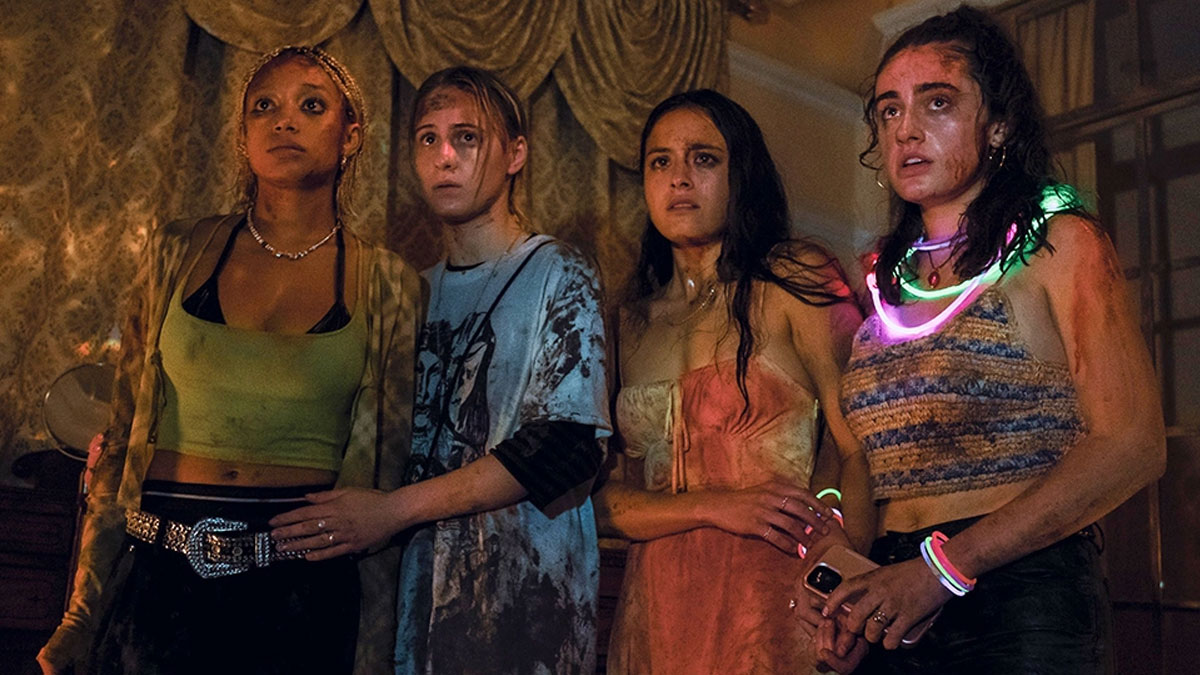 The Plot: Sophie (Amandla Stenberg) brings her new girlfriend Bee (Maria Bakalova) to the house of rich friend David (Pete Davidson) for a wild weekend ‘hurricane party’. Among the other guests is podcaster Alice (Rachel Sennott) and her date Greg (Lee Pace). Late at night, they settle on playing a pretend game of guessing who is the murderer after the lights go out. When they come back on, they bicker about who is the wolf among the flock. That is, until one of them ends up as a non-breathing corpse. As tensions among the group rise to breaking point, let the real game of Bodies Bodies Bodies begin…

The Verdict: The long cinematic tradition of the mystery whodunit is having something of a moment. Figuring out who offed who, when, how and why can be a lot of fun for audiences. It’s also a showcase for actors to deftly move between the lines of being entirely innocent to a red herring and maybe even something more nefarious. An eagerly anticipated sequel to Knives Out is due at Christmas and this week alone there’s not one but two offerings. The modern whodunit on offer is Bodies Bodies Bodies, a typically engaged and edgy affair from A24 Films. Moving away from their normally eerie and psychological elevated horrors to one of hip horror is an interesting move for them. While it owes more than a little to Agatha Christie’s masterpiece And Then There Were None (a storm, an isolated setting, hidden motivations floating to the surface), the tone here leans more heavily towards Scream and recent British comedy of errors All My Friends Hate Me.

That’s an apt title, given that Bodies Bodies Bodies is ultimately about a group of supposed friends who really hate each other’s guts – when they’re not otherwise spilling them out on murderous rampages. There’s a killer(s) in their midst, as they wander about the house without electricity initially just messing around before someone really gets hurt. This is when the truth about their friendships and interpersonal relationships is put to the test to see if they can pull together in the face of impending death. It’s likely that audiences might end up hating the characters as much as they hate each other. That appears to be the point. With a story by Kristen Roupenian and a screenplay by Sarah DeLappe, this film doesn’t try to disguise the fact that these characters are obnoxious to the core and that bloody death might be a relief for all concerned. Even the audience surrogate Bee is not without her own concerns as she too frays under pressure from the others. It’s peer pressure amplified to toxic levels as they point the finger – or knife – at each other.

It’s a small miracle then that director Halina Reijn manages to overcome the film’s potential nuclear incident to shake up the whodunit formula and make it fresh and funny. It’s OK to laugh at the characters, especially the insufferable Alice who gets to deliver the film’s best line. Rachel Sennott, the breakout star of one last year’s best films Shiva Baby, has a ball with her babbling, vacuous character. Everyone else is having a good time, even when they’re at each other’s throats. It’s this playful sense of pitch-black humour about the characters that gets the film over the finishing and out of the danger zone. Otherwise, it would be a difficult watch even as a whodunit. Although, who actually done it becomes less important as the bodies pile up. It’s more about the how and the why. However, the film isn’t as smart as it think it is. It really just rests on one scene at the end, which emphasises the stupid futility of it all. It’s something of a letdown, even as it tries to be funny about it. There are also minor details in the film that don’t add up, like indestructible mobile phones that don’t leak or reception that comes and goes depending on the time of day (well, calling the police would be, like, an inconvenience). All the same, Bodies Bodies Bodies is dead funny, ground-level horror that’s a bloody cut above the usual slasher. 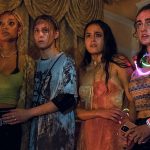