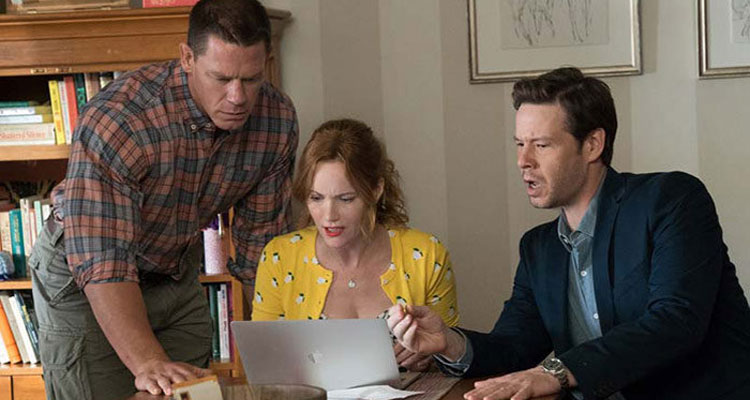 BLOCKERS (USA / 16 / 102 mins)
Directed by Kay Cannon. Starring John Cena, Leslie Mann, Ike Barinholtz, Geraldine Viswanathan, Kathryn Newton, Gideon Adlon.
THE PLOT: Best buds Kayla (Geraldine Viswanathan), Julie (Kathryn Newton) and Sam (Gideon Adlon) have graduated from high school and are about to celebrate prom night. This being a formative experience in the move from childhood to adulthood, the trio decide on a sex pact to finally do the business. Their respective parents Mitchell (John Cena), Lisa (Leslie Mann) and Hunter (Ike Barinholtz) have other ideas though. Upon finding out, Mitchell and Lisa are incensed, believing their daughters to still be children. Hunter isn’t as concerned, since he’s already clued in to the fact that Sam prefers girls. The trio set out on a long night to block the hanky-panky…

THE VERDICT: The sweet taste of ‘American Pie’ lingers in ‘Blockers’, a comedy that is better than anyone had a right to expect. It’s not hard to see the similarities with the breakthrough 1999 film. Millennial Pie so to speak, as it focuses on Prom Night and a group of now young adults partying a lusty night away. However, ‘Blockers’ strikes out on its own by focusing as much on the overly concerned parents as its young leads. This leads to hilarious results, showing the contrast between the killjoy parents and their children as they move towards recognition as adults.
The script by Brian and Jim Kehoe makes good use of this early on, hinting at the fact that the trio of parents were teenagers themselves at one stage. In the eyes of our parents we’ll always be children though. The attempts of these middle-aged parents to get down with the kids at a prom night party is frankly embarrassing, but it makes for great comedy. Debut director Kay Cannon, a co-producer on the Pitch Perfect sequels, mines the comedic potential of Cena’s dumb lug for maximum effect here. Likewise for the obsessively maternal Mann and the laid-back Barinholtz, who get into awkward scrapes with some kinky neighbours.
The script scores high on the laugh-o-meter, delivering some great gags. Though, the funniest gag from the trailer (Mitchell’s superhuman strength) is noticeably missing from the final cut. As is standard for these types of films, there are some gross-out moments which feel inserted for shock value. The comedy isn’t very sophisticated here, delivering a slightly pat, predictable message about acceptance, growing up and taking responsibility. For all its outrageous humour, gross-out moments and daftness, it’s really a rather sweet, likeable film. Given how many recent American comedies have utterly failed to be funny (e.g. Father Figures), ‘Blockers’ has a winning streak that brings it over the finish line with ease, just dodging a banana peel.