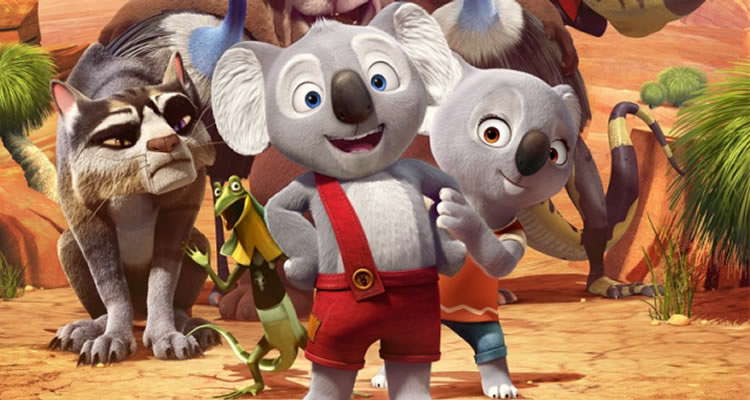 BLINKY BILL: THE MOVIE (Australia | USA/G/84mins)
Directed by Deane Taylor and Noel Cleary. Starring Toni Collette, Rufus Sewell, Ryan Kwanten, David Wenham, Richard Roxburgh.
THE PLOT: A year after Blinky Bill’s (Ryan Kwanten) father left the family home in Green Patch and set out on an adventure, he still has not returned. With goanna Cranklepot (Barry Otto) determined to take over the village, Blinky sets out on an adventure to find his dad and bring him back home.
THE VERDICT: First appearing in book form in 1933, koala Blinky Bill has been a staple of kids’ literature for almost 100 years, but even though the books are not well known at this side of the world, they have never been out of print in their native Australia, and Blinky has been incarnated in TV and movies before. This new outing for the character and his friends was co-produced by Telegael, but struggles when pit against recent outings from more assured animation studios.
The cast of the film is an impressive one, and boasts appearances from True Blood’s Ryan Kwanten, Baz Luhrmann favourites David Wenham, Richard Roxburgh and Barry Otto, as well as voice work from Rufus Sewell, Toni Collette and Deborah Mailman. While the cast do fine with what they are given, the trouble arises with the clunky dialogue they are given, and a story that feels rather outdated.
Screenwriter Fin Edquist has made the story for the film not make a huge amount of sense – why is a koala going off to rescue other animals in the first place!? – and populated it with problematic characters such as a misogynistic lizard and a power hungry goanna that seems like he is spouting lines from a Brexit campaign. As well as this, the dialogue for the film is uninspired, the main villain seems like a rip off of Scar from ‘The Lion King’, and a koala mourning her place in a zoo seems rather uncomfortable. There is an attempt to inject a moral to the whole tale, but the message of animals threatening to “smash” one another if things go wrong doesn’t seem like a very wholesome one.
As directors, Deane Taylor and Noel Cleary try to make the film a well paced adventure, but with a dodgy script and some even dodgier animation, this is a losing battle. The animation for the film often feels unfinished and, when placed against recent output from more established and well known studios, ‘Blinky Bill: The Movie’ begins to feel very shoddy indeed, and as though it was made for TV but somehow found its way onto the big screen.
In all, ‘Blinky Bill: The Movie’ is a twee, badly animated and badly scripted film that tries its very best to be fresh and engaging, but struggles to overcome its own issues.
RATING: 1/5
Review by Brogen Hayes