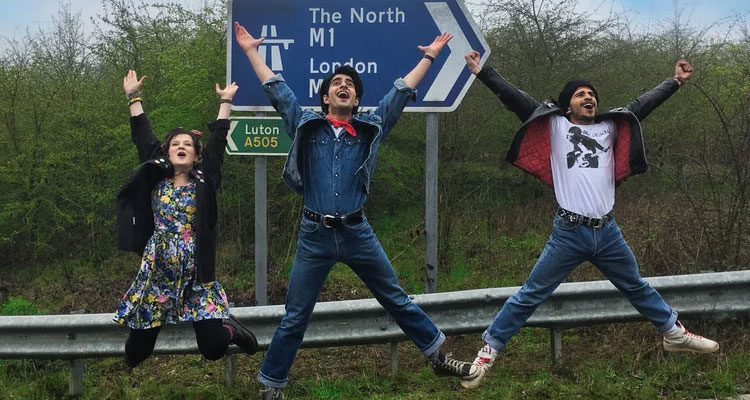 Blinded By The Light

The Plot: Luton, 1987. British teenager Javed (Viveik Kalra) longs for the day when he can escape the humdrum reality of his life in Thatcher-era Britain. He’s from a traditional Pakistani family and that means following everything his closed-minded and now unemployed father Malik (Kulvinder Ghir) says. Malik has Javed’s life planned out, but Javed has other ideas. He wants to be a writer who writes about things that matter to people. Unsure of what that means right now, a friend introduces him to the music of Bruce ‘The Boss’ Springsteen. In the lyrics and wise words of the man himself, Javed finds a common, universal voice that doesn’t preach. Springsteen’s ground-level words speak to humanity as a whole. Spurred on by his English literature teacher Ms Clay (Hayley Atwell), he sets out to make his dreams a reality…

The Verdict: Within the first few minutes of certain films, you can tell that you’re on to a winner. It could just be the grin that it puts on your face, a quick identification with a main character’s situation or the energy that is being set up, waiting to erupt in a joyous celebration of life, music and love. That’s very much the case for Blinded By The Light, a British film inspired by a real-life fan of Bruce Springsteen and how The Boss’ music changed his life – for the better. It’s also a return to form for director Gurinder Chadha after a number of OK but forgettable films. Her new film recaptures the youthful energy and fun of her breakthrough film Bend It Like Beckham, while also acting as an affectionate tribute to Springsteen himself. It’s a film for dreamers everywhere, with a simple message of never stop dreaming.

Chadha’s spot-on script with Sarfraz Manzoor and Paul Mayeda Berges captures the weary desperation of our lead character, Javed. He’s torn between loyalty to his family and loyalty to himself, to pursue what he really wants. His father Malik wants him to be Pakistani rather than British, failing to understand that exposure to other cultures is important to form a wider and more knowledgeable world view. Javed’s discovery of Springsteen’s music is filmed in a dynamic way during a storm, when his emotions are on fire and he’s truly dancing in the dark. The imaginative use of titles during this sequence along with Chadha pumping up the volume for Springsteen’s music makes it a standout in a film of many great sequences. It’s not a musical per se, but a film about music. Unlike Bohemian Rhapsody though, the fusion of a famed musician with a three-dimensional story is seamless.

Bruce Springsteen may be more heard than seen in this film, but he’s very much a character in his own right. The way that Chadha weaves his music into the script and its character development of Javed is done in a way that is subtle and profound. The interplay of music and character comes across as natural, a platform for Javed’s emotions which Malik doesn’t notice – or want to notice. In his feature debut, Viveik Kalra brings an earnestness and resolve as Javed. He’s a fine young actor, given that the film pretty much rests on his shoulders. He makes it look easy though, even up against more established actors.

There are some slight missteps here and there. A sub-plot involving the ugly face of National Front bigotry comes across as an unnecessary addition, bumping up the near 2-hour running time in the process. It’s enough to suggest it, rather than make the point with banners and thuggish protests. However, Blinded By The Light (named after one of Springsteen’s songs) gets so much right – from the amiable characters to the excellent use of music – that it wins out triumphantly in the end. And by that end, you’ll still be grinning from ear to ear to the tunes of The Boss himself.