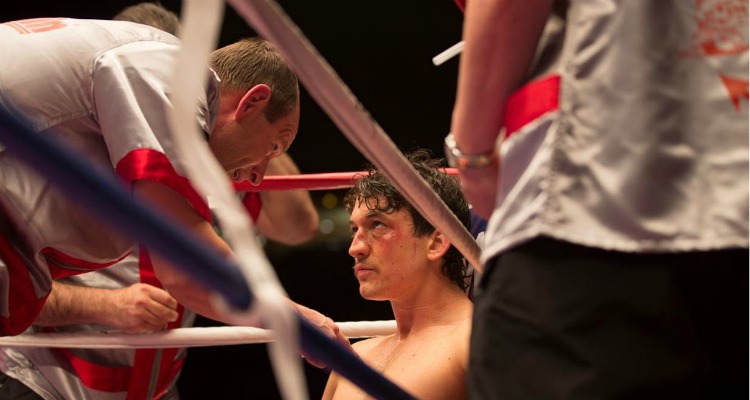 BLEED FOR THIS (USA/15A/117mins)
Directed by Ben Younger. Starring Miles Teller, Aaron Eckhart, Katey Sagal, Ciarán Hinds, Ted Levine
THE PLOT: In 1991, after being told to retire by his manager, boxer Vinny Paz (Miles Teller) won the WBA World Light Middleweight Title against highly rated fighter Gilbert Dele. Not long afterwards, Paz was involved in a terrible car accident, where his neck was broken. Although doctors told Paz he would never fight again, he disobeyed their orders to make what is considered to be the greatest comeback in boxing history.
THE VERDICT: Boxing films are having something of a renaissance at the moment, with the newest instalment in the Rocky franchise – ‘Creed’ – released earlier this year, and the Robert DeNiro vehicle Hands of Stone still to come. Vinny Paz’s comeback is a sensational true story, but there are times when the character feels underdeveloped on screen.
Miles Teller easily carries the film on his shoulders, he makes Vinny Paz a tenacious and stubborn character, but he struggles to make the character anything other than a boxer who will do anything it takes to succeed. The audience learns very little about Vinny Paz, other than the superficial and his love for his sport, and that’s where the film begins to struggle. Aaron Eckhart plays Vinny’s trainer and sometime voice of reason Kevin Rooney and Ciarán Hinds rounds out the central cast as Vinny’s father Angelo Pazienza. The rest of the cast features Katey Sagal, Christine Evangelista, Ted Levine and Amanda Clayton.
Ben Younger’s screenplay is based on the true story of Vinny Paz and his incredible comeback as a boxer, but without the full development of Vinny as a character outside the ring, the audience may struggle to root for a character that is admittedly charming, but seems mostly stubborn and a little suicidal. The screenplay is remarkably free from cliché however, and tries to avoid the usual boxing movie familiarity that we have seen on screen in the past.
As director, Ben Younger tries his best to keep the film moving and to give the audience a chance to root for the central character, but since it seems as though there are two comeback stories squashed into the film’s running time, it is surprising that there are segments of the film that feel slow and drawn out. Aaron Eckhart and Ciarán Hinds are strong in their roles, but while Miles Teller carries the film with what he is given, it would have made for a stronger film to know more about Vinny Paz as a person, not a boxer.
In all, ‘Bleed for This’ is a decent boxing movie, based on an incredible true story. The performances are strong, although some of the characters are drawn a little thin, and the film struggles with some sluggish pacing from time to time.
RATING: 3/5
Review by Brogen Hayes