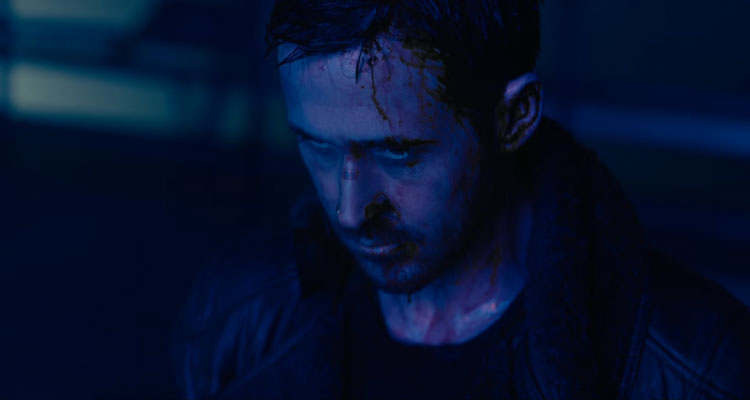 BLADE RUNNER 2049 (UK|USA|Canada/15A/163 mins)
Directed by Denis Villeneuve. Starring Ryan Gosling, Harrison Ford, Ana de Armas, Jared Leto, Robin Wright, Mackenzie Davis, Dave Bautista.
THE PLOT: Los Angeles, 2049. In this rain-soaked, toxic snow-encrusted environment, a new world order of obedient replicants has arisen. Having taken the baton from the now defunct Tyrell Corporation, designer Wallace (Jared Leto) is leading the way. However, there are older models still on the streets. Police Officer K (Ryan Gosling) is tasked by boss Joshi (Robin Wright) with hunting them down and retiring them. When not retiring, he lives with his girlfriend Joi (Ana de Armas), the only joy in his grim life. A clue from a dead replicant leads him to take a journey into the past and one of self-discovery, which may be connected to long-missing former Blade Runner Rick Deckard (Harrison Ford)…
THE VERDICT: Hats off to you, Denis Villeneuve. You’ve done a man’s job, sir. Ridley Scott’s 1982 visionary masterpiece ‘Blade Runner’ was a hard act to follow. Even Scott has yet to surpass it. So, when Scott decided to return to another of his earlier films, ‘Alien: Covenant’, he gifted the ‘Blade Runner’ sequel to the French-Canadian director of Prisoners and Arrival. No major pressure then. However, what Villeneuve has done is created a film that is every second and inch the equal of its predecessor, standing proudly shoulder-to-shoulder with it.
The script by returning screenwriter Hampton Fancher and Michael Green, based on characters created by another visionary futurist, Philip K. Dick, was described by Villeneuve and Ford as one of the best they’d ever read. It certainly stands up well to scrutiny, with not a single plot hole or character left unchecked. At the request of Villeneuve though, little in the way of plot will be revealed here. He has certainly earned that much respect from a film reviewer. What can be said though is that it deals with both grand and intimate themes, expanding upon the impressive groundwork laid down by Scott in the first film.
Like any sequel worth its salt, the story develops the characters, the environment and the grand themes about what it means to be human in a world increasingly full of synthetic beings. And then some. Villeneuve goes further still, pushing the story to its limits, stretching it to see where it leads Officer K. It’s quite a journey, luxuriously spread out over 163 minutes. However, not a minute is wasted here in driving the plot forward. The extended running time allows you to bask in the immense, fabulously-designed world that Villeneuve has created here.
Villeneuve has assembled some of the best creative artists in the business to bring his vision of the future to life. Dennis Gassner’s production design is jaw-dropping, full of neon-soaked cityscapes, dusty deserts full of abstract statues and rooms that each have a character of their own. Roger Deakins’ sharp cinematography captures this in remarkable detail (best experienced in IMAX). There’s a seamless blend of visual effects, models and one character scene in particular that confounded even this reviewer’s expectations about how it was achieved so flawlessly, when other films have failed to convince on the technology required. All of this is rounded off by Hans Zimmer and Benjamin Wallfisch’s throbbing score. The performances don’t get lost in this visual and aural assault, with Gosling and Ford digging deep into their characters for some soul-searching.
Put simply, ‘Blade Runner 2049’ is a bold, confident, modern masterpiece that doesn’t set a single foot wrong. Everyone involved has clearly put in 110% to make the film the very best it can be. It goes in unexpected directions, treating its audience with intelligence and respect, while posing exciting new questions to ponder as the film sinks deep into your consciousness. If Arrival was just a warm-up to Villeneuve’s brand of cerebral, Nolan-like sci-fi, then the masterful ‘Blade Runner 2049’ is the pay-off. The long wait has been worth it – the film of the year is here.
RATING: 5 / 5
Review by Gareth O’Connor