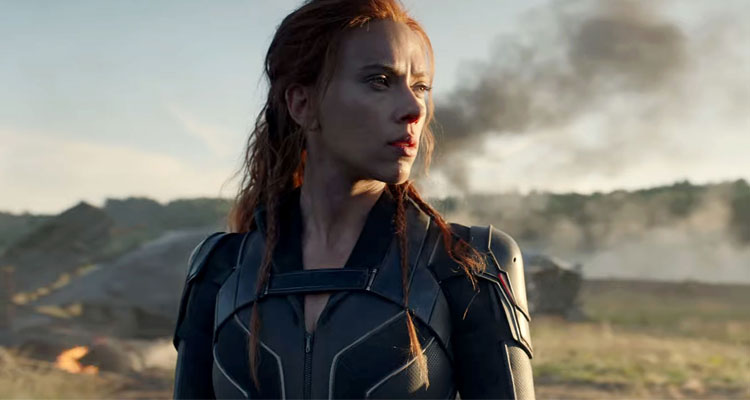 BLACK WIDOW – Behind The Scenes

She has appeared in seven Marvel Cinematic Universe (MCU) films and has been an essential member of the Avengers since she made her first appearance in Iron Man 2. Finally, eleven years later, we are getting a standalone Black Widow (Scarlett Johansson), which die-hard fans have been desperate to see. The film is set after the events of Captain America: Civil War which saw the Avengers come to blows and forced some of the members, including Natasha Romanoff, to go on the run. During this time, Natasha Romanoff’s past comes calling and, once again, she sets out to mends for her time as a Russian assassin.

We had the chance to attend the virtual global press conference and hear what Scarlett Johansson, and her fellow castmates Florence Pugh, Rachel Weisz, David Harbour, had to say about the film. The cast was joined by the film’s director, Cate Shortland, and Kevin Feige, the powerhouse behind the MCU.

Director Cate Shortland says that the film aims to combine action and a greater understanding of Natasha Romanoff. “At the start of the film, Natasha is alone. We knew we had to deal with who she is as an individual and what had happened to her in the past. I wanted it to be fun. I thought it should be like a fairground ride, really exhilarating, and we wanted it to be raw and that those things would seamlessly mesh.”

A Black Widow movie could have been set at any time. Feige explains why they chose to set the film post-Civil War. “We knew there was a large period of her life that we didn’t know about, not just her childhood, but this period between Civil War and Infinity War. We felt it was right to be able to discover more about her past and give a hint at the legacy in the future, all at the same time.”

The film brings Natasha close to her family, reminding her of darker days and her Avengers family, who she has been forced to leave. Johannson explains what changes this brings to Romanoff’s character.

“At the beginning of this film, Natasha is alone for the first time. She finds herself floating in this weird in-between space, and she’s off her game. She realizes that she’s got all this possibility in front of her, and it is really suffocating. She is blindsided by this person who comes from her past, and she is thrown even more off her game. It’s great to see her like that. We never get to see her like that. She’s just full of doubt.”

For Florence Pugh, stepping into the MCU could have been daunting, but she says the process was made easier by Shortland’s directorial style and the film’s excellent script. “From the get-go in the script, it was obvious that they have this connection, and they have this relationship, and despite, you know her skill set, she is that wonderfully annoying younger sister that says all the right things in all the wrong times. It wasn’t hard at all for me to get into that. I really appreciated Cate, who was so welcoming of me, to figure out how she thinks and how she moves and what she wears, and that was such a fun part of figuring out this character. She comes out of the Red Room and can start life, and she can buy clothes, and she’s excited by it. Kate really encouraged me to find the oddities in her and lean on that.”

Pugh also says that her first week on set brought her closer to Johansson, albeit in an unusual way.

“On my first day, I was throwing Scarlett up against a wall, and she was smashing my face into a sink. There is no greater way to break the ice than really wrestling Scarlett Johansson to the ground. We got to know each other and become friends.”

Johansson agrees that although it was unusual, it was a great way to bond with another actor. “It definitely was an icebreaker! I am very lucky because Florence is an athletic person and has a background in dance. She nailed all the choreography and was game to go at it, which was great because it is such an emotional fight. It’s all driven by emotion; there’s no real end goal. It’s just two people expressing their frustration, also their affection for one another. They are like two lion cubs going at it. It was such a unique way to bond with another actor and a great way.”

Rachel Weisz plays Melina, the matriarch of this troubled bunch. She says that she loves acting in films that have strong female plotlines. “I love stories about women, directed by a woman. I love playing opposite women. I really loved playing opposite David Harbour as well, I don’t want to leave him, but it was wonderful to tell a story with three complicated, strong women.”

David Harbour plays Alexei, a character who brings a lot of comedy to the film. He said there is more to his character’s humour than meets the eye. “The humour of this character is because he is filled with grief and remorse about the choices that he’s made [in the past]. The comedy comes out of the ego that he has built to defend against the feelings of that remorse.”

Harbour also says that the family dynamics are also inherently funny. “There’s a traditional shot which I believe is the perfect image of the movie, all of us sitting around the table, but we’re all in Super Suits. I found all of us falling into these traditional cliché roles and then, like, riffing off that was like really fun and satisfying as well.”

Asked if we might see other character’s backstories comes to the screen, Feige gave a coy answer “The notion of exploring the past, present and future of the MCU is certainly in the cards for all of our characters.” We will have to watch this space, as the saying goes.

Black Widow releases in Irish cinemas from July 7th and on Disney+ with Premier Access from July 9th.