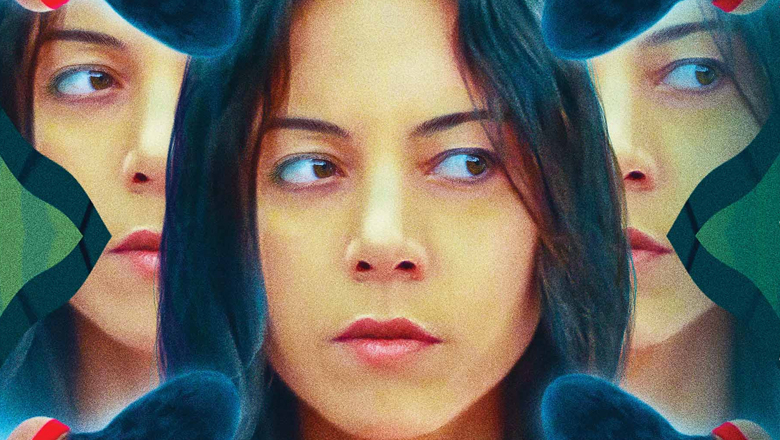 The Plot: Alison (Aubrey Plaza) has hit a creative block. A former actor with a reputation for being ‘difficult’, she’s now on the other side of the camera as a director. She heads to a country lakeside retreat to clear her head and find a way forward. She rents out a room in a house owned by musician Gabe (Christopher Abbott) and his pregnant wife Blair (Sarah Gadon). As the trio talk and get to know each other over dinner, the self-hating Alison develops an attraction to the chauvinistic Gabe whose bleak worldview chimes with her own. Things are about to get ugly between them, feeding into Alison’s creative energy…

The Verdict: The real creative life of an artist and the artifice of filmmaking come crashing together in Black Bear. It’s a deliberately obtuse film from director Lawrence Michael Levine, loosely inspired by his dreams and, perhaps, his frustrations as a filmmaker in his own right. It has all the hallmarks of an experimental filmmaking workshop, the kind that is typically incubated at the Sundance Film Festival. It’s no surprise then to learn that the film premiered at the festival. As the credits roll, it certainly prompts the question of the viewer ‘What did I just watch?’. What indeed. There is a dreamlike quality to it, bookended by similar shots. To say too much would be to spoil its unusual surprises. It’s enough to say that there’s a lot going on here.

Ostensibly, it’s an accidental love triangle story framed from the perspective of a female writer/director who has established her foothold in a male-dominated industry. Now Alison is faced with a blank page and that agonising decision as to what she wants to say next about the world and her experiences. As she becomes drawn to Gabe and his similar outlook on life, she starts to question her own values and desires. Levine’s script plays mind games not just with the characters, but with the audience. Is life imitating art or vice versa… or both simultaneously? There are no easy answers here, but that’s the fun of watching this twisty drama about the filmmaking community which is wide open to interpretation – including that metaphorical title (an allusion to Alison’s dangerous edge perhaps?).

The one thing that isn’t open to interpretation here is Aubrey Plaza’s performance as Alison. It’s undoubtedly the indie queen’s finest hour to date. With her unconventional looks, piercing eyes and withering delivery of a killer line, she dominates the film like, well, a black bear. While Christopher Abbott and Sarah Gadon deliver expressive supporting performances, Plaza stakes her territory and gobbles them up with a cheeky smile. Early on, Blair tells Alison that she’s hard to read and that’s a running thought throughout. As different perspectives on Alison and the other characters come bubbling to the surface, the lines between life and filmmaking are blurred further still. While Black Bear is entertaining and amusingly confusing in equal measures, Levine is being too smart for his own good. This overconfidence threatens to imbalance the film’s overall impression.

This could have been a great, Robert Altman-style dissection of the filmmaking process. Instead, it’s just a good, thought-provoking film that sharpens its claws but only scratches the surface of its themes about the fickle nature of the film industry. Too stubborn and ‘difficult’ for general audiences, film buffs should at least get something out of it for hearty post-film discussions.

In short: Sharpens its claws