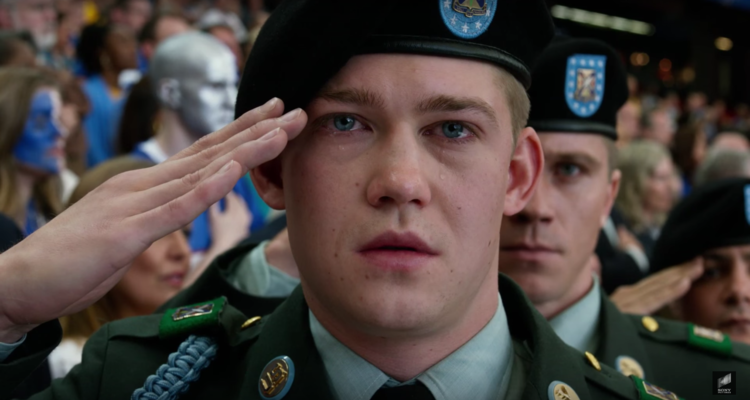 BILLY LYNN’S LONG HALFTIME WALK (USA | UK | China/15A/113mins)
Directed by Ang Lee. Starring Joe Alwyn, Garrett Hedlund, Steve Martin, Chris Tucker, Kristen Stewart
THE PLOT: On returning from Iraq after earning the Silver Star for valour in combat, Billy Lynn (Joe Alwyn) and his squadron are sent on tour around the US, culminating in an appearance at the NFL Thanksgiving Game in 2004, with Destiny’s Child. Through flashback, the audience learns just what happened on the day that Lynn is being hailed for, and the inner conflicts he is struggling with, when considering whether or not to go back to Iraq.
THE VERDICT: Based on Ben Fountain’s satirical noel of the same name, ‘Billy Lynn’s Long Halftime Walk’ lacks the satire that made the book such a success, and in trying to tell several strands of Billy’s story over the course of one day, the film goes from a satire on the commerciality of war and the flag waving nature of America, to a mish mash of stories that really ends up saying nothing.
Joe Alwyn leads the cast as the titular Billy Lynn; compared to the rest of the troop, Lynn comes across as quiet and thoughtful, and even though the film tries to labour the point that Lynn is suffering from PTSD, this never really comes across. Alwyn is fine in the role, but he is really more of a plot point than a character, as others talk at him, and things happen around him but rarely seem to actually affect him. Steve Martin plays a charming but greedy billionaire, Garrett Hedlund plays the loud and strict Sergeant Dime, Chris Tucker plays the man trying to get the squadron a movie deal, Kristen Stewart plays Lynn’s sister Kathryn, who spouts anti-war sentiments that were perhaps fresh at the time in 2004, but feel staid and unoriginal. The rest of the cast features Vin Diesel, Makenzie Leigh, Tim Blake Nelson and Elizabeth Chestang as a faux-Beyonce.
Screenwriter Jean-Christophe Castelli makes his debut with ‘Billy Lynn’s Long Halftime Walk’, although he has worked with Ang Lee in the past, as associate producer on ‘Life of Pi’, and researcher on ‘The Ice Storm’. It seems that Castelli struggled to translate the trademark satire from novel to screen, leaving ‘Billy Lynn’s Long Halftime Walk’ feeling as though it is trying to address everything at once, but ends up actually shining a new or interesting light on nothing at all. The dialogue is expository and uninspired, and the awkward and clunky flashbacks in the film are jarring and do not flow at all. As well as this, there is little dramatic arc in the film, and it seems as though none of the characters learn or grow through their experiences.
As director, Ang Lee plays up the contrast between the decadence of the US and the poverty of the people of Iraq – not so artfully done with flashback – and the stereotypical Americanness of Thanksgiving, football, spectacle and the troops. There is a sequence that feels as though it is hitting the mark, when Lynn and his colleagues find them onstage with Destiny’s Child as dancers gyrate around them, but this is a fleeting moment, after which this biting criticism fades away. As well as this, casting a faux-Beyonce – as well as the rest of Destiny’s Child – does not work on screen. It is so obvious that the most powerful popstar in the world – who recently broke Instagram records with her pregnancy announcement – was not involved in the film at all, as to be laughable. The performances in the film are hit and miss, Garrett Hedlund is about the only actor who comes out unscathed, and Kristen Stewart’s performance is so wooden, it feels as though it hails from her ‘Twilight’ days, as she has greatly grown as an actress since then. The pacing is a mess, and the awkward flashbacks ruin any flow the film manages to create.
In all, ‘Billy Lynn’s Long Halftime Walk’ is a film that tries to be scathing and satirical, but in trying to address too many issues throughout the film, it goes from having the potential to say something new and interesting to a messy, badly paced, heavy handed and unengaging film that fails to deliver on the promise of its one moment of greatness.
RATING: 1/5
Review by Brogen Hayes