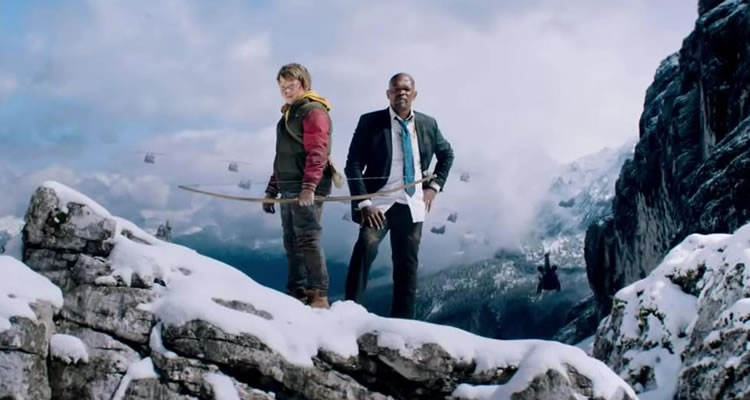 BIG GAME (Finland | UK | Germany/12A/90mins)
Directed by Jalmari Helander. Starring .
THE PLOT: Oskari (Onni Tommila) is sent into a Finnish forest on his 13th birthday to bag some big game and prove himself a man. When Air Force One is shot down en route to Helsinki, Oskari finds himself rescuing the Leader of the Free World and returning home with the biggest game of all.
THE VERDICT: BIG GAME is a wonderfiul, gleefully self conscious movie; heavy on the silly and the overacting, but incredibly funny and wildly entertaining.
The cast are on fantastic from for this B-Movie style adventure; Samuel L. Jackson hams it up as the President, Victor Garber plays his usual morally ambiguous character as the Vice President, Jim Broadbent gets to be bumbling but brilliant, Felicity Huffman plays the stereotypical strong woman in a crisis, Ray Stevenson brings the menace as Morris and young Onni Tommila is part Goonie, part Elliot from ET as the brave Oskari.
Jalmari Helander’s screenplay nostalgically borrows from many of the great movies of the 1980s; there are touches of ET, Flight of the Navigator, THE GOONIES and INDIANA JONES in there, as well as some of the great blockbusters of the 90s, such as Con Air and The Rock. Quips fly during the face off scenes, the President inspires his young friend through rousing speeches, then it all goes a bit James Bond before coming back to Earth in style. The villains’ motivation starts off as a little ridiculous, but somehow when its all tied together in a more recognisable reality, some of the sparkle is worn off the film.
As director, Jalmari Helander ramps up the action and the silliness in the film, while keeping the pacing fast enough that the audience is constantly entertained. Helander also keeps the film gleefully self conscious; this is most definitely a film with a B-Movie feel, but no shame about being a ridiculous romp through the Scandinavian mountains.
In all, BIG GAME is a surprisingly hilarious, nostalgic B-Movie that is well paced, well written and over-acted just right. Jackson and Tommila have a wonderful chemistry that keeps the film going, and the rest of the cast are obviously having fun in this farcical adventure that gets almost everything right.
RATING: 4/5
Review by Brogen Hayes