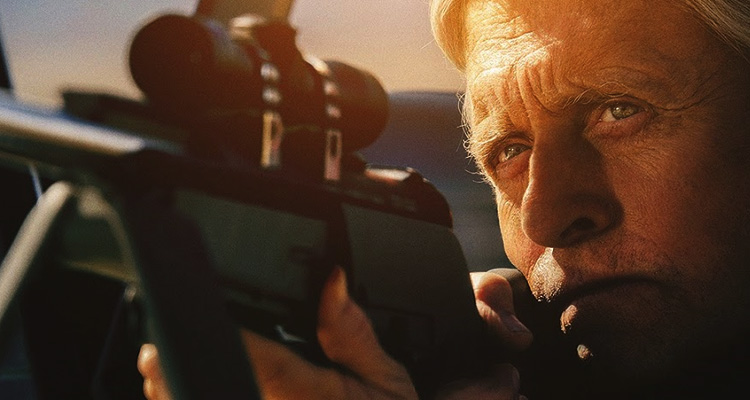 BEYOND THE REACH (USA/Club/91mins)
Directed by Jean-Baptiste Leonetti. Starring Michael Douglas, Jeremy Vince, Martin Palmer, Renny Cox, Hanna Mangan Lawrence, Patricia Bethune, David Garver.
THE PLOT: The hunting guide becomes the hunted when American southwest desert tracker Ben (Irvine) discovers that trigger-happy LA businessman John Madec (Douglas) would rather not face justice for accidentally shooting a drifter (Palmer). Instead, he’d like Ben to take the blame. And if Ben doesn’t like that idea, well, John is just going to have to kill him too. Even if means playing fat cat and nice-guy mouse for an hour and a half. We know Madec is a maniac from the beginning, and not even an all-American idiot either – his car is imported, his gun is imported, and he’s about to sell his company to China. So, you know, the NRA will be happy to disown this particular gun nut.
THE VERDICT: A film all about a city slicker who comes bearing guns and grief to a small desert community – hmm, if only the makers of BEYOND THE REACH had thought of making our boy an Minnesota dentist. Instead, we get an unscrupulous LA businessman, played with relish but without panto baddieness by Michael Douglas (on something of a creative roll these days, with the likes of BEYOND THE CANDELABRA and ANT-MAN), the only almost-interesting element of BEYOND THE REACH.
Jeremy Irvine delivers his nice-guy Ben with a blandness that soon has you rooting for his bullet-riddled demise, whilst the cat and mouse thrills on offer are never even close to thrilling. Even Cameron’s regular DoP, Russell Carpenter, fails to bring this ferociously mediocre offering to life. This doesn’t even belong on Netflix, never mind the telly.
RATING: 1/5
Review by Paul Byrne