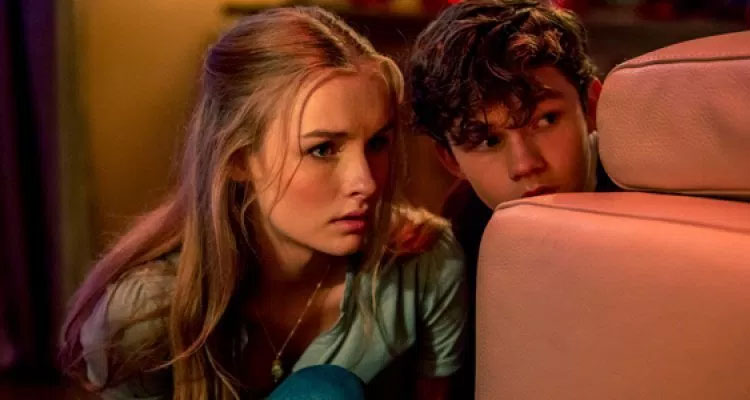 The Plot: It’s Christmas in suburbia and average American parents Deandra (Virginia Madsen) and Robert (Patrick Warburton) are going out for the evening. Their sweet, naïve 12-year-old son Luke (Levi Miller) is staying behind, to be looked after by his attractive, older babysitter Ashley (Olivia DeJonge). Luke has a crush on her, a fact that he shares with friend Garrett (Ed Oxenbould). He plans to make his move, but this is put on ice when a masked stranger comes prowling around the house. He valiantly tries to protect her, but all is not what it seems…

The Verdict: Given Universal’s long, distinguished heritage of horror, they have a keen eye for making smart genre films with an edge. A good example of this was 2015’s Krampus, a delightfully twisted antidote to saccharine Christmas family films. This year’s Christmas present from the studio  is Better Watch Out, a deliciously subversive slice of suburban paranoia. It’s a Jack-In-The-Box treat that springs forth so many surprises and character turns that it immediately marks itself out from the average, typically predictable horror fare.

It’s best not to know too much about the film going into it, as it’s more enjoyable that way. Ostensibly, it’s a home invasion film that references Home Alone at one point, before turning that on its head. This is not a conventional horror film – it may look like it at first, but then the safe zone between the filmmakers and the audience is breached. Then we’re into more unpredictable, Scream-like territory where anything goes. The script, by Zack Kahn and director Chris Peckover, takes great care to establish that conventionality early on, with Luke’s growing pains and longing for some sort of recognition from an older girl all too relatable. It’s a brilliant script, punctuated by a healthy dose of wicked, well-observed teenage humour.

The young actors rise to the challenge of the physically demanding script – you may recognise DeJonge and Oxenbould from another Universal horror, M. Night Shyamalan’s The Visit. They nail the characters and their behaviour patterns so well that the character turns are credible and watertight. With only one other feature credit to his name, Peckover directs with confidence and a touch of visual style. He turns the cheery domestic environment of Christmas into something of a nightmare, where escape isn’t so easy. Better watch out for Better Watch Out. It creeps up on you and delivers laughs, chills and thrills along with a Christmas cracker of a closing shot. Undoubtedly one of the year’s most original and subversive horrors.