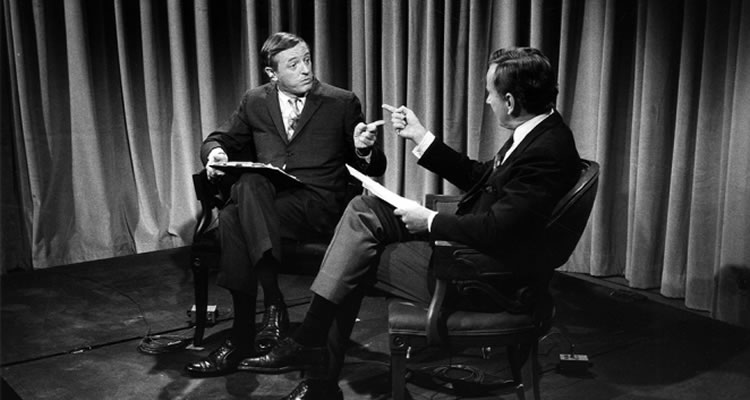 BEST OF ENEMIES (USA/IFI/87mins)
Directed by Robert Gordon and Morgan Neville. Starring Gore Vidal, William F. Buckley, John Lithgow, Kelsey Grammer, Noam Chomsky, Reid Buckley,Dick Cavett.
THE PLOT:While covering the Republican and Democrat National Conventions in 1968, ABC chanced upon the idea of having Gore Vidal and William F. Buckley hash out the issues on national television. What followed changed American television forever, and ended up haunting the two men for the rest of their lives.
THE VERDICT: Filmmakers Robert Gordon and Morgan Neville delve behind the scenes of television history, reminding audiences of the power of debate, but getting tangled in the myth of the men in front of the camera.
The film is told through the debates themselves, readings from the works of William F. Buckey – voiced by Kelsey Grammer – and Gore Vidal – voiced by John Lithgow – as well as interviews with Buckley’s brother Reid, TV producers, biographers and politial commentators. The film goes into great detail about the men, their ideologies, their hatred for one another and the political and cultural climate at the time, but this often to its detriment.
Directors Robert Gordon and Morgan Neville weave the story together well; giving insight into American TV audiences at the time, as well as just what ABC were trying to do and the obvious similarities between these two men who seemed to despise one another. The trouble is that once they start delving too far into the background of the central personalities, momentum and audience engagement is lost. Thank god then, that they have the footage of the sniping, biting and clever debates between Buckley and Vidal to back them up.
In all, BEST OF ENEMIES tries to give too much background into a series of famous TV debates, and perhaps this is the fault of the running time. The debates themselves are fascinating insights into the art of the insult, but the film becomes too tangled between past and present for it to feel cohesive and engaging for its entire running time.
RATING: 3/5
Review by Brogen Hayes