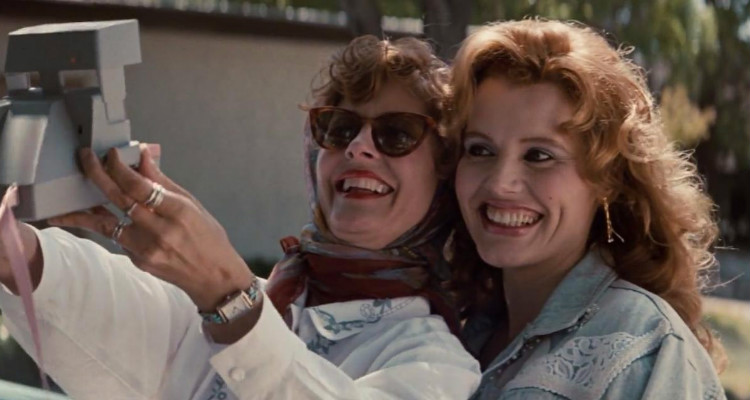 Best Friends in the Movies

Where would we be in life without our best friends? The people who shape us from childhood, indulge our silliness and keep us smiling when things get tough? MISS YOU ALREADY, released in Irish cinemas this week, stars Toni Collette and Drew Barrymore as two friends since childhood, whose lives are shattered by some terrible news.

This week, Movies.ie takes a look back at some of the best friends in cinema; the ones who made us laugh and made us cry…

Thelma and Louise – THELMA AND LOUISE

Ridley Scott’s classic movie is not just a great road movie, but a story of true friendship. Thelma (Geena Davis) is married to a controlling man and decides, along with her best friend Louise (Susan Sarandon) to take a short holiday to get a break. Things turn sour, however, when Thelma meets a man at a bar, who tries to sexually assault her. Louise stops the rape before it happens, but in shooting the man, seals the women’s fate, and the two of them go on the run.
THELMA AND LOUISE is a story of two best friends who find themselves in extraordinary and terrifying circumstances, but stick together, no matter what. The film also celebrates the beauty of the US, comedy found in tragedy and has given us one of the most iconic moments in American cinema in recent years.

CC (Bette Midler) and Hillary (Barbara Hershey) could not come from more different backgrounds; Hillary is rich and privileged, whereas CC has been performing since she was a child, and working for every penny she has. Nevertheless, the two strike up a friendship that serves them through the rest of their lives. A love triangle separates the two for a while, but they come back together when life takes a turn for the tragic and the serious.
BEACHES, directed by Garry Marshall, is another film that shows the strength of friendships, and the seemingly small and silly things that can pull us apart from the ones who love us. The film was a huge success, and the song ‘Wind Beneath My Wings’ has become another icon from recent cinema.

Pixar’s first feature length film explores what happens when children leave their toys unattended; they come to life – as many of us suspected they did – and strike up friendships of their own. When cowboy toy Woody’s (Tom Hanks) reign overAndy’s bedroom comes under threat by the new and shiny Space Ranger Buzz Lightyear (Tim Allen), he reacts with jealousy, but when a plan to get rid of Buzz goes wrong, Woody realises he must make friends with his enemy, whether he wants to or not.
TOY STORY not only celebrates the friendship that grows between a child and their toys, but also the relationship between two of their toys. The film’s message is about accepting people into your life, and the bond formed between Buzz and Woody leads them into many more scrapes in TOY STORY 2, TOY STORY 3 and the upcoming TOY STORY 4.

THE STATION AGENT focuses on Finbar (Peter Dinklage), a man left alone in the world after his only friend died. Finbar is left a disused train station in upstate New York in his friend’s will, and sets out to live there, and keep himself to himself. Of course, fate has other plans, and throws the talkative Joe (Bobby Cannavale) and Olivia (Patricia Clarkson), who is struggling to come to terms with the death of her child, into his life
Less about the friendships that serve us throughout our lives, and more about the friends who appear when we need them the most, THE STATION AGENT is a film that is about people finding comfort in one another, and making the changes they need to make, in order to live happier lives. Dinklage, Clarkson and Cannavale are on strong and beautiful form in this film that examines companionship, as well as love and loss.

Peter and Sydney – I LOVE YOU, MAN

Peter (Paul Rudd) is about to get married, but does not have any close male friends to ask to be his best man. Setting out to rectify this, Peter tries to make friends with men already in his life, but it is not until he meets Sydney (Jason Segel) at an open house, that he finds someone he could possibly strike up a lasting friendship with.
Described as a Bromantic Comedy, I LOVE YOU MAN is a film that celebrates the close bond between men, and the hilarious hijinks they get up to behind closed doors. Segel and Rudd are on fantastic comedic form, and their supporting cast – Rashida Jones, Andy Samberg and JK Simmons – do well with their roles.

Do you have a favourite film celebrating friendship? Let us know in the comments below…