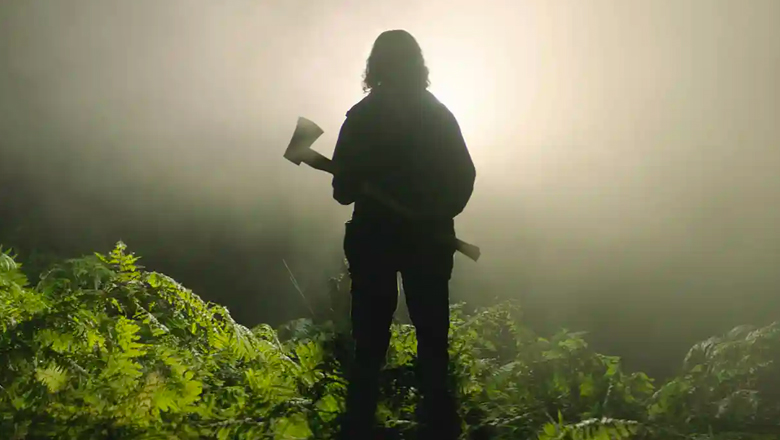 Ben Wheatley interview for IN THE EARTH

Made during the pandemic, ‘In The Earth’ follows a scientist (Joel Fry) who goes into the woods with a park ranger (Ellora Torchia) in search of his lost colleague. Through the night, their journey becomes a terrifying voyage through the heart of darkness.

We caught up with the acclaimed director of ‘Free Fire’ , ‘High Rise’ & ‘Kill List’ to talk about working on this brand new movie in the middle of a global pandemic.

During the pandemic most of us went into panic mode, buying toilet rolls and baking bread, but you started writing a script and made a film. Was this something that you already had in mind, or did the virus inspire it?
It was from scratch, but we went through the same period of toilet roll hunting and breadmaking. One of the good things that have come out is we’re still making bread all the time. We haven’t bought a loaf, which is great.  I started writing it about a week in to amuse myself and shuffle my thoughts around to work out what I was thinking about everything. That is often how these things start for me. They’re characters on the page talking to each other, and we see what they’re good at, what they are up to, and I follow them around like a journalist listening to what they’re saying and writing it down. From that, you get this script, and then you edit it and turn it into something.

Is the virus mentioned in the movie COVID or something else?
It’s our pandemic, but it is different because I wrote the script at the start of it, so I didn’t know how it would go. I wanted to make something contemporary, but it wasn’t about the experience that we’ve all had because we’ve all had it; we all know what it is. It’s not up to me to talk about it. I think movies that talk about these experiences will be made in 10 years; no one really wants to hear about it now. I also felt like modern cinema needs to change after the pandemic finishes. Are we going to just pretend it never happened? I think that’s weirdly disrespectful to all the people who died and disrespectful to our own experience because it was such a big, big, life-changing experience for many people that you can’t just ignore.

Did you set the film in a forest for practical COVID safety reasons or because a forest is a pre-existing set in a sense?
A forest has massive production value basically for nothing because you don’t have to plant it; you just turn up with your cameras, so that’s correct; yes, it is a great set. It is also correct to say it is much safer to film outdoors than it is to film indoors, so that was a big point – we just said look, if we can do it outside, the air will be circulating everybody so a lot of the risks of transmission will go away straight away. We were really aware that it is one thing to go; oh yeah, I really want to make something, it’s another thing to put people’s lives at risk. We didn’t want to be in a situation where we’d orchestrate this thing, and then someone got sick, so that was part of it.  We were really heavy on the PPE side and the mask-wearing and the hand washing and the testing and all that stuff. We did tons and tons of safety but being outside made it that much safer.

One of the things that I love is that Isaac [Joel Fry] is so ordinary. He gets afraid and is full of anxiety. We usually don’t see that in leading men. Was that important to you to show that men can be afraid?
Yeah, that was the whole point. Looking at 1950s sci-fi, the scientist men are always in charge of everything, and they’ve got a girlfriend who usually runs around after the man. There’s usually a military character as well. I wanted to take that and change it so that the main idea was that people have jobs and they’re good at their jobs, but that doesn’t mean they’re good at all jobs. So the science guy out of his environment is useless. She is a forest ranger, so she can do the forest ranger stuff really well. Maybe if the film had been about her in a lab, it would have been a different story for her,  but she’s capable, and she doesn’t suddenly become capable because she’s threatened, that’s the job, you know. So that was it really, you hit the nail on the head. I was excited about it. I based the Martin [Joel Fry] character basically on what I would do, how useless I’d be in that situation. Just the idea of putting a tent up sends shivers down my spine, and just, you know, the fact that he’s lied about doing exercise, I would certainly have lied. I pull Martin from my experience. I have no idea what it’s like to be a fit person who can work well in the woods, so I had to use my imagination for Alma.

A couple of years ago, at the Dublin International Film festival at the Irish premiere of Free Fire, you mentioned using Minecraft to storyboard the film. Did Minecraft feature this time?
Sadly no, there wasn’t enough time, but I still play a lot of Minecraft.

IN THE EARTH is at Irish cinemas from June 18th