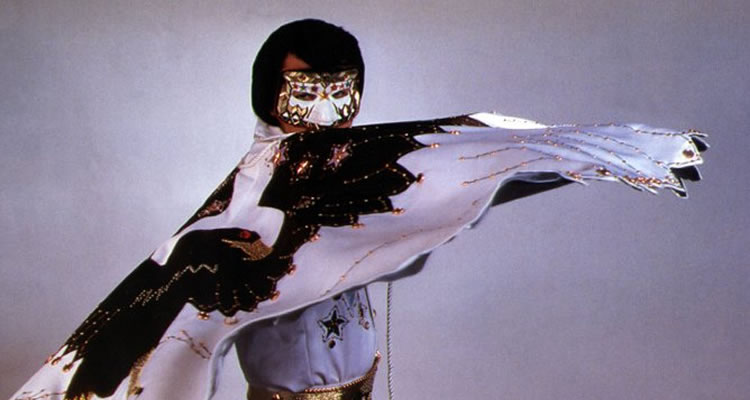 Interview for ORION: THE MAN WHO WOULD BE KING, with director Jeanie Finlay

There have been many pretenders to Elvis’ crown over the years, but few came closer than Jimmy Ellis, blessed – or was it cursed? – with a voice that sounded uncannily like The King’s. Struggling to make an impact in 1970s LA, it was the death of Elvis, and the quick recognition of new Sun Records owner Shelby Singleton, that Jimmy Ellis was transformed into the masked Orion – selling himself not only on that voice but on the blatant hard sell that, hey, this might just be Elvis in disguise.
It was Orion’s incredible rise that fascinated documentary filmmaker Jeanie Finlay, and, given that Ellis always hated wearing the mask, his eventual fall always seemed inevitable. This was Ziggy Stardust if Bowie just decided to milk his alien sex fiend creation dry.

Orion is one hell of a character – when did you first hear about him, and did it take long to decide to make a film about the man?
Jeanie Finlay: My husband and I found an Orion record for £1 at a car boot sale twelve years ago in Nottingham. After taking it home and playing it, I thought, ‘Who is this guy? He sounds exactly like Elvis, but it isn’t’. I did some research, but there was very little online about him. There was just this one little article. It felt like this rollercoaster Nashville story, and the mask was just this sparkly cage. I wasn’t even making films then, I was an artist; I just recognised that it was a great story. Six years later I started pursuing it but it took a while! I started making it before The Great Hip Hip Hoax, Sound It Out, and Panto!

Orion lived out the Ziggy Stardust life – did your feelings towards the man alter from beginning the film to getting it up on screen?
JF: My feeling towards anyone I’m making a flm about always wax and wane with each new interview and as the edit progresses. It’s like peeling an onion. People are complex – I believe your depiction of them should also aim to be complex.

It would be very easy to play this as SPINAL TAP; was there a battle-cry from the start, a determination to tell the Orion story a certain way?
JF: Well, you have to have intergrity as a filmmaker! I always like to listen to the story I’m being told by the people I meet. There’s aspects to the story that are ridiculous and camp but it’s also a real rollercoaster that took me on an emotional journey. I wanted to reflect that in the film you see.

What about deciding between heroes and villains? Can’t say I’d want to give Shelby Singleton that big a hug if I met him. The man was like Col.Tom Parker without the compassion or cuddliness.
JF: I kind of liked his chutzpah! He was tough and at times ruthless but very straight forward about it. I thought of him as a kind of 1970s Simon Cowell figure. He was just way more upfront about his wheeler-dealering than, I suspect, much of the music industry is. As I uncovered in my previous film The Great Hip hop Hoax, it’s a tough industry.

It’s a shame The Jordanaires – who backed Orion at Nashville’s Nightlife Theatre in 1997 – are no more, given that they sung with both the Dylan and the Donovan. Was there anyone from the Elvis camp who had a love for Orion…?
JF: I met with and interviewed the people that were there to witness Orion’s story first hand. The people that were at the heart of everything. The Elvis camp wasn’t really part of the story as they didn’t meet with Orion, which is why they’re not in the film.

Quite a few financiers onboard, including BBC’s Storyville strand – hard to pull the budget together?
JF: Sometimes your job as a director is to convince everyone else that this idea is as awesome as you think it is. It’s always a challenge to pull the money together to finance a feature film and I definitely took a risk – I filmed a lot of people before on a tiny amount of development money. In between showing my previous films in the US I’d fit in an iterview here and an interview there. I’m glad I did as, sadly, many of those people are no longer with us. Once I had about 80 hours in the can I was backed by 330 fantastic crowdfunders, BBc Storyville (this is my third film for them), Creative England, Ffilm Cymru Wales and Broadway. They’ve all been incredibly supportive and aside from the money, which is obviously essential, making the film with their support has been transformative.

I’m guessing it was just a little too expensive to get clearance for Orion’s performance of Elvis songs…?
JF: Never assume anything I always say! It didn’t seem necessary to include Elvis songs – every single time Orion opened his mouth he sounded like he was singing an Elvis song! Also, while he was performing in the mask as Orion, he only recorded his own songs.

Is there a chance your documentary will have a Sugar Man effect, and see Orion’s career reborn?
JF: Well, you never know – all I know is that Orion records now cost four times as much on eBay as they did before the film premiered at Tribeca this year!

It’s all about “talent with a hook”, as one woman says here. Do you think Orion deserved to make it big, or was he was always destined to be a novelty act?
JF: It’s a tricky question and something that’s hotly debated in the Orion fan community. I believe the mask enabled a fantasy to come to life and he had his moment in the sun.

You’ve put together some damn fine music documentaries – where does this particular passion come from?
JF: Well thank you very much. I just feel posessed by some stories and feel compelled to make them into a film. It’s compleetly instinctive – whether it’s naughty rappers, a low budget Panto, a record shop or a masked singer. I don’t get that feeling that often, but I’ve learnt now to just trust my instincts and go for it when I do. They’re not all music docs but if they are, it’s a great excuse to add another layer to the film with a full soundtrack.

Where to next for you…?
JF: I shot at an amazing music festival this year – Indietracks – which brings together heritage steam trains and Indie music, so I’ll be cutting that soon and I have another project on the go that is top secret. I will reveal all when I can but it is a doozy!

ORION: THE MAN WHO WOULD BE KING plays as part of the IFI’s Documentary Festival on Saturday Sept 26th at 9.30pm