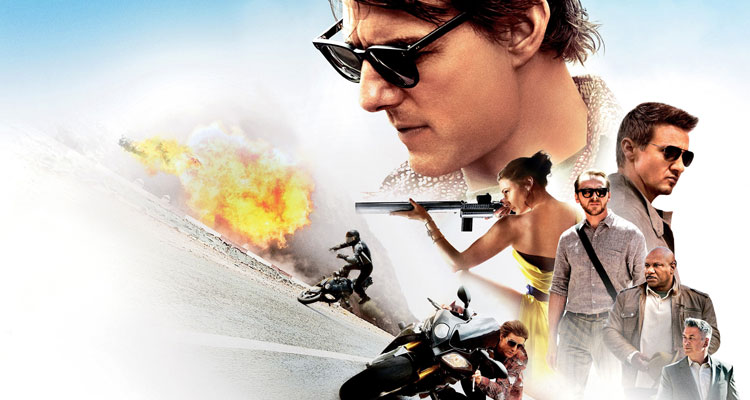 Behind The Scenes of MISSION: IMPOSSIBLE – ROGUE NATION with director Christopher McQuarrie

The fifth instalment of the MISSION: IMPOSSIBLE franchise – ROGUE NATION – just opened on Irish cinema screens. New to the franchise, but no stranger to working with Tom Cruise, director Christopher McQuarrie takes the reigns on this film. Movies.ie caught up with him to talk about what makes a Mission Impossible movie.

What attracted you to the MISSION: IMPOSSIBLE franchise?
Christopher McQuarrie: It sort of came up very unexpectedly. I was working with Tom [Cruise] on THE EDGE OF TOMORROW and we were working on the script one night, and we started talking about films we had worked on in the past and things that we were going to do in the future. Tom just very casually said ‘You should direct MISSION: IMPOSSIBLE’, and without giving it any thought I said ‘Oh, well that would be great’; I thought we were just talking about it informally. A little while later he came up to me and said ‘OK, I’ve talked to everybody and you’re directing MISSION: IMPOSSIBLE’ and that was how I ended up on it.

How did you cast Rebecca Ferguson?
CMcQ: Rebecca was a last minute discovery. We were on a very long process trying to find the right person to play this role. Tom and I had an idea for who we wanted the character to be but we also knew that that was going to be informed a lot by the actor that we cast, so we couldn’t really pick the right actor until we had the role, and we couldn’t define the role until we had the right actor. We had met with a lot of women who were all fantastic and at the very last minute we happened to find a five minute reading that Rebecca had done. Tom and I immediately said ‘That’s her. That’s who we’ve been talking about’.

What was the biggest challenge for you, directing such a huge franchise movie?
CMcQ: The biggest obstacle is always time; there is never enough time to shoot things that you want shoot. Everything else about it was really a dream. It was a great experience; the toys we got to play with and the things we got to do. You imagine something and there is a group of people going ‘Yeah we can do that!’. We were looking at a model airplane, and I said to Tom ‘What if you were on the outside of that?’ and people were like ‘Yes, we can do that!’, so it was really great. You are limited only by your imagination.

You have worked with Tom Cruise so many times at this stage, did this help with making MISSION: IMPOSSIBLE – ROUGE NATION?
CMcQ: We have this wonderful shorthand, we love the same movies, and we love the same movies for the same reasons. I will be lining up a shot and we suddenly just start finishing each other’s sentences while we’re doing it. It’s a little bit challenging for the other actors, especially Rebecca, who was very new to the process. There would be moments where the three of us would be talking about a scene, and Tom and I would feel so clear on what was happening that Rebecca would have to stop us and say ‘I have no idea what’s going on’. Every day was like that. When other people would come in and make suggestions, Tom and I would look at each other and be like ‘That’s not quite it’, and someone else would suggest something and we’d be like ‘That’s exactly it!’. We both are on the same wavelength when it comes to storytelling; it makes making the movie very very easy. Any time there is some sort of disagreement it has more to do with the fact that we are not really communicating. As soon as one of us understands what the other one is after, it just clicks right in.

Were the two days spent filming Tom Cruise on the outside of an airplane some of the most stressful of your career!?
CMcQ: Tom and I have the tendency to go ahead and do things, until somebody comes and tells us to stop! But yes, that stunt was incredibly dangerous. The number of variables… The concern about him falling off the plane was the least of our concerns. Interestingly enough, what kept him on the plane was the pilot; if the plane went beyond a certain threshold, nothing in the world was going to keep Tom on the plane. You could have stapled him to the plane and he was not going to stay on. The other variables, the things that were the most dangerous; he was in a great deal of danger actually on the runway before the plane took off. Any object on the runway that was sucked into the propellers became a bullet, and even if a tiny grain of sand hit him in the face it would have been devastating. Once we were airborne, the biggest concern was bird strikes; a bird hitting Tom at that speed… That would have been it. In every other stunt that we had done with Tom, it was always just about reducing those variables. When he’s on the side of the plane, all of the variables are out of his control and he’s really just at the mercy of chance. That was very nerve wracking. It was a scary couple of days.

There is a lot more of Simon Pegg’s character Benji this time too…
CMcQ: Ethan and Benji’s relationship is the core relationship in the movie. Simon is incredibly funny, but he has some truly dramatic moments in the movie as well. Running throughout the story is the notion of what is the cost of being a spy, and how complicated the world has become for them now. We sort of acknowledge that the world we live in now, and what the intelligence community has turned into in the eyes of the public. Our characters are dealing with that… Specifically Simon’s character.

Does the reality of world politics and violence put pressure on you as a filmmaker to make your baddies more extreme?
CMcQ: Well, it’s interesting. These films are escapism and they’re entertainment, so we don’t want to be reminding you of things that you know perfectly well. Instead, it’s about embracing the audience’s awareness, and using that within the story. You have to walk a very delicate line. We don’t want to ignore what’s going on in the world, but we also don’t want to make what’s going on in the world front and centre so that’s all you’re thinking about, when really what you come to see a movie like MISSION: IMPOSSIBLE for is to be entertained. As such, this one deals with the cost of what they do, more than other ones, but it does it in such a way that it’s not going to ruin the experience.

Do you and Tom have any plans to work together again in the future?
CMcQ: Yes, but I am not ready to say what that is yet. What Tom and I joke about is we’re still working on our first project. The first movie we did together was VALKYRIE; there was never a formal agreement for us to actually make that movie. We started having a conversation about movies in general, and that turned into a conversation about VALKYRIE. I never formally asked him to do it, and he never formally said he was doing it; we just started doing it. As one movie is ending we are always talking about the other thing we want to do, and now we are talking about stuff. Something! Something!