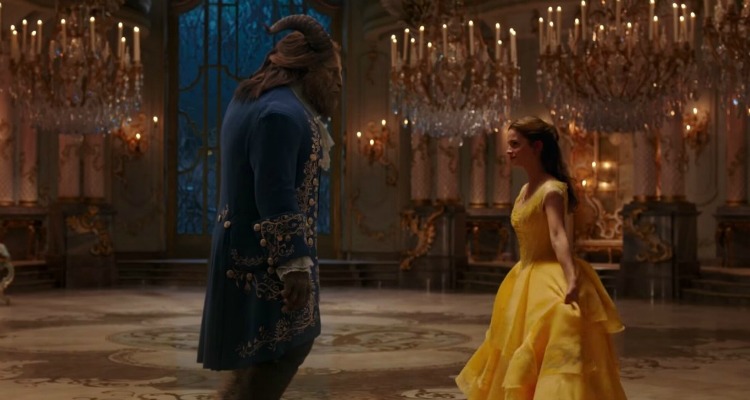 Beauty and the Beast

BEAUTY AND THE BEAST (USA/PG/129 min)
Directed by Bill Condon. Starring Emma Watson, Dan Stevens, Kevin Kline, Ewan McGregor, Luke Evans.
THE PLOT: After he takes a rose from The Beast’s (Dan Stevens) garden for his daughter Belle (Emma Watson), Maurice (Kevin Kline) finds himself imprisoned in Thee Beast’s castle. Belle comes to her father’s rescue and takes his place, and it is not long before Belle realises the castle and all those who dwell within it are under a curse, and time is running out for them. The more Belle gets to know The Beast, the more she sees the kind heart underneath the gruff exterior.
THE VERDICT: It is hard to think of this new live action version of ‘Beauty and the Beast’ without thinking of the iconic 1991 animated film, and this new version is definitely inspired by and takes cues from the original Disney film, but manages to stand on its own two feet.
Emma Watson leads the cast as Belle, and while she has never managed to exude sex appeal, there is a charm to her interpretation of Belle that makes it easy for the audience to love her. As well as this, Watson makes Belle a more independent woman than we have seen before – albeit not by much – and she certainly hits the mark when it comes to singing. Dan Stevens – currently starring in TV’s Legion – makes The Beast gruff but charming, and he truly gets a chance to show off the character’s vulnerability in a way that we have never truly seen before. Luke Evans almost steals the show as Gaston; he camps the character up and has fun with this over the top and egotistical character, Josh Gad happily plays the smarmy sidekick and works well with Evans when they are together. Ewan McGregor makes Lumiére bubbly and effervescent, and works well with the more straightlaced Cogsworth, played by Ian McKellen. The rest of the cast features Emma Thompson, Stanley Tucci, Audra McDonald and Kevin Kline.
The screenplay, adapted by from Jeanne-Marie Leprince de Beaumont’s tale, via the 1991 movie by Stephen Chbosky and Evan Spiliotopoulos stays very close to what Disney have done before, but makes sure that Maurice takes a back seat, while allowing Belle to move to the fore. There are a lot of lines of dialogue lifted from the 1991 film – which will keep fans of the original happy – and if it ain’t broke, don’t fix it. There are times when attempts to fill out the back story – like just what happened to Belle’s mother – are oddly clunky and detract from the story as a whole. As well as this, some of the new songs added to the film add to the romance, but some manage to make the pacing of the story grind to a halt.
As director, Bill Condon brings his ‘Dreamgirls’ experience to ‘Beauty and the Beast’, and there is a touch of magic to the film that comes from the performances, and the over the top musical numbers that not only delight, but manage to move the story along. There are times when the pacing drops, but this is only when the film moves away from the romantic tale at its heart. The production design is beautiful, with the small French town feeling like real places that still exist in the world, and the castle feeling like a true touch of Disney magic. The CGI stumbles in places, but overall, the illusion is complete in ‘Beauty and the Beast’.
In all, ‘Beauty and the Beast’ is a beautiful and faithful adaptation of the beloved 1991 animated film, with the cast rising to the occasion admirably. The songs are a delight, the design beautiful, and the film only stumbles when it forgets that it is a romance at its heart. Oh, and the furore about a gay love story in the film is completely blown out of proportion, just in case you were wondering. Overall, however, ‘Beauty and the Beast’ is a film of wonder and romance, and is a worthy remake of a beloved classic.
RATING: 4/5
Review by Brogen Hayes