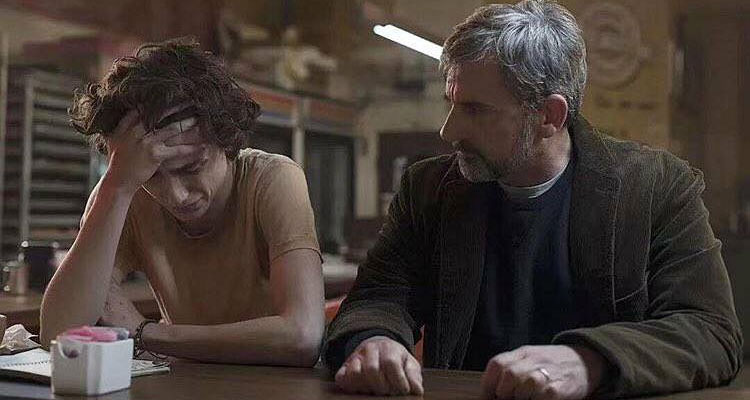 The Plot: Freelance San Francisco-based writer David (Steve Carell) has always tried to do the best for his son Nic (Timothee Chalamet). He loves him more than everything and has always been there for him. With Nic turning 18 and discovering all the possibilities of adult life, David will have to learn to let go. That will be particularly difficult as Nic develops a drug addiction to crystal meth. It rapidly takes over Nic’s life, making him feel better. That is, until he crashes and feels worse. Much worse. Along with his partner Karen (Maura Tierney) and his Los Angeles-based ex-wife Vicki (Amy Ryan), David seeks professional help for Nic. The road to recovery will be fraught with relapses and growing tensions between father and son, which will change the very nature of their relationship…

The Verdict: Amid all the bluster, campaigning and (occasional) mud-slinging of films during Awards Season, some films can slip in under the radar and impress you greatly with how powerful and effective they are by being straightforward. No showy theatrics from its lead actors or vain attempts to appeal to Academy members. Beautiful Boy is one such film and is all the better for it. It’s based on the true story of David and Nic Sheff, adapted from their separate memoirs Beautiful Boy and Tweak respectively. It relates the difficult job of being a father, a parent, a guiding force in a wayward son’s life. It also relates the equally difficult job of being a son and having to deal with the weight of paternal expectations… and the resulting disappointment when life doesn’t go according to plan.

Produced by Brad Pitt, Beautiful Boy comes from Belgian director Felix Van Groeningen. His little-seen 2012 film The Broken Circle Breakdown was a quirky offering – an American-style drama set in Belgium. For his English-language debut, he’s gone to America itself to make an addiction drama that doesn’t hold back from making difficult decisions for its characters and its moving story. This isn’t really a grim film about drugs and their destructive power on young minds. It’s much more a film about how drugs can seriously alter parent-child relationships, to the point where the father realises that he may have nothing more to give. That’s where we find David at several points in the film, desperately wanting to help Nic. He also has to realise that his son is in control of his own life now and has to take responsibility for his actions. Nobody is beyond help though.

That’s the ultimate message of this delicately-made film. It’s clearly the product of much thought and research into how to get the right balance of tone. There are two stories here and both of them shine through the darkness to become life-affirming – but not in a pat, predictable way. Much of that is down to the understated performances of Carell and Chalamet. Carell has proven himself as a dramatic actor of note in recent years. Here, he does some real soul-searching to find the right approach for David. Watch in quiet wonder as the former funnyman takes what might be the most difficult phone call of his character’s life. Building on his already impressive career, Chalamet is impulsive but sympathetic. When Nic relapses and struggles to maintain being sober, it’s heartbreaking to watch – but you can also understand why this is happening thanks to Chalamet’s committed performance.

Beautiful Boy is a very personal portrait of a family in crisis, as well as a realistic depiction of a father-son relationship over several difficult years of recovery. Van Groeningen’s measured direction sensitively handles the addiction aspect, without it overtaking the parent-child theme which is the core of this very fine film. This is an important film that will hopefully prompt discussions about reaching out to help people with the disease of drug addiction, as the end credits suggest. Or it might prompt someone to seek help. It’s not a preachy film and makes a powerful statement in its own unique way. Go see.