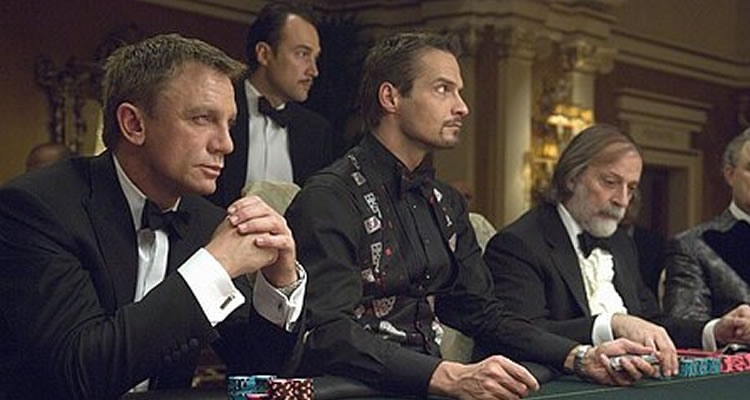 ‘Mississippi Grind’ is released in Irish cinemas this week, and stars Ben Mendelsohn and Ryan Reynolds as an odd couple of gamblers who team up to take on a big win. The film is a slow burn, and an examination of the friendship that springs up between the two men, as well as the risks they take in order to win big.
To celebrate the release of ‘Mississippi Grind’, which also stars Sienna Miller and Analeigh Tipton, Movies.ie have taken a look back over some great gambling movies. Time to roll the dice…

OCEAN’S ELEVEN
This 2001 remake of the classic Rat Pack film from 1960 stars George Clooney, Brad Pitt, Matt Damon, Casey Affleck and Elliot Gould (among others) as a suave and charming criminal gang who plan to rob three Las Vegas casinos simultaneously. Although a lot of focus is not given to the games of chance on the casino floor, ‘Ocean’s Eleven’ is a film that is one big gamble; taking on the casinos and winning.
‘Ocean’s Eleven’ sports a fantastic cast, great soundtrack and spawned two sequels, which were both more about the players than the games, but encapsulated the feel and glamour of Las Vegas

CASINO ROYALE
Turning to the other side of the Atlantic, the gambling action in ‘Casino Royale’ takes place in a Montenegro casino. Newly fledged “00” agent James Bond (Daniel Craig) is backed by MI6 to join a high stakes poker game, with the aim of bankrupting Le Chiffre (Mads Mikkelsen), a banker with ties to many of the world’s terrorists.
‘Casino Royale’ has all the smooth glamour one would expect from a high stakes poker game in a Bond movie, along with plenty of action and romance. The game is tense and fraught with just enough on the line to make Bond reckless and jumpy.

CASINO
Martin Scorsese’s 1995 film ‘Casino’ stars Robert De Niro as Sam “Ace”Rothstein, a mob associate who is sent to the fictional Las Vegas casino the Tangiers, to oversee operations and make sure the mob gets their cut of the casino’s profits. Based on the true story of ‘Lefty’ Rosenthal and a scandal that engulfed the now demolished Stardust casino, the film follows the decline of organised crime in Sin City and exposes the inner working of a top casino at the height of its popularity.

THE STING
Paul Newman and Robert Redford play grifters in the Great Depression, who come up with the brilliant idea of scamming a crime boss out of a vast sum of money. The scam is complicated and lengthy and, in a style copied by many films afterwards, the details of the plan are only revealed to the audience as they happen. Plot covers plot in this dense caper film, but the chemistry between Redford and Newman wins through as the two actors make the film a charming, if sometimes confusing, adventure, which went on to win the Oscar for Best Picture.

CROUPIER
One of Clive Owen’s earliest film roles was as the lead character, aspiring writer Jack Manfred, in the 1998 film ‘Croupier’. To earn some extra cash, Manfred takes a job as a croupier at a casino, but when faced with writer’s block and forced to take part in a robbery, the glamorous and precise life he has created for himself comes crashing down.
Many gambling movies focus on the players, but ‘Croupier’ takes the audience to the other side of the table in a neo-noir film that also stars Alex Kingston and Kate Hardie.

Honourable Mentions to… James Caan’s ‘The Gambler’, ‘Owning Mahowny’ and ‘The Cooler’

‘Mississippi Grind’ is released in Irish cinemas on October 23rd 2015. Watch the trailer below…