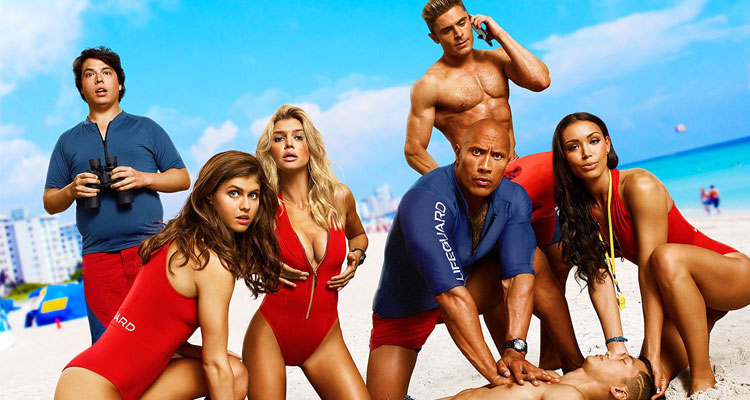 Movie Review
3
Dumb fun
Baywatch (USA, 15A, 116 mins)
In short: Dumb fun
Directed by Seth Gordon. Starring Dwayne Johnson, Zac Efron, Alexandra Daddario, Priyanka Chopra, Kelly Rohrbach, Jon Bass.
The Plot: In the beach community of Emerald Bay, the lifeguards rule. They are the Baywatch. Fronted by committed hardman Mitch (Dwayne Johnson), their jurisdiction only stretches so far. At least, that’s what the local police think. Mitch is more than a lifeguard – he’s a cop without a badge and won’t tolerate any criminal activity on his turf. That brings him into conflict with successful local businesswoman Victoria (Priyanka Chopra), who moonlights as a drug dealer. Before he can take her down, he has to wrestle with the ego of new recruit Matt (Zac Efron). A disgraced former champion swimmer, Matt is desperate to prove himself but Mitch shoots him down quick. Beaches ain’t ready for Matt…
The Verdict: Running for 12 seasons from 1989 – 2001 Babewatch, sorry Baywatch, was a staple of Saturday teatime TV. It was often ridiculed for its sun, sea and hot bods approach to ‘storytelling’. It was ripe for parody and now we have a film version with a new cast. Except it’s not really a parody or even a spoof. Like Galaxy Quest, it’s more of an affectionate poke in the ribs to its origins. It’s also smartly self-aware, inhabiting a world where the TV show and its characters might exist. A character even references this at one point, while original stars David Hasselhoff and Pamela Anderson make cameos to give it their seal of approval (of course).
With six writers onboard, the script could have been an unholy mess. Some critics have already bitten into the film like a shark smelling blood, but this reviewer was mildly impressed with how well-written the gags and in-jokes were. Repeated jokes about slow-motion running and Mitch’s boyband-themed put-downs to Matt hit the mark every time, helped along by spot-on comic timing by Johnson and Efron. Not all the jokes hit the mark though. This being a modern American action comedy, there are the obligatory crude jokes about male genitalia which are over-played and outstay their welcome.
‘Horrible Bosses’ director Seth Gordon knows what he’s got here, so he doesn’t try to re-invent the beach ball. Instead, he has some fun playing around with audience expectations as to what a Baywatch film might be now. Elements from the original show are there, bolted on to a standard cut-and-paste crime film plot. It’s predictable but not unlikeable. Unlike the recent CHiPS, Baywatch is more in tune with its origins and knows how to milk it and tickle the funny bone. The performances are pitched just right too, with Daddario, Rohrbach and Bass playing a sweet trio of characters. Baywatch is dumb fun and is frankly better than it has a right to be.
Rating: 3 / 5
Review by Gareth O’Connor.