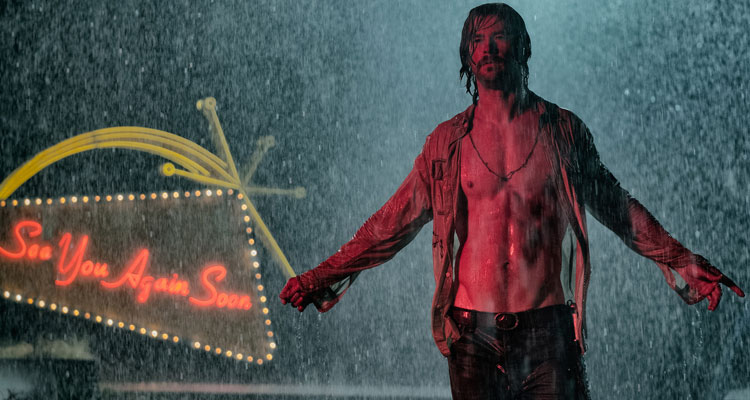 Bad Times At The El Royale

In short: Good times all round

The Plot: It’s 1969 and a group of strangers arrive at the El Royale hotel in Lake Tahoe. Bordering both Nevada and California, the hotel was once frequented by the Rat Pack but is now mostly empty. The only employee appears to be the overly eager Miles (Lewis Pullman). First to arrive are singer Darlene (Cynthia Erivo), salesman Laramie (Jon Hamm) and Father Flynn (Jeff Bridges). Not long after, they’re joined by femme fatale Emily (Dakota Johnson). Nobody is what they seem and nothing is what it seems either in the hotel, which monitors its guests and their activities. Laramie stumbles upon a hidden viewing room then all hell breaks loose, further complicated by the arrival of the mysterious, charismatic Billy Lee (Chris Hemsworth)…

The Verdict: Buffy The Vampire Slayer and The Martian screenwriter Drew Goddard makes a confident return to feature directing after an absence of six years with Bad Times At The El Royale. His debut feature, The Cabin In The Woods, was a Pandora’s Box of delights in which Goddard kept the audience on their toes, not knowing what was going to happen next. It’s a narrative device which also comes into play with his new film, a period neo-noir in which a group of strangers with nothing good on their minds end up in more than a few sticky situations. It might just be one of the year’s most original films, in that Goddard has the characters one step ahead of the audience, while he’s one further step ahead of his characters, pulling their strings and tangling them together when needed.

It’s a cleverly-constructed film, introducing each character in turn while swiftly moving the plot forward, adding a flashback that brings in some backstory, rewinding events and then looking at them from a different perspective. It’s a familiar device that Quentin Tarantino uses to orient his audience in his narrative timeline. Goddard instead uses it here to peel back layers of his characters so that we get to see different shades of their personalities. Everyone has got a secret to hide here, but how those secrets are revealed is part of the film’s charm. There are also suggestions of something bigger happening further up the criminal food chain. To say anymore would enter spoiler territory. It has the atmosphere of a doom-laden Agatha Christie mystery, shot through with a pulpy neo-noir touch that would no doubt make Tarantino proud.

As befitting a Goddard film, it looks and sounds fabulous. Seamus McGarvey’s lush cinematography captures the moodiness of the spacious but confined environment of the hotel. That’s rounded by Martin Whist’s production design and Michael Giacchino’s ominous score. Even the flashbacks look stylised for visual impact. They all complement the actors and their characters, rather than act as fancy window-dressing. At 141 minutes, it’s a tad overlong and as a result, it does sag slightly in the mid-section when Billy Lee comes into the picture. No fault to Hemsworth, but his character is under-written. However, it picks up for a rousing, fiery finale that sends the film out on a high note. When so many films predictably follow the usual playbook, Bad Times At The El Royale marches to the beat of its own pulpy tune. These characters are living dangerously – and looking cool while doing it. Good times all round at this fine establishment.