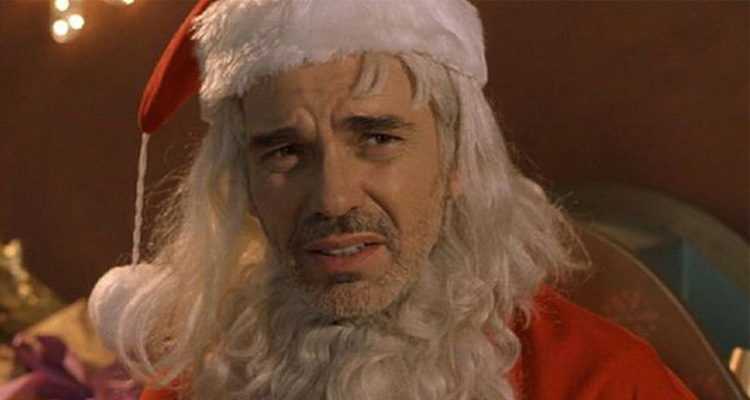 BAD SANTA 2 (USA/16/92mins)
Directed by Mark Waters. Starring Billy Bob Thornton, Tony Cox, Kathy Bates, Christina Hendricks, Ryan Hansen
THE PLOT: “Happy endings are bullsh*t” says Willie (Billy Bob Thornton), while quickly recapping the audience about what happened between the first Bad Santa film and this new instalment. The relationship that Willie struck up at the start of the first film is long over, and Willie is drunk and suicidal most of the time, so when his old frenemy Marcus (Tony Cox) reappears in his life with a plan to rip off a charity to the tune of $2 million, Willie packs his bags and heads to Chicago. The trouble is that Marcus has another accomplice, someone that Willie never thought he would see again.
THE VERDICT: The first ‘Bad Santa’ film was a surprise hit, and a sequel has been in development for some time, but although Thornton and Cox are joined by a great cast, including Kathy Bates, Christina Hendricks and Ryan Hansen, ‘Bad Santa 2’ is the victim of its own profanity, finally living up to its title.
Billy Bob Thornton and Tony Cox reprise their roles as Willie and Marcus, and both characters feel familiar, and as though they have learned nothing since the first film, this may be the premise for a good comedy, but they are let down by a messy script. Brett Kelly also returns to his role as The Kid – also known as Thurman Merman – from the first film, and although he tries hard, he brings precious little to the film. Kathy Bates is on strong form, and tries her best to show the rest of the cast what comic timing really is, while Christina Hendricks and Ryan Hansen are completely underused and never really given a chance.
Johnny Rosenthal and Shauna Cross’s screenplay tries to make Willie and his cohorts wilder and worse than they were in the first film, but filling the 92 minute running time with profanity and sex does not make for an engaging film. There is precious little story to ‘Bad Santa 2’, which leaves the cast and their characters out in the cold, trying to make toilet humour engaging over the course of an hour and a half.
As director Mark Waters never manages to get the ‘Bad Santa 2’ moving fast enough for it to feel anything but drawn out, with the gaps filled with profanity. There is no doubt that profanity can be funny, but less is certainly more; a lesson that ‘Bad Santa 2’ does not seem to have heard of. The cast are let down by a weak script, and their comic timing is most decidedly off, with the exception of Kathy Bates.
In all, ‘Bad Santa 2’ is an unfunny, profane and drawn out film that lacks a story and pace. Bad Santa may have been so wrong it was right, but ‘Bad Santa 2’ is just wrong.
Rating: 1/5
Review by Brogen Hayes