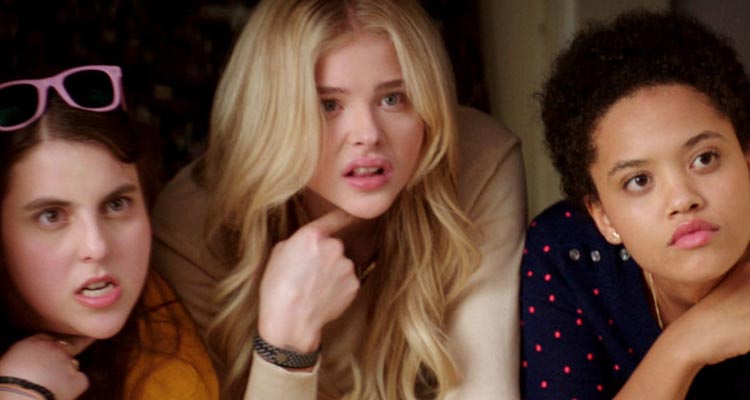 BAD NEIGHBOURS 2 (USA/16/92mins)
Directed by Nicholas Stoller. Starring Seth Rogen, Zac Efron, Rose Byrne, Chloe Grace Moretz, Ike Barinholtz, Selena Gomez.
THE PLOT: Three years after they saw off the fraternity of Delta Psi from the house next door, Mac (Seth Rogen) and Kelly (Rose Byrne) realise their family is about to get bigger, and put their house on the market. With 30 days of escrow looming, all seems well until a new sorority – Kappa Nu, led by Shelby (Chloe Grace Moretz) – move into the vacant house. To see off the girls and ensure that the buyers of their house don’t back out, Mac and Kelly enlist the help of their former enemy Teddy (Zac Efron), who is feeling nostalgic about his days in the house.
THE VERDICT: Only two years after the first film came out, those Bad Neighbours are back with an idea that, on paper at least, feels rather predictable and obvious. The good news is that the story is actually rather self aware, and underneath all the daft humour there is actually a message about sexism and the perception of both young and not as young people.
Many of the cast of the first film return for this second outing; Rose Byrne, Seth Rogen, Zac Efron, Ike Barinholtz, Lisa Kudrow and Carla Gallo all reprise their roles and do well with what they are given. Efron, Byrne and Rogen shine in particular, with their ability to improvise and comic timing really being shown off here. The new members of the cast are led by Chloe Grace Moretz, who has proven time and again that she is more than able to take on comedy, and does well here. The rest of the cast features Abbi Jacobson, Beanie Feldstein, Selena Gomez and Tara Bowles, and they are joined by Billy Eichner and Kelsey Grammer in cameo roles.
The screenplay, written by Andrew Jay Cohen, Brendan O’Brien, Nicholas Stoller, Seth Rogen and Evan Goldberg at first seems like it is going to go down very predictable lines – Girls are worse than boys! Shock! Horror! – and while there is a little of that at the start of the film, the film does touch on the sexualisation of women in American colleges – almost every party thrown by Efron’s character Teddy referred to women as hoes – and the blatant double standard between fraternities and sororities in the outdated Greek system, which is rather strange to us at this side of the world. The jokes still rely on either gross out or stoner humour, but the chemistry of the cast makes these work and the straight up silliness of the film is entertaining and fun.
As director, Nicholas Stoller manages the film well for the most part; the comedy is strong, the timing good and the more ridiculous notions out forward in the film are supported by the absurdity of the film’s idea as a whole. The pacing does struggle from time to time, particularly when the jokes become too gross or too repetitive, but there is plenty to laugh at in ‘Bad Neighbours 2’, especially when the cast are not afraid to poke fun at themselves.
In all, ‘Bad Neighbours 2’ is funny, daft and entertaining; a decent follow up to the first film and one that at least tries to have a deeper message than the one immediately evident. As with the last film, Efron, Byrne and Rogen shine, with the rest of the cast keeping up with them. It’s just a shame that the third act of the film does not live up to the promise of the first two.
RATING: 3.5/5
Review by Brogen Hayes