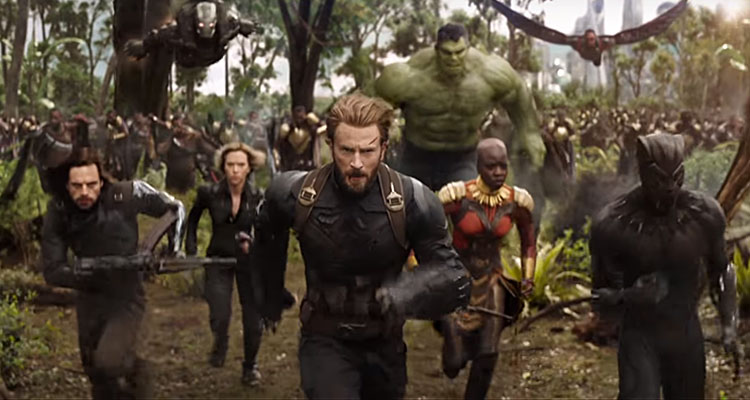 The Plot: Thanos (Josh Brolin), the almost all-powerful master of the universe, is heading to Earth. Having collected half of the infinity stones, he sets out to retrieve the remaining three. Doctor Strange (Benedict Cumberbatch) carefully guards the Time stone, while Vision (Paul Bettany) guards the Mind stone. In order to find the Soul stone, Thanos must re-connect with a face from the past. If Thanos finds all these Infinity stones, then it will give him the ultimate power to destroy the universe as we know it. Standing in his way are the fragmented factions of The Avengers – Iron Man (Robert Downey Jr), Thor (Chris Hemsworth), Hulk (Mark Ruffalo), Captain America (Chris Evans), along with a number of new allies from Earth and beyond…

The Verdict: All roads have led to this. After exactly a decade of the Marvel Cinematic Universe (MCU), the studio’s grand plan is revealed in an even grander dramatic sweep – with Thanos’ meaty arm of course. Ever since his first appearance in the end credits of Guardians Of The Galaxy, The Universe’s Big Bad (TM) has been teased over the past few years. He’s finally stepped properly into the limelight and made his presence felt rumbling through the MCU. Like an earthquake, his mere presence sends seismic shifts through the various storylines of our heroic characters. Change is coming. Thanos demands silence though, so a non-spoilery discussion follows.

Marvel has done it again – and again. Just when you thought it couldn’t possibly fit so many characters into one film and still make it intelligible… They’ve achieved this without so much as breaking a sweat. Memo to DC and Warner Brothers please. When one considers that Marvel has gathered virtually its entire stable of cinematic characters into ‘one delicious pie’ as Paul Bettany has put it, the logistics of doing so are mind-boggling. The secret ingredients to this pie have to be sibling co-directors Joe and Anthony Russo, who have previous form with Marvel. They’ve taken the script by Christopher Markus and Stephen McFeely and turned into it one giant, breathless set-piece that is composed of a few smaller but vitally important components.

There are no sub-plots here, which could have potentially distracted from the doomsday scenario that develops. The script and its delivery has been streamlined for maximum narrative impact, so that it becomes the shortest 2.5 hours in recent memory. While our characters are split up in various parts of Earth and the universe, they all know what they’re facing and the world-changing weight of their actions. Sacrifices will have to be made. It soon becomes clear that Thanos isn’t a motion-captured rent-a-villain like Steppenwolf. Brolin pokes through the animated purple face to give a real menace to Thanos, but he also imbues him with a personality that is multi-layered. His actions speak as loud as his words. Everyone else brings their A-game to the party, with not one character short-changed.

Avengers: Infinity War is the first salvo of a huge showdown focusing on Thanos, with the sequel (not second half, as the Russos have stated) due next year. It can’t come soon enough. This first film might just be Marvel’s finest film to date – not an easy thing to decide upon given their pedigree. It not only matches expectations but exceeds them, delivering a delicious, multi-flavoured pie that comes together without a hitch. Even the post-credit scene at the very end is epic, rather than a throwaway gag. Strap yourself in for one hell of a ride.