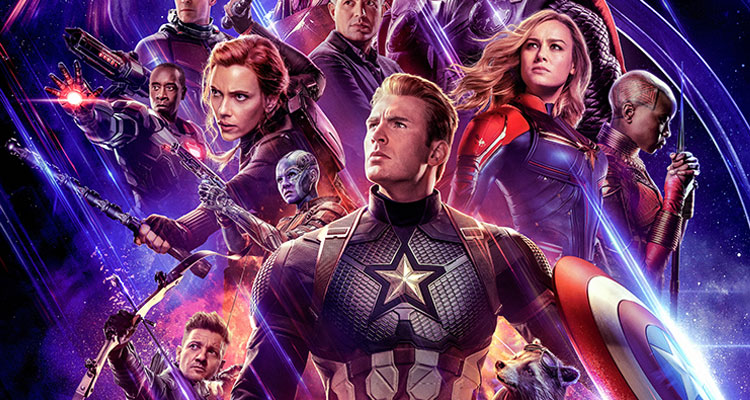 The Plot: Thanos (Josh Brolin) won. He did what he said he would do. Having collected the six Infinity Stones, he snapped his fingers and wiped out half of humanity as a way of balancing the universe. The remaining Avengers are left to pick up the pieces, genuinely not knowing who and what they’re dealing with. But where there’s life, there’s hope. Tony (Robert Downey Jr.), Steve (Chris Evans), Thor (Chris Hemsworth), Bruce (Mark Ruffalo), Rocket (Bradley Cooper), Natasha (Scarlett Johansson), Clint (Jeremy Renner) along with new recruits Scott (Paul Rudd) and Carol (Brie Larson) re-group and consider their next move. That is, if there is a next move…

The Verdict: There will be no spoilers here. Thanos still demands silence – and justifiably so. What unfolds in Avengers: Endgame is best discovered with as little plot information as possible. It’s enough to say that Marvel have done it again. 11 years and 22 films into the Marvel Cinematic Universe, they’ve reached the end of this particular journey. Or, as Tony puts it, part of the journey is the end. Just when you thought that Marvel had raised the bar so high with the superb Infinity War that they couldn’t possibly top it… Well, they have. And then some. They’ve even taken a Thor-style leap well over the bar and raised their game considerably. That’s not hyperbole or a giddy fanboy talking. It’s the truth.

Endgame is best described as the fastest 3 hours you’re ever likely to see. Leave the oversized concession drink behind. Just as the guardians of this galaxy, brothers and co-directors Anthony and Joe Russo, suggested – you’re not going to want to miss a minute of anything that unfolds. There’s no fat here in the storyline. Everything that unfolds is a product of perfectly-balanced storytelling with an even more focused concentration on character development. Given the vast array of eye-popping visual effects on display, the Russos have rooted the visuals more deeply this time in a bedrock of strong characterisation. That’s not always the case with superhero movies, but these characters are family to each other. Perhaps to us too over these many years sitting in the dark and admiring their heroism and unwavering commitment to justice.

The story beats take surprising turns – more so than usual for a Marvel film. It’s quite a daring and intricate film in its structure. Just when you think you’ve got the film’s main plot pinned down, the Russos take you down another delirious rabbit hole. It’s consistently fresh and imaginative, without tying itself in narrative knots. Legacy is a big theme in the film and it’s something that is so subtly done that you may not notice it at first. Every character gets their moment, bringing their character arcs full circle – with a victory lap for good measure. A seamless union of many different story strands which show solid character progression which then unite for a spectacular third act. But it’s the little moments that stand out the most. Characters sitting, talking, reflecting, laughing. Doom-laden superhero movies aren’t meant to be so funny and introspective, are they? They are now. Story is king here.

Marvel have won. They did what they set out to do. They re-invented the superhero movie, moving it away from its somewhat campy origins and bringing a modern, more thoughtful sensibility to it. All of this with increasing quality, not the other way around. With Avengers: Endgame, they really have surpassed themselves and delivered a modern masterpiece that is more about character than about spectacle. There are no end credits teasers this time, but that’s not an issue. The whole film is a treat and the end title credits are worthy enough to keep you in your seat a little longer. If part of the journey is the end, then what an ending.