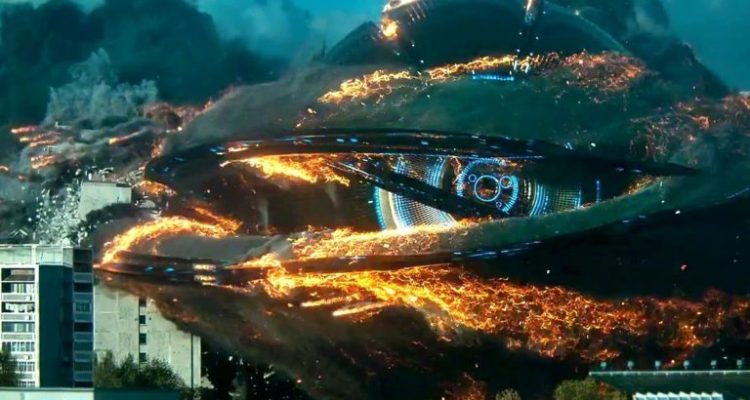 Attraction (Russia / 15A / 132 mins)
Directed by Fedor Bondarchuk. Starring Irina Starshenbaum, Alexander Petrov, Rinal Mukhametov, Oleg Menshikov.
THE PLOT: Teenager Yulya (Irina Starshenbaum) has always been a stargazer. She’s about to have a close encounter of her own kind soon enough. During a meteor shower, an alien spacecraft approaches Moscow and is shot down by the military. During the crash, it causes immense damage to the district and kills Yulya’s best friend. Her military father Colonel Lebedev (Oleg Menshikov) is put in charge and the district goes into lockdown, with curfews and a growing resistance against a truce between the humans and the aliens. It’s at this point that Yulya encounters apparently humanoid alien Hijken (Alexander Petrov)…
THE VERDICT: Russian sci-fi has a long and distinguished history, going back to Andrei Tarkovsky’s ‘Solaris’. It tends to be more thought-based and culturally infused with a Russian sense of weighty themes. More recent efforts have included the frankly bonkers ‘Night Watch’ and ‘Day Watch’. The latest contribution is ‘Attraction’, an unlikely-sounding title for an ostensibly doomsday film. That is, except for the fact that it isn’t really a doomsday film. Its closest American comrades would be John Carpenter’s ‘Starman’ and ‘The Abyss’.
The film starts as an alien spacecraft shaped like an eye with the rings of Jupiter spinning around it crashes into Moscow. It’s a spectacular and literally eye-catching sequence which, ruble for ruble, matches anything Hollywood could stage. Following this, the story could have gone down an immediate and obvious Us vs Them route of conflict that so many alien invasion films follow. Instead, director Fedor Bondarchuk contrasts the epic with the intimate, as Yulya sets aside her prejudices and accepts that she may hold the key to an inter-species understanding.
For the most part, the story works and Bondarchuk keeps the busy plot moving with a sense of urgency. Well, except for a sagging mid-section which unnecessarily slows down to a trickle as Hijken and Yulya wander off to discover what it means to be human. It might work in Russia, but it comes across as too cutesy and convenient here in the decadent west. Maybe something was lost in the translation.
Bondarchuk uses the large IMAX 3D canvas in much the same way as his explosive previous film, Stalingrad. He scatters clouds of ashes, debris and chunks of buildings all over the place with glee while staging some ordered chaos involving large crowds. It’s a visual feast for sure, with quality production values to match. The performances are pretty good too, lead by Brie Larson-lookalike Starshenbaum. While not a classic slice of Russian sci-fi cinema, ‘Attraction’ has its moments and is meaty enough to be entertaining and thought-provoking at the same time.
RATING: 3 / 5
Review by Gareth O’Connor