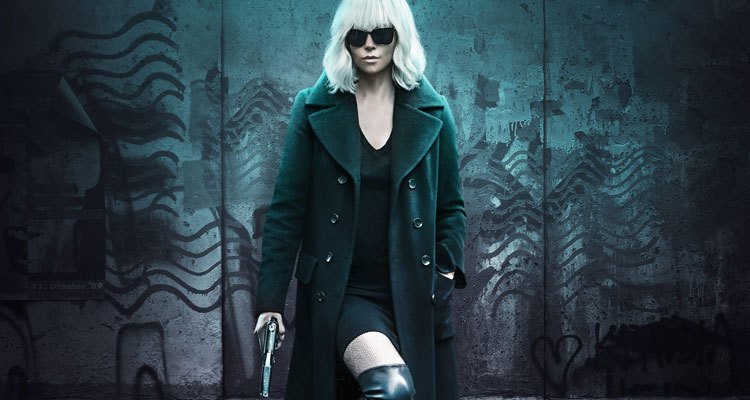 ATOMIC BLONDE (Germany | Sweden | USA/16a/115mins)
Directed by David Leitch. Starring Charlize Theron, James McAvoy, Toby Jones, Eddie Marsan, Sofia Boutella.
THE PLOT: In the few days remaining before the fall of the Berlin Wall – ands thus, the end of the Cold War – MI6 agent Lorraine (Charlize Theron) is sent to Berlin to retrieve The List; a sensitive document containing the names and actions of many Western secret agents. While there, Lorraine is also tasked with getting fellow agent David Percival (James McAvoy) under control, and finding out the identity of a mole within MI6.
THE VERDICT: Based on the graphic novel ‘The Coldest City’ by Antony Johnston and Sam Hart, ‘Atomic Blonde’ has been a passion project for Charlize Theron, who brought in ‘John Wick’ co-helmer David Leitch to direct the project. Although there are touches of ‘John Wick’ about the film – as well as Bond, Bourne and any other over the top action flick you care to name – ‘Atomic Blonde’ ends up being much less than the films it cribs from.
Charlize Theron leads the charge as the badass, alluring and ruthless MI6 agent Lorraine, and although it is clear that Theron is more than able to take on the hyper-physical role and make it her own, there is very little else to the character, meaning the audience has little reason to root for her to complete her mission, or even to survive. James McAvoy is underused, but obviously has a ball as the renegade agent David Percival; chewing his way through the scenery and making much more of the role than there obviously was on paper. The rest of the cast features Eddie Marsan, Toby Jones, John Goodman, Til Schweiger and Sofia Boutella in supporting roles and they, by and large, are completely underused in this vapid and thin spy flick.
Screenwriter Kurt Johnstad adapted ‘The Coldest City’ for the big screen, shoehorning in a lesbian romance along the way, in an attempt to make Lorraine more relatable, but this just furthers the feeling that ‘Atomic Blonde’ is a film created for teenage boys, who will love the gratuitous violence, nudity and random lesbian love scenes. The story for the film is both overly simplified and completely convoluted at the same time, with the precious few scenes in between the sex and violence that are obviously there to make the audience care for the lead character and give her reason for kicking all kinds of bad guy butt, becoming more and more complicated, as the story trips over itself in an attempt to be clever.
Director David Leitch not only cribs from Tarantino, ‘Bourne’ and Theron’s own vehicle (sorry) ‘Mad Max: Fury Road’, but from his own work on the ‘John Wick’ films. It is clear that the intent is to make Lorraine as badass and ruthless as ‘John Wick’, but even though Leitch succeeds at this in terms of the action, the beauty of ‘John Wick’ was the simplicity of the story, which allowed for the violence and mayhem to ensue and to be fun, this beautiful simplicity is lacking in ‘Atomic Blonde’. Much of the film gets tangled up in trying to be a smart thriller, but it struggles with pacing issues, underdeveloped characters and a soundtrack that is cool initially, but ends up trying to paper over cracks that are too large for even Cat People by David Bowie to cover. The look of ‘Atomic Blonde’ alternates between washed out and grimy and overly stylised and coloured, and although the over the top violence we loved in ‘John Wick’ finally kicks in, ‘Atomic Blonde’ has spent too long drowning in soundtrack, neon lights, double crosses and lacklustre characters for this to seem like fun and not a chore.
In all, ‘Atomic Blonde’ should have been as fun, over the top and silly as ‘John Wick’, but it gets lost in production and caught up in its own myth. Charlize Theron is undeniably bad ass, but even she cannot shake off the strange tone of the film, nor wade through this over thought, over produced and tiresome attempt to make the cold war cool again.
RATING: 2/5
Review by Brogen Hayes