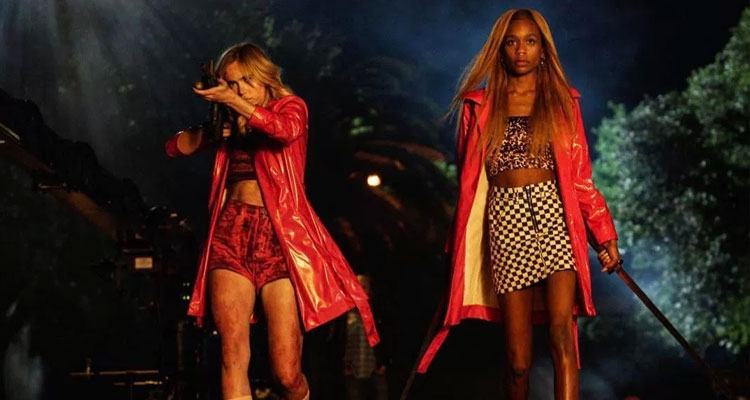 The Plot: In a small American town, reputation is everything. Teenager Lily (Odessa Young) knows this all too well. Smart and self-aware, she’s clued in to all the school gossip and scandal happening in social media. She has her own clique of friends – transgender Bex (Hari Nef), Sarah (Suki Waterhouse) and Em (Abra) who are her sisterhood. A data hack by an anonymous hacker exposes first the proclivities of the town mayor and then the school principal. Lily and her friends enjoy the scandal – until the spotlight is turned on them when the whole town’s data is exposed. Lily has her own secret relationship, much to the shock of her parents. Hysteria grips the town and the finger of blame is pointed at Lily, prompting a battle royale and a fight for survival against vigilante groups…

The Verdict: Brace yourself for Assassination Nation. This ambitious and hard-edged satire of American smalltown mores and the invasive influence of social media comes at you like a freight train at night. It’s loud, pulpy and hyper-violent but is also very smart in the way it chooses its targets, then hits the bullseye repeatedly with one superb scene after another. Written and directed by second-timer Sam Levinson, it takes a glimpse into the secret world of teenage girls. The cliques, the social pressure to conform, the need to live out their lives online, the risk-taking with risqué photos. Well, with a heightened sense of reality of course. It’s been compared to The Purge franchise, but Levinson’s cleverly constructed film is more sophisticated and direct in its approach.

It’s no coincidence that the town in the film is called Salem. With a nod towards the 17th Century witch-hunts and trials in Salem, Massachusetts, Levinson whips up a frenzy as the data hack turns locals into angry villagers. They’re armed not with pitch-forks and burning torches, but with serious-looking guns and ammunition – the American way of course. Lily and her friends find themselves to be convenient scapegoats and fight back with guns in their blood-red coats. It’s a good while before we get to this terrific sequence, but the build-up has been so carefully choreographed by Levinson and his team that that blood-letting is a necessary release from this tightrope of tension. It’s in the same bloody vein as Heathers, but with a 21st Century spin on how reputations and lives can be ruined by inappropriate behaviour.

It’s a film that speaks very much to the now, whether that’s #MeToo, Trump’s increasingly divided America or the rise of right-wing groups. There’s a political angle in Levinson’s film, but it doesn’t overtake the well-written satire of high school life or its cast of colourful characters. Lily is such an interesting character – sassy and audacious, not the good girl but not exactly the bad girl either. She’s just who she is in shades of gray, take it or leave it. Young keeps the audience on their toes as to whether to retain sympathy for Lily, delivering a strong performance. Not all of it works of course. Sometimes the story veers into uncomfortable territory, but Levinson then pulls it back before it goes too far. This extends to the slightly abrupt ending, which delivers a hearty laugh nonetheless. This is a satire with teeth.

Assassination Nation won’t be to everyone’s taste, but it’s edgy, stylishly made and super cool in its approach to its subject matter. The fact that it has something important to say about modern teenage life amid all the scandals and shoot-outs is an indication that it’s a product of much thought. What you take from it may depend on how much you enjoy it, but there’s no denying that it’s a striking, audacious film that is unlike anything else out this year.