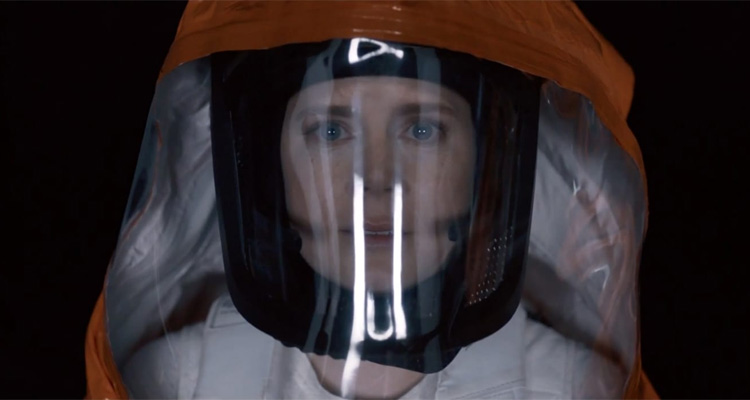 ARRIVAL (USA/12A/116mins)
Directed by Denis Villeneuve. Starring Amy Adams, Jeremy Renner, Forest Whittaker, Michael Stuhlbarg, Mark O’Brien
THE PLOT: When 12 alien craft arrive on Earth at different pints across the globe, the first thing everyone wants to know is why they are here. Language specialist Louise Banks (Amy Adams) is drafted into the arrival site in Montana to try and translate the alien language. All is not so simple however, and Louise and scientist Ian Donnelly (Jeremy Renner) have to first learn the alien language before they can begin to ask questions.
THE VERDICT: Based on the short story ‘The Story of Your Life’ by Ted Chiang, ‘Arrival’ marks the first foray into science fiction by director Denis Villeneuve – who previously brought us ‘Prisoners’, ‘Enemy’ and ‘Sicario’ – but will not be his last as he is currently working on a new version of ‘Blade Runner’. Those familiar with Villeneuve’s style will not be disappointed with ‘Arrival’; a film more about understanding than action.
It comes as no surprise that Amy Adams is on strong form as Louise Banks, and more than able to carry the film. Any emotion that the audience experiences comes from Adams’ performance, and although it may seem as though we do not learn much about the character – other than her dedication to her work – all becomes clear as the film moves forward. Jeremy Renner is a nice counterpoint to Adams, with their chemistry and respect for one another evident on the screen. Renner has considerably less to do than Adams, and seems to be there to back her up, but they are strong together on screen. The two are backed up by Forrest Whittaker, Michael Stuhlbarg, Tzi Ma and Mark O’Brien.
Eric Heisserer’s screenplay – adapted from Ted Chiang’s short story – focuses on the unsettling beauty of Montana and the fact that this is where the aliens chose to land. The script cleverly shows the audience much of the vital information in the story, rather than telling us, meaning that we are along for the journey with Louise Banks, and learning as she does. As well as this, this style of storytelling makes for a satisfying cinematic experience, even as we know we ill not quite get all the information until the closing moments of the film. As well as this, there is a serious twist to proceedings that is foreshadowed well, and although thus may not come as a surprise to the more astute audience members out there, it makes the film more one about communication than conflict.
As director Denis Villeneuve ramps up the unsettling feel of the film, but also keeps the beauty of the co-operation and the location evident, and the humanity on both sides of the species divide is all too real throughout ‘Arrival’. Villeneuve paces the film extraordinarily well for an alien arrival film that is not an action flick, and although there are very few set pieces throughout, ‘Arrival’ is a film that is full of suspense and intrigue, and keeps moving for all of its almost 2 hour running time. There are times when it looks as though ‘Arrival’ is going to way of ‘Contac’t, but this is quickly avoided, and although the closing moments of the film border on the twee and saccharine sweet, it is hard to pick this apart since we have been told all along that this is where it is going… It just gets there with a little sci-fi twist. Jóhann Jóhannsson’s score and Bradford Young’s beautiful cinematography enhance to action on screen, and reinforce the eerie feel of the film.
In all, ‘Arrival’ is an eerie, unsettling film about communication and language. Adams and Renner are on strong form and work well together, the script is smart and Denis Villeneuve’s direction is top notch. Those wanting a crash bang wallop alien flick need not apply, but if beautifully shot, eerily unsettling flicks about worlds beyond ours are your thing, then your film has… um… arrived.
RATING: 5/5
Review by Brogen Hayes