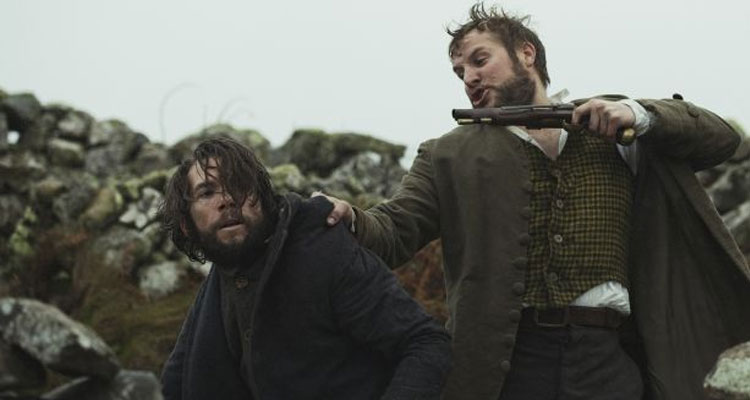 ARRACHT is a new Irish language film set during the famine in 1845. Colmán Sharkey is a fisherman, hunted for crimes he did not commit. Unable to protect his family from death he is subsumed by darkness until a helpless little girl saves him from despair.

Were there any unique challenges with an As Gaeilge production?
The only time the language was an issue was when we had to find Kitty (the young girl of the film). You can only cast your net so wide if you only have 15 – 20 possible schools. She had to be from that area, she had to be from Connemara for me that was important. She had to be from the same place as the lead actor (Dónall Ó Héalai).

Does Saise come from an all Irish speaking school like yourself?
So Saise comes from Spideal and was educated through Irish. Actually her grandfather is Bob Quinn the filmmaker who lives down there. He wrote and directed the first live-action Irish language films, ‘Poitín’. That is an odd coincidence but another strange coincidence is I’ve worked with her uncle Robert Quinn and her aunt Hannah Quinn is also a director so there you go

What was like working with Dónall and Dara (Devaney) because it’s an intimate story with few characters.

When Dónall came onboard he lost approximately 4 stone in about 4 months. He brought this physicality to the performance and he said there wasn’t much acting to it, a lot of it was the scenes where he is alone in the cave and where he is almost starving. I explained to him that we don’t have the budget to tell the famine story, to show thousands of people starving or workhouses or emigration ships so we have to show this plight through you. This brought another level to the production and helped everyone in terms of performance. I admired Dara’s work over the years and he like Dónall brought it from day one.

What’s it been like bringing the story of the famine to places around the world?

Any storyteller or filmmakers goal is to communicate a story and incite empathy for the characters and their plight. So that’s been a pleasure because when someone from Estonia asks you about the Famine and you then have them learning more by looking stuff up online and coming back to you to learn more it’s brilliant. I think this has to do with most countries having something like this in their recent past. It has a weird kind of consoling effect on people because it’s like we have something in common, all nations suffer. It’s definitely been something I didn’t expect.

Would you couple ‘Arracht’ with ‘Black 47’ in an Irish double bill?

Yes I would, they’re both films set in a very formative time in our history and there haven’t been any other ones up until now. I think what Lance Daly did for us is paved the way and he gave us the license to try other things because when ‘Black 47’ was doing the rounds I was just writing the script for ‘Arracht’. They are undeniably linked as films but what is great about them is they are very different as films.

What do you hope audiences in particular Irish audiences get out of ‘Arracht’ ?What I would hope from any film I make would be that people empathise with the characters and that they are entertained and that is first and foremost. Now from that, I hope that Irish people would get from it a sense of pride because there’s a heroic element to Cólman and the film centres on human resilience and I think we should all be very proud of because I think the Irish nation has come to where it is now on the back of great suffering and it’s something we should never forget but in remembering it I hope it puts a positive slant on people’s lives now.

ARRACHT is at Irish cinemas from Oct 15th