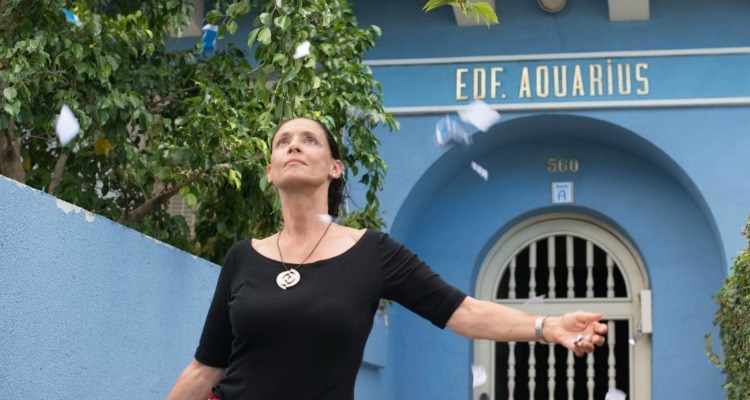 AQUARIUS (Brazil | France/18/146mins)
Directed by Kleber Mendonça Filho. Starring Sonia Braga, Maeve Jinkings, Irandhir Santos, Humberto Carrão, Zoraide Coleto
THE PLOT: Clara (Sonia Braga) is the last resident of the ‘Aquarius’ apartment building, a space that developers want to tear down to make way for something new. Clara vows never to move out of her apartment until she makes her final journey, which leads to her engaging in a cold war with the developers, and Clara looking back over her life and the memories she has made in her home.
THE VERDICT: It would be easy for Clara to be drawn as an older woman who is doddery and stubbornly refusing to move because she is weak, but writer/director Kleber Mendonça Filho carefully creates Clara’s world, making her a strong and defiant character who refuses to be forgotten.
Sonia Braga gives the performance of her career as the powerful and strong yet vulnerable Clara, and we see the film through her eyes. Braga never allows Clara to bow to pressure and bullying, but blends this carefully with a woman who is facing not only the loss of her home, but also the idea of being forgotten as a person, since Braga makes it clear that this is about more than just the place where Clara keeps her stuff. The rest of the cast features Maeve Jinkings, Irandhir Santos, Humberto Carrão and Carla Ribas.
Kleber Mendonça Filho’s screenplay carefully blends the past and the present throughout the film, while including a hint of the future. The script carefully makes Clara a strong woman who is not without her insecurities and vulnerabilities, which makes her a totally rounded character that it is easy for the audience to relate to. The dialogue is strong, and although there are times when the film feels as though it is rambling and overly long, but when everything comes together in the end, it is emotional and engaging.
As director, Kleber Mendonça Filho paces the film well enough; although it is overly long at 142 minutes the audience stays engaged for the running time. Filho has also coaxed wonderful performances from her cast, especially Sonia Braga, and created a feel of home, as well as nostalgia and a view to the future throughout the film.
In all, ‘Aquarius’ shows Sonia Braga off to be the powerful actress she is; Braga easily carries the film and makes the leading character one for the audiences to root for, as we are able to see her wonderful unique qualities through the script and direction. Of there were to be a complaint, it would be at 142 minutes, ‘Aquarius’ often feels overly long.
RATING: 4.5/5
Review by Brogen Hayes